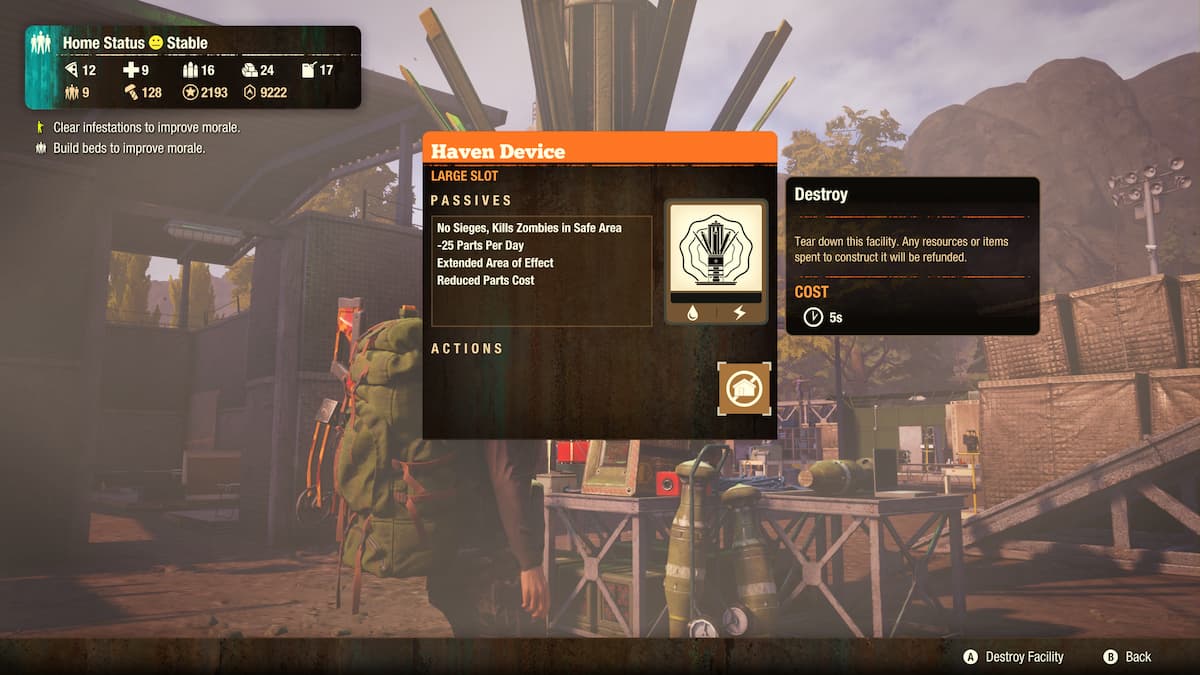 Dealing with sieges on your base in State of Decay 2 can be an exhausting experience. The larger your community becomes and the more facilities you install will cause the zombie risk bar in your base to go up, requiring you to return to your base and fight off a horde of enemies or risk your community members to die without you there. However, a new facility added in the Homecoming update will remove that from the equation. Here is how to get the Haven Device in State of Decay 2.

The Haven Device in State of Decay 2 is a facility that will take up a large slot in your base and kills any enemies that step into the radius of your base’s area. You will know when a zombie is being affected because their eyes will turn green, and their head will explode shortly after.

There are two ways to get the Haven Device. The most direct way is to load up the Trumbull Valley map and play through the Meeting CLEO storyline. You will first need to find Mickey Wilkerson and then help him, Izzbee, and Dr. Hoffman out with any missions they contact you about. Focus on the Izzbee missions in particular for this.

After about 12 in-game days, Dr. Hoffman will contact you, saying they would like to install the Haven Device in your base. Return home, and the group will be waiting for you. Talk to them and be ready for a fight. Installing the device will cause a siege that lasts for four minutes. You will see a lot of zombies and multiple freaks during this time. Survive, and the device will be set up.

The second way to get the device is to trade for it in someone’s game that has already gotten it. The facility mod needed to build it is called the Haven Capsule. If someone has already earned it, they can tear down the facility and give you the mod. It weighs 125 lbs, so don’t go running around with it. You can uninstall and reinstall the facility whenever you want, but you will have to go through the four-minute siege when you do each time.

While the Haven Device is set up in your base, you will need to provide it power. It does have a battery that will allow it to stay on without power for a while, but eventually, it will shut down. If you have implemented the Builder’s Boon at the beginning of the game, you will have no worries here. If not, you will need either a generator facility or claimed an outpost that gives you electricity. There are no mod slots on the facility, so the generator mod will not work. Additionally, the Haven Device will cost you 25 parts each day to continue working. If you have water for your base, this daily intake is reduced to 11.