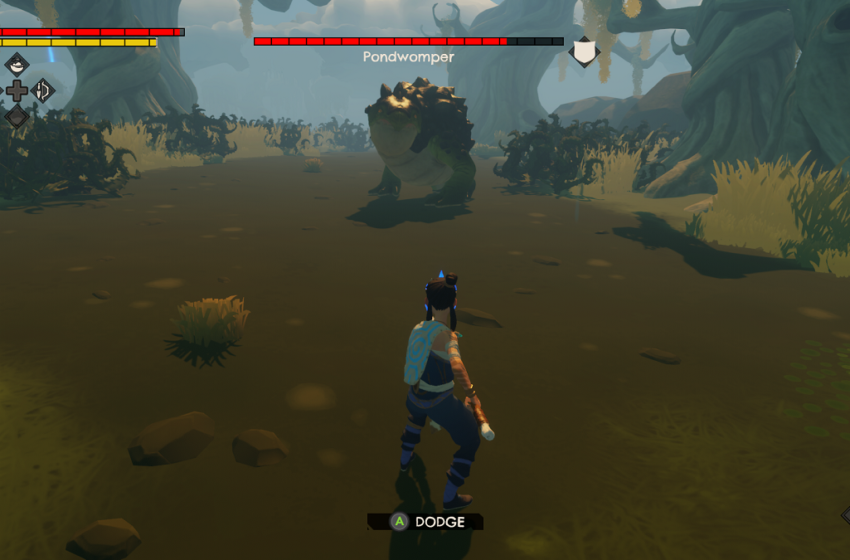 Pondwompers, like Gloomharrows, are one of the toughest enemies to defeat in Windbound. These large, frog-like creatures inhabit swampy islands, and with their poison-specific attacks and hefty frames, they aren’t pushovers. If you beat them, though, they drop special items that you can craft boat upgrades and other items with, so it is worth taking them on.

You will know you’re about to encounter a Pondwomper if you hear plodding, trombone-led music kick in as you explore marshy islands. Pondwompers won’t attack you unless you get too close or attack them first, so you can pass them by without them noticing you.

If they do get startled, prepare for battle. Their first reaction is to retreat inside their shell and release a cloud of toxic gas. If you’re too close, you will get poisoned for 10 seconds, which slowly depletes your health.

Pondwompers will always resort to that tactic first, but if you continue to engage them, they will attack. Their main moves are poison-based too, and they will either breathe toxic gas in your direction or fire a poison-filled blob at you. Use your dodge move to evade these attacks or, again, you will be poisoned.

Occasionally, Pondwompers will retreat to a safe distance. They’re lining up a long-range jump attack, and if you remain stationary, it will knock off a chunk of your health. Lock onto them and, as soon as they jump, dodge twice in quick succession to move away from their landing area.

After every attack, Pondwompers are vulnerable before they go on the offensive again. Use this time to stab them with a spear or pepper them with long-range attacks, such as arrows, rocks, or sling bombs. Don’t get too cocky, or they will attack you without you having time to react.

Once you defeat a Pondwomper, you can interact with their corpse to get one shell fragment and two poison glands. Shell fragments can be used to make armor for yourself or your boat, and poison glands can be crafted into poison sling bombs.