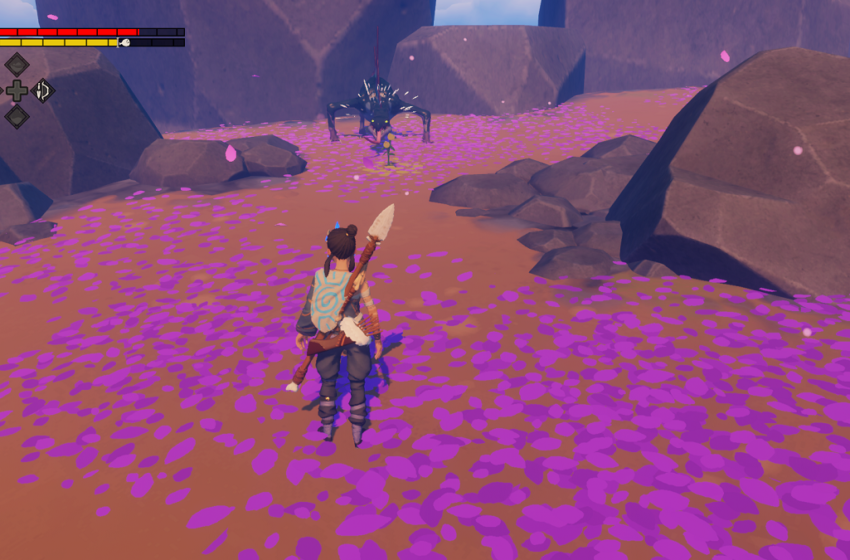 Gloomharrows are arguably the toughest enemies to defeat in Windbound. These purple, lizard-type foes can kill you on Survivalist difficulty, and they’re more than a match on Storyteller mode too if you’re cocky.

Having the right weapons and strategy will give you an advantage over any Gloomharrow you encounter. It should go without saying, but ensure you only tackle one Gloomharrow at a time. They sometimes come as a pair, and trying to kill two at once isn’t recommended.

First, make sure you have a sturdy spear, a bow, and some arrows. You might get away with having a leather sling and some oil or poison bombs, but a bow and arrow are quicker to aim and fire.

Draw your bow and fire off an arrow or two. This will take a couple of bars off their health meter before they realize that you’re attacking. Once they’re aware of your presence, swap your bow for your spear.

Gloomharrows are vicious at close-quarters. Get too close, and Gloomharrows will lunge at you to either take a bite or swipe you. Both attacks leave you vulnerable to further damage, so make sure you’re locked onto them and dodge when you see them about to strike.

If you dodge at the right time, they will be open to attack. Use your spear to stab them, twice if you’re quick, before they react. Most of the time, though, Gloomharrows will dissipate into a black smoke cloud after your first attack. Stay locked on even if they aren’t there as, more often than not, they’ll reappear in the same spot.

Sometimes, Gloomharrows will put some distance between you and them. They can reappear in the distance and, if they do, they will use their poison tongue to attack. If they catch you, they will knock you to the ground and poison you, which slowly depletes your health.

If they emerge at a distance, get ready to dodge. They might perform two attacks in quick succession, so always be prepared to dodge twice. Once they’ve finished, you can close the ground between you to try and stab them, or equip your bow and fire off a couple of arrows.

Repeat these steps to defeat them. If you’re struggling and are low on health, it’s okay to run away and eat food to replenish your health. Gloomharrows will lose interest in chasing you, and their health meter will still be depleted if you engage with them again once you’ve recovered.