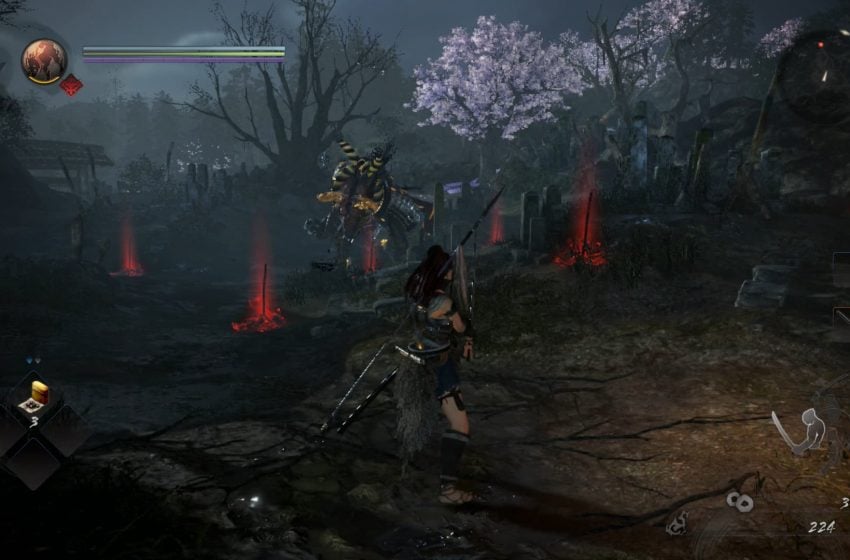 Gozuki is the first boss that you will run into in Nioh 2. He is very close to the start of the game and is actually more of a miniboss than a full-fledged boss. There are a couple of things you should understand before you fight him.

First, you don’t need to fight him. If you wish, you can run past Gozuki, ignoring him completely. Just wait until he is at the furthest point of his patrol area, then dash past him. This ignores the second, and most important part, of Gozuki, in that he is less of a boss and more of a tutorial.

While Gozuki is a tough fight at the start of the game, it is also a learning experience, and the main thing you should be learning in this fight is reading attack animations, correct dodge timing, and how to use your Burst Counter.

Like most monstrous bosses, Gozuki’s attacks have wide, swinging arcs, or are downward slams with large damage areas. You will need to carefully watch your stamina, taking advantage of your ability to regain it during fights and exercise a degree of caution. The majority of Gozuki’s attacks will take about half your health if he hits you, so you need to play a patient game.

Gozuki has a habit of chaining slam attacks together, and you should be aware that you cannot block the first attack. Instead, you need to dodge it, but wait until he is on the downward swing before dodging; otherwise, he can pivot the attack to follow you. Follow up slams can be blocked, but you will lose a huge amount of stamina from doing so. Focus on keeping distance, maintaining stamina, and dodging, then pick away at him when you get a chance. No visible health bar makes this an awkward fight, but be confident that as long as you are doing damage, and not taking any, you are winning.

Be careful of his rock throw attack, it doesn’t do too much damage, but he can follow it up with a vicious running slam that will do considerable damage. The key to the fight is countering his Burst with your own. Gozuki has a very forgiving Burst attack, and he will telegraph it by roaring. The whole point of this fight seems to be about teaching the player the importance of Burst Counters., so use them to your advantage and learn how to do them properly. The timing will be slightly different, depending on which Burst Counter you opted for during character creation.

Remember, there is a Shrine very close to you, so it doesn’t matter if you die, and this is a great fight to practice the game’s combat mechanics. While you can avoid it, we would suggest going toe-to-toe with Gozuki until you get the best of the massive demon.