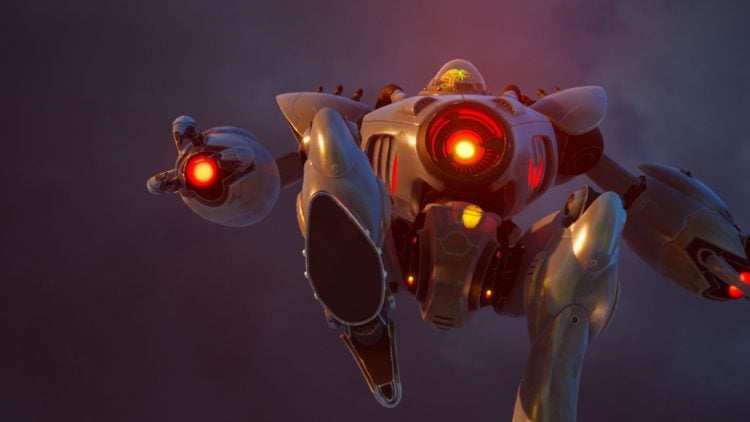 Destroy All Humans’ final campaign mission will pit you against two boss fights that are much more challenging than any other part of the game. The following guide will focus on the first boss, Roboprez.

Before we get into the fight, we recommend upgrading your saucer up as much as possible to make things exponentially easier. In particular, focus on the laser beam, your saucers’ health, and the reflecting power to send missiles flying back at who shot it. There is no checkpoint system here, so if you die during any of the three phases, you have to start from the very beginning.

Once you talk to Silhouette, she will bring in Roboprez. Immediately turn around and go to your saucer. Avoid the fire he shoots down at you and get in.

This first phase isn’t too difficult. The biggest threat will be the mine balloons he calls in. When you see him doing this, shoot those down first. The rest of his attacks in this area are easily dodged and rather weak. He may fire a flurry of shots in your area or start swiping a laser around your area. Just simply avoid these and maintain your laser fire in the middle of his chest. This is his weak spot, and hitting it at least once will get you the optional objective for this portion of the level.

If you do find yourself running low on health, there are vehicles to the right if Roboprez you can zap energy from, or one of the giant mechs (that now seem tiny) will be firing at you. Whenever you see these guys, we recommend zapping their power and not instantly destroying them. They can give a rather large sum of health before they are destroyed, and their fire will not harm you too much.

When you lower Roboprez’s health, he will fall to his knees momentarily. Save your ammo, he cannot take damage during this time. The moment he gets back up and starts running, you can start harming him again. As you go forward, there is sonic boom ammo scattered along the path if you prefer to use that while he’s running. He will stop right before the bridge. Before you start hitting him again, destroy the nearby SAM turrets and any mine balloons he calls in again.

This is where things start getting tougher. Hopefully, you upgraded your reflective blasts to at least activate faster. When Roboprez holds up his arms, he will start firing tracking missiles at you. He will also continually do this if you get too far away in search of health or anything like that. If you fully upgraded the reflect power, it will send them back at him doing a little damage while you get yourself ready. Be sure to continue destroying mine balloons as they are called up and dodging his other fire as much as possible while hitting him in the chest with your laser.

If you get low on health, every now and then, a mech will come into the picture to take some health from, but it was very inconsistent for us. There are vehicles on the bridge you can zap from, but like the cars earlier, they will not give much health. Continue the above procedure until Roboprez goes down on his knee again.

Once Roboprez gets up, he will turn around and start running across the bridge and stop in front of the Pentagon. Again, there will be sonic boom ammo if you want to fire some at him. Be sure to take out SAM turrets and mine balloons surrounding Roboprez again. In this area, he will let out the most fire and call in the most balloons. If you do not watch your health, it will quickly go down. The good news is, not much needs to change in the form of strategy. Unfortunately, there are not many chances to regain health here, so dodging fire becomes even more important. His attacks will now reach much farther, and his laser beam can be particularly tricky to dodge with how large the blast becomes.

Stick with the plan of firing your laser beam into his chest while dodging everything else and you will eventually knock Roboprez down for the final time and set yourself up for the final boss of the game.