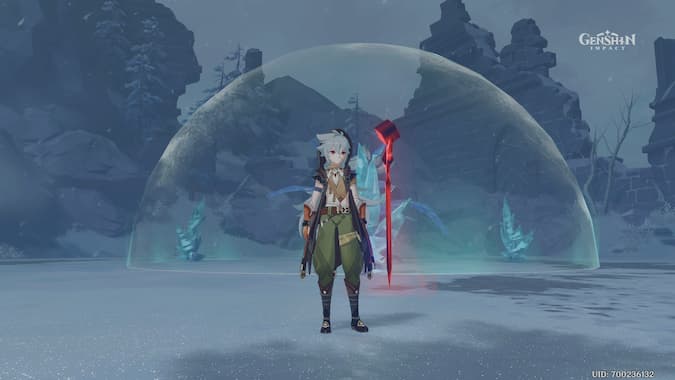 The Resurgent Cryo Regisvine is the final fight for Act 4 of the Chalk Prince and the Dragon event in Genshin Impact. This is a reworked version of the Cryo Regisvine fight, as a plant in Dragonspine has been brought back to the life by the power of the dragon within the Festering Sword.

It is an awkward fight for a couple of reasons, but in this guide we will walk you through it. The first thing you should know is that you can play this in singleplayer or co-op mode. We would advise co-op mode if the matchmaking will work for you. At higher world levels the game seems to have quite a few issues getting matches, however. To start the fight, just interact with the red shrine in front of the plant, then choose your preferred way to fight it, either on your own or with a party.

To start the fight you need to break the three small pillars of Peculiar Ice around the main shield. To do this, kill the slimes and pick up the Scarlet Quartz that they drop, then hit the pillars. When all three are gone, you can start working on the Resurgent Cryo Regisvines health.

It goes without saying that Pyro characters like Diluc, Klee, Amber, Bennet, and Xingling are all a good idea here. You will also want a solid healer in your party, because this fight can get a little rough.

You will need to watch out for all the standard Cryo Regisvine attacks, and a special attack that this Resurgent version can do. It will basically turn all the air in the arena bitter cold, and it will kill you in a couple of ticks. To counter this, keep an eye out for blue waypoints that will appear on the screen. These will mark small crystals you can smash that will then form dome shields that protect you from the cold. These Seeds of Winter will break after just a few attacks, so you can cut it pretty close. Don’t worry if it seems like the boss is spamming this attack, as it has limited energy it can use before it needs to recharge.

Just like the normal fight, you want to focus the crystals at the foot of the plant, or at the head. This will stun it and give you good windows to damage the boss. Try not to start these windows when the enemies frost effect is on the ground, or you will just be trying to trade healthbars with it, which is a bad idea.

During the fight, make sure you keep an eye on your levels of Sheer Cold, and use the braziers along the outside of the arena to reduce it. Mostly, for many players this fight will boil down to patience. Just wait till you get your chance to damage the Crystals that form on the plant to stun it, then go through its health bar as quickly as possible.