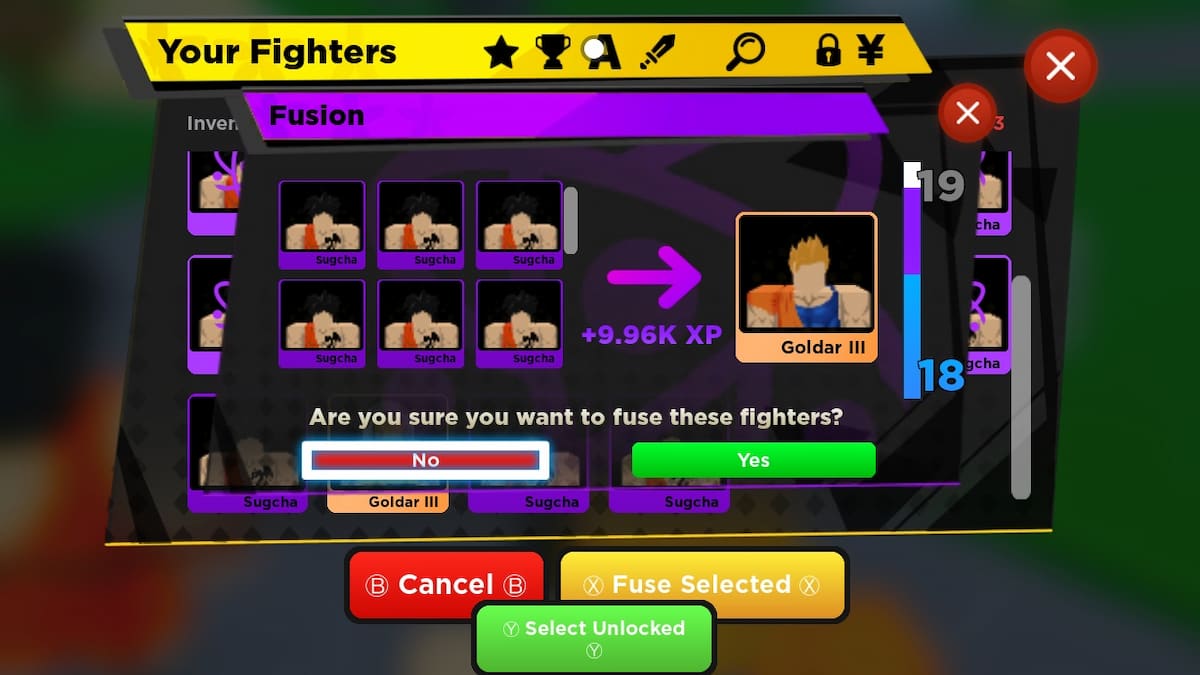 Like any other monster-collecting game, Roblox’s Anime Fighters Simulator puts a heavy emphasis on pushing you to level up your characters. For one, it is the single most important thing to do before traveling to new unlocked worlds as the general level of enemies spikes greatly between each one. However, it also proves crucial in beating high HP bosses in just a matter of seconds. So, if you’re seeking to build one of the best armies in the game, here are the best ways to develop your fighters.

Most of the community knows that buying from any given star shop will almost always result in you receiving a Common Pity — which ultimately goes unused in your inventory for days on end. Instead, we recommend fusing, also known as sacrificing, those Commons to your stronger fighters for them to gain a massive collection of XP. Be wary that low-level characters being fused won’t grant your main fighters an awful lot of XP. Thus, you’re better off buying from star shops found deeper in the game so that your odds of pulling a level 30 or higher Common is all but guaranteed.

One terrible trap most players fall into is fusing low-level characters of a Legendary or Mythical rarity. Although the XP given can potentially be in the thousands, the fuse system mainly takes into account the sacrificed fighter’s level and not its rarity.

As fusing Pity is the key tactic to leveling up the fastest, you’ll save hours of your time by upgrading your character inventory. You can claim a larger inventory by completing certain challenges found in the Upgrades menu on the right side of the screen. Once upgraded, you can fuse hundreds of your unwanted fighters at a time and auto-buy fighters at a faster rate without the game instructing you to empty your collection every few minutes.

The most beneficial way of leveling up is unfortunately one of the toughest — at least for beginner players. In the Time Trials hub, there is a shopkeeper offering a permanent XP Boost for the heartbreaking cost of 50 Shards. These Shards can be discovered every ten rooms or so in the Time Trials and even making it to Room 10 can be a difficult task. So, this may be a method best suited for those with teams of fighters at least at level 50. Once obtained, the boost will then nearly double the amount of XP granted to fighters after each fuse.