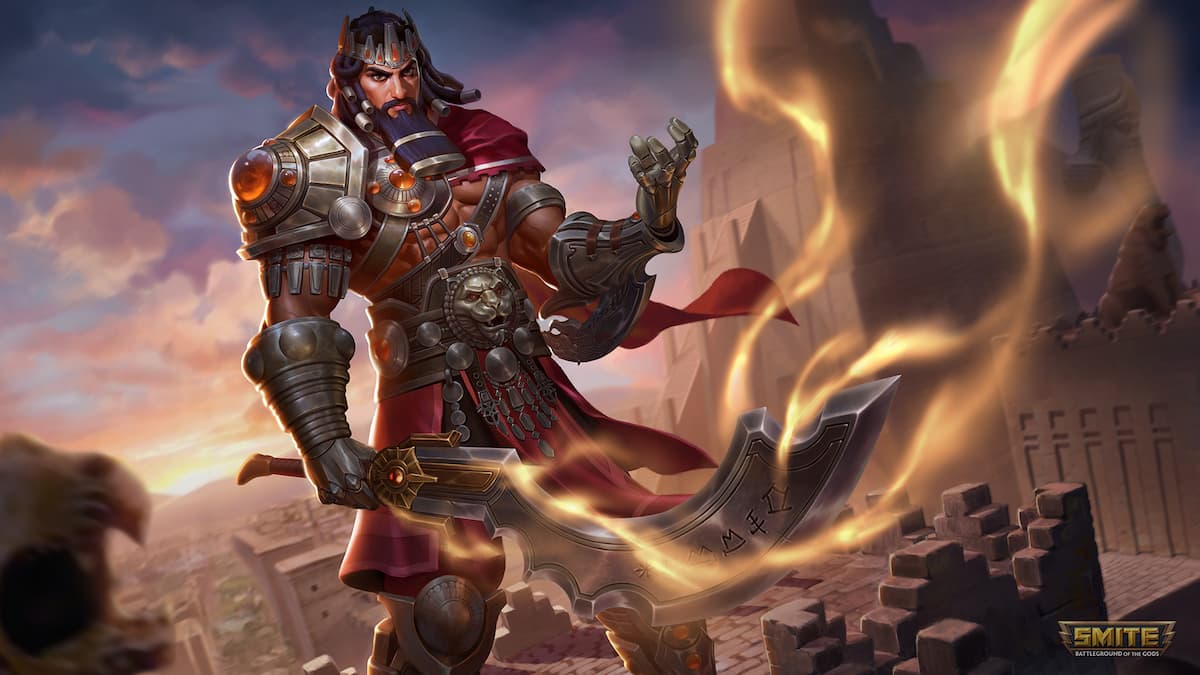 Gilgamesh is a Warrior in Smite. He’s a physical melee god, and you can expect to see him being used by several players following his initial release. Then he’ll enter the general rotations like every other god before him. With his release, players are keen to figure out how to get the most out of his god early. For those playing on conquest maps, how should you play Gilgamesh, and how should you be leveling his abilities?

What role should Gilgamesh play?

The two biggest roles that Gilgamesh will fill in Smite will be jungle and solo. For most players learning how they like to play this character, you’ll want to start with the solo lane to figure out his kit and how you can use his abilities alongside items. After that, adventuring into the jungle will be your next step to figure him out. Gilgamesh has some pretty solid abilities, but they can feel a little awkward.

He wants to be a basic attack warrior, with his first ability giving him a buff. His second ability, his Drop Kick, serves as his lane clear, which is a good way to keep the lane and jungle in check. His third ability can be useful. However, it only buffs movement speed and gives all allies lifesteal but doesn’t lower an enemy’s attack speed. It also doesn’t lower the protections of any enemies. Because his third ability only increases movement speed, provides no other buffs, it makes him a poor choice for the support role.

How to level Gilgamesh’s abilities

The best format to level up Gilgamesh’s abilities depends on how you want to play this god. For most players, you’re going to want to go down the route of turning him into an attack speed heavy god, so he’ll be able to get the most out of his first ability, and his defenses will turn him into a heavy bruiser, augmenting his other third ability, and his maximum health increases his first ability’s bonus damage. When you’re leaning into the attack speed build for Gilgamesh, you want to go with Sun-forged Scimitar, Drop Kick, and then Hero’s Advance. You want to level up his ultimate, Winds of Shamash, whenever you can.

When you want to focus on making his abilities stronger, and you want a stronger lane clear, you want to level up Drop Kick first, followed by Sun-forged Scimitar, and then Hero’s Advance. In most cases, Hero’s Advance will be the last ability you level up because, other than movement speed, it doesn’t do much else. You primarily want to focus on his Drop Kick or Sun-forged Scimitar and get those completely leveled up as quickly as possible.

How to build Gilgamesh

We’ve broken down the best build for Gilgamesh in another article. Gilgamesh will benefit the most by having some form of lifesteal in his equipment, and you want to lean into his attack speed if you’re playing Gilgamesh in the jungle or solo lane role.

There’s a middle ground of trying to find the best items to boost Gilgamesh’s attack speed, giving him a decent amount of physical and magical protection, and some form of lifesteal to keep him in the fight. Souleater will be an excellent item for lifesteal, and The Crusher is a superb item to boost Gilgamesh’s attack speed and enhance his abilities.