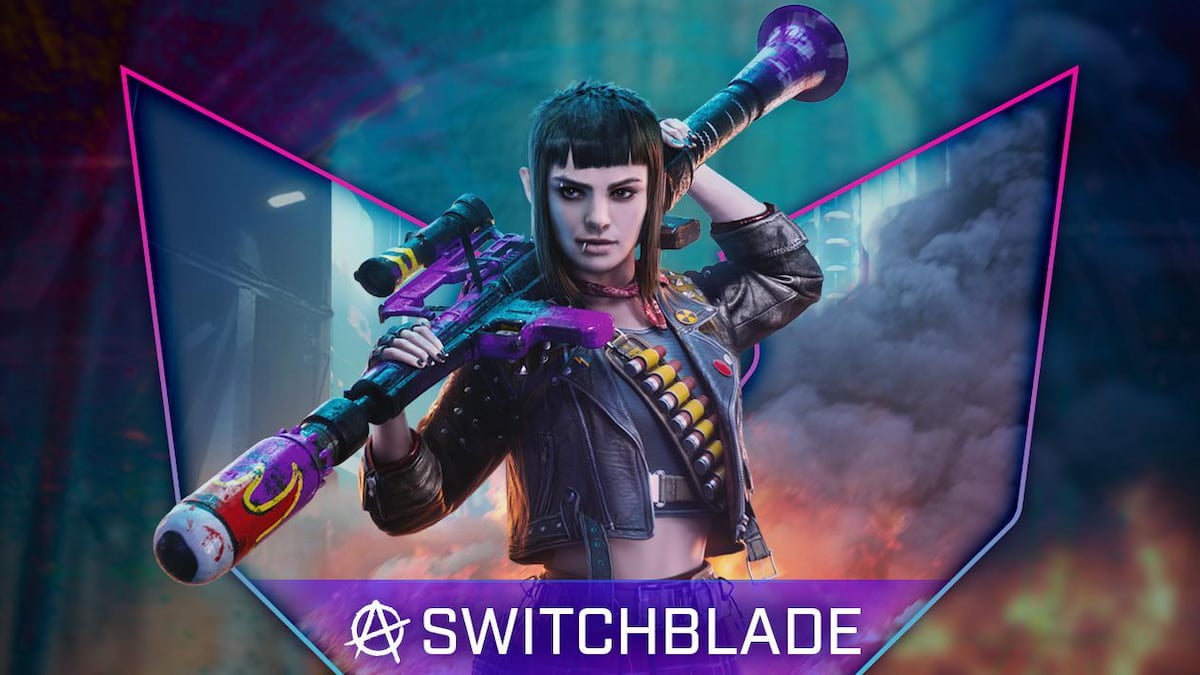 The new Rogue Company breacher Switchblade is more of a Swiss army knife. Unlike some other Rogue Company operators, Switchblade is anything but a one-trick pony, and she can be played effectively in several different ways depending on your playstyle and your team’s needs. Switchblade is not good at is playing passively — she is not a defensive character and should not be played as such. This guide will walk you through everything you need to know about playing Switchblade in Rogue Company.

Rogue Company players should appreciate that Switchblade has a very eclectic selection of items, weapons, and perks at her disposal. She can take Flashbangs, and the entertaining but dicey Bounce Grenade. Her sidearm is the Spitfire micro SMG, and her dedicated melee weapon is the Baseball Bat, which goes well with her Harley Quinn inspired aesthetic.

Switchblade’s primary weapon can be either the MLX Mark 4, a scoped assault rifle that works well at all ranges, or the 24S SMG, which had previously been exclusive to Lancer. Both weapons are great, and both support distinct playstyles. If you like getting close to the enemy — which is in line with Switchblade’s role as a breacher — you should take the 24S; it’s a strong weapon at base, so don’t upgrade it, and instead spend your money on throwables and perks. Conversely, the MLX Mark 4 benefits a lot from upgrades, and you get to hang back more when using it, so don’t hesitate to spend money on it. That said, if your team has at least one long-range operator, you should just go with the 24S, as every other part of Switchblade’s kit already enables a mobile, close-quarters approach.

Switchblade also has a flexible selection of perks at her disposal, including multiple defensive perks to enable a more reckless playstyle.

Switchblade’s passive ability in Rogue Company is Fight and Flight: she gains a burst of movement speed when using abilities or gadgets. Since she can have up to three throwables (not counting gadgets she picks up from the ground,) Switchblade should have no trouble getting around the Rogue Company maps quickly.

Her active ability is the Chaos Launcher: a single-use weapon that fires an explosive projectile. After detonating, the projectile covers a sizable area in burning liquid, which stays on the ground for a while, dealing roughly four times as much damage per tic as a regular Incendiary Grenade. The burning pools are deployed in a line parallel to the direction Switchblade is facing when she shoots; they extend over and through cover. This means that if the initial projectile hits a piece of cover, the fire will almost certainly start burning players hiding behind it.

Chaos Launcher is a devastating ability that can flush enemies from cover and keep them out, or outright down them and then kill them in a single cast. Note that Scorch is immune to the damage-over-time effect of Chaos Launcher, but not the initial blast. Nobody is completely safe from Switchblade.

On release, Switchblade is a straight upgrade to Dima, in that she does everything Dima does in Rogue Company, and she does it slightly better. The Chaos Launcher is a strictly better MIRV launcher, and Switchblade’s mobility is more helpful than Dima’s Burned passive ability. As if to reinforce this imbalance, developer Hi-Rez Studios actually replaced Dima’s Nimble Hands perk with Stalker, which is not the most helpful change. Dima might catch up in future patches, but regardless of what happens to him, our first advice to Switchblade players would be to brace for nerfs, and not get attached to any part of her current kit. She is noticeably over-tuned on release, and will likely be changed.

With her Fight and Flight passive and the Berserker perk (which is cheap and should be purchased in every match), Switchblade is a very mobile Rogue who should always be looking for unexpected angles to engage from. There is rarely a reason to attack an opponent who can clearly see you coming. While the Chaos Launcher does work well as a zoning tool, you should always aim to land direct hits on unsuspecting opponents with it to capitalize on its upfront damage and lack of detonation fuse. Switchblade has access to a speed buff for a reason, so make sure to use it and flank often.

As strong as Chaos Launcher is, Switchblade players should be aware that Active Protection Systems neutralize it completely. With the growing popularity of Rogues like Mack and the recently buffed Trench, Active Protection Systems are becoming a more common sight in Rogue Company. To ensure your Chaos Launcher projectile actually hits home, make sure to identify and destroy any deployed APS units on the field first, or simply find a target to shoot at that isn’t within the effect radius of an APS. With Switchblade’s high mobility, this shouldn’t be too difficult.

In terms of loadout choices, there is no way to go wrong, as everything Switchblade has access to is useful. She is one of the very few Rogue Company operators who can take the Replenish and Life Drain combo, and if you favor using the 24S and playing very aggressively, getting both of those perks is a must. Additionally, you should buy both of your throwables early, so you can benefit from the speed buff more frequently. With a base Bounce Grenade and a fully upgraded Flashbang, Switchblade can get up to four instances of the Fight and Flight speed buff per round, which is more than enough to run circles around the enemy team.

Finally, we strongly recommend buying the Tenacity perk even if the enemy team doesn’t have too many Rogues with explosives. This is a precaution against your own abilities and throwables, especially the Bounce Grenade, which can be treacherous.