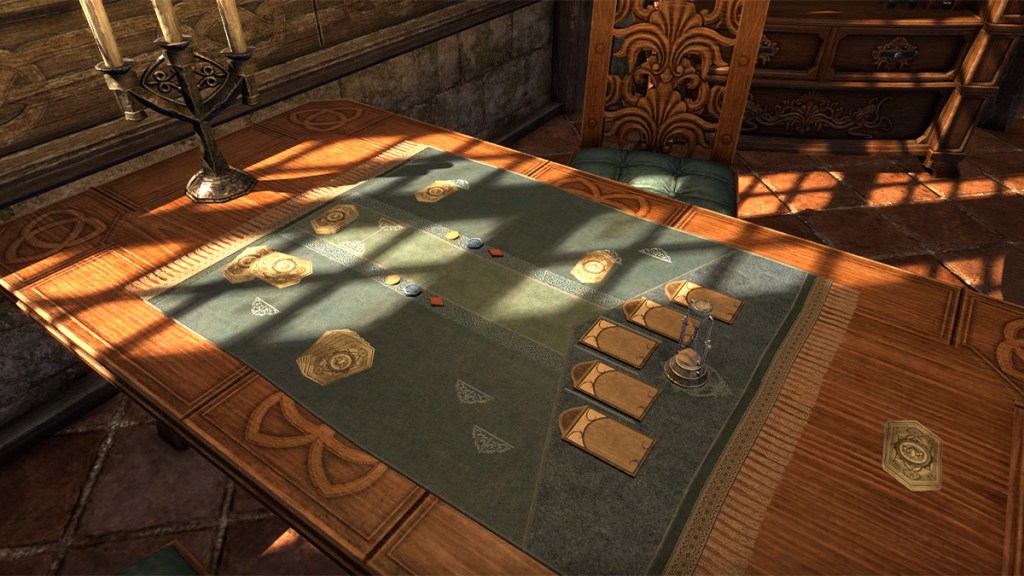 Tales of Tribute card game breaks the rules of typical card games. Players construct their deck during the game and collect resources to purchase better cards. If you like the sound of this, then you’re probably itching to play Tales of Tribute. The card game was released with High Isle, the latest Elder Scrolls Online expansion. Finding where to play the game, however, isn’t easy. It’s not just about walking into a Tavern and starting a game; neither can you challenge another player right away.

How to unlock Tales of Tribute

Where to find the tutorial quest

Head towards the building, but don’t go inside.

Outside Gonfalon Bay, in front of the main entrance, there is a water feature. There, you’ll find Brahgas with a quest marker above his head.

Speak to him to activate the quest. Lord of the Rings fans should instantly recognize this voice as Billy Boyd, the actor who played Pippin in the Peter Jackson film trilogy. Brahgas will tell you all about Tribute and that you need to “learn the rules of the game” before you can play.

Brahgas will also tell you to “speak with Razhamad at the Gonfalon Gaming Hall.” Accept the quest by clicking “Goodbye.” You should see the map marker updated and will be on your left. This is the gaming hall. Head in this direction and go inside.

Go through the first room and find Razhamad in the door on the left.

Turn around and find Brahgas sitting at the table on the right as you came in. If you look closely, you’ll notice he has Tales of Tribute cards on the table. Speak to him and tell him you are “ready to play.” He’ll give you two decks to borrow and tell you how to win. Start the tutorial game by clicking “Let’s play.”

Your screen will open to the Tales of Tribute card game. Follow the prompts and explanations of Braghas. This first game is straightforward, and you’ll only be able to perform certain moves, and Braghas directs you. We’ll explain in depth later some of these rules and mechanics.

To advance the quest, you’ll need to win. As Brahgas explains, the rules for this game are much simpler than normal Tales of Tribute card games. In this tutorial, you only need to reach 10 Prestige points, not 40. After you complete the game, you’ll be sent some match rewards.

Now that you have bested Brahgas, return to Master Razhamad in the previous room. Tell him you won and that you want to play more games. He’ll explain that you can become a member of the “Gonfalon Chapter of the Roister’s Club.” He’ll tell you about the rewards associated with Tribute, and you’ll gain some points and gold for completing the quest.

You have completed the first Tales of Tribute quest and unlocked the “Part of the Club” and “Roister’s Club Initiate” achievements. Tell Master Razhamad you want to increase your skill, and he’ll tell you to practice, beginning the next phase of the quest.

Turn around and to the right, where you’ll see a set of stairs. Head up the stairs, where you’ll find Sorinne. Challenge her to a game where you’ll learn a few more tricks. This is a more typical Tales of Tribute match, where you’ll need to gain 40+ Prestige points or have favor from all Patrons to win.

Once you have defeated Sorinne, you’ll receive some points and rewards. She’ll then tell you to speak to Kishka, the Broker. Find Kishka downstairs next to Master Razhamad. She’ll tell you about daily challenges.

Now head outside and around the building to the left, where you’ll find Brahgas again. Speak to him where you’ll learn a little more about decks, cards, and prizes. Finish speaking to him and return once again to Master Razhamad. Speak to him to complete the quest and earn a special Tales of Tribute Banner, points, gold, and achievements.

Now you’re all set to play Tales of Tribute.

Compete in Tales of Tribute games

Now that you have completed the Tales of Tribute quests, you’ll be able to play Tribute all around the world. Challenge other players, play in Taverns, complete daily quests, and be on the lookout for tournaments.