League’s newest champion is about to burst onto the scene – how will this AD-bruiser likely turned melee assassin wreak havoc in the solo lane? In this guide, we’ll teach all you need to know about Sett – ability information, builds, and maybe even a couple of crucial combos you can take to the Rift so that you’re fully prepared for when the king of the fighting pits makes an appearance.

In terms of Runes, we’re looking at Grasp of the Undying. This will help you trade and sustain versus some of the toplaners with in-built sustain and is rather easy to proc with the additional movement speed granted with your Q. Time Warp Tonic is always beneficial for champions that utilise all-in burst trades to sustain through the lane, so opt for this to make your trades even punchier (get it?).

Item-wise, you may be tempted to rush out a Tiamat for some additional waveclear – but if you max your W – Haymaker, you will find an abundance of waveclear already built into Sett’s kit. You will want to rush out a Black Cleaver – similar to Gnar, Aatrox, or a more utility-focused Riven – and then opt for Death’s Dance into the full tank, again very similar to Gnar or Aatrox builds. More offensive utility itemisation options include Guardian Angel or Sterak’s Gage. 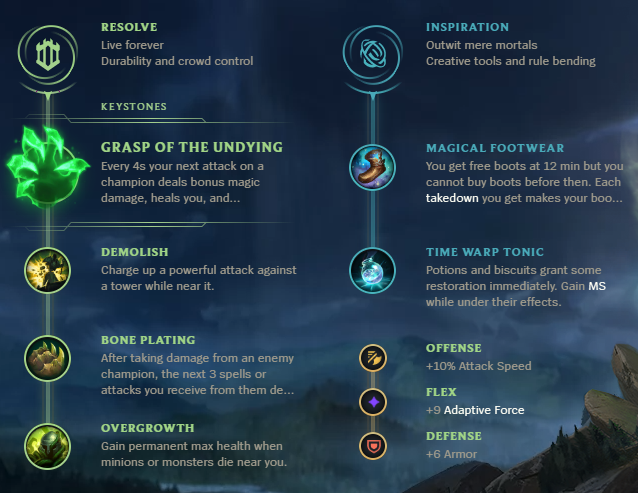 As aforementioned, W max seems to be the way to go. The reliable waveclear and trade potential – with no regard for mana costs since Sett is essentially resourceless – cannot be ignored. Sett’s passive is that his auto attacks are spread between his two fists, meaning that every other auto attack has increased damage and slightly more range, as well as a little bit of additional health regeneration.

His Q – Knuckle Down – is somewhat useful for closing distances, though the movespeed is negligible compared to the additional burst of damage. The fact it applies on two hits – i.e. both punches of his passive – is a further bonus. Sett’s W – Haymaker is both useful for trading and waveclear as well as all-ins thanks to the shield it grants. His E – Facebreaker is a hook on either side, pulling enemies towards this juggernaut and stunning them if they are hit with both parts in the middle.

Sett’s ultimate is a suppression similar to Malzahar, Warwick, and Vi – a 1.5-second complete lockout that could very well force the enemy to purchase a Quicksilver Sash.

Sett’s level 6 all-in is pretty insane, especially if you can weave auto attacks in between every skill similarly to Riven. Open with E and follow with two auto attacks, into Q, two autos, W R auto auto. Once a champion is hit by your slow or suppress they are pretty much guaranteed to eat the rest of your combo – but make no mistake, Sett is a juggernaut type of bruiser. As such, don’t expect insane damage from your full ability rotation, rather use it to finish off a 50-60% HP target like you would with Garen, Darius, and the like.