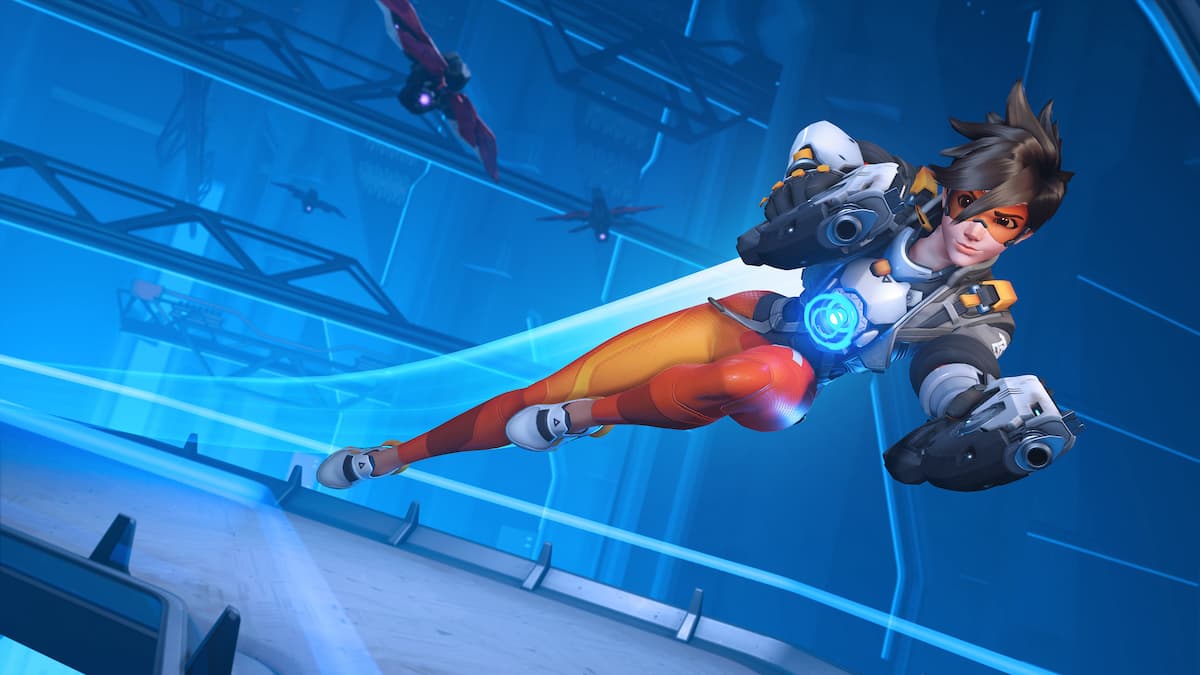 While Overwatch does not necessarily have just one main character, Tracer is definitely the poster child. She is almost always front and center in any marketing, and she was the chosen representation to appear in Ready Player One. Even with so many other playable characters, Tracer remains one of the most popular with her fast-paced gameplay and cheery attitude. Here is a breakdown of how to play her in Overwatch 2.

Tracer’s primary fire is her two Pulse Pistols. They provide fully automatic fire that is effective in the short-range because of their spread. They reload and shoot very fast.

How to play Tracer

Tracer is built on speed. Because her health pool starts at a lowly 150, you want to use her Blink and Recall to get yourself out of danger while also punishing enemies that haven’t stuck with their team. When not avoiding fire, use Blink to get yourself into the enemy team’s backline and attack their Support or any Damage characters off on their own.

The biggest challenge with Tracer is keeping your fire on enemies while you are dodging and weaving around them. You want to put as much fire as possible into headshots to quickly take them down before they have a chance to retort. The longer an engagement goes that you and an enemy are both alive, the more danger you are in as you begin to lose access to your Blinks and Recall.

The most effective way to use Tracer is in a dive comp. If a teammate is helping her attack the backline or takes the pressure off of her, then things are much easier for her to execute her plan of attack on the enemy. The numbers game is very important. If Tracer is outnumbered, the odds are stacked against her. Having a friend at your side will put you in favor, though.

Good teammates to play with Tracer

As mentioned above, dive heroes work brilliantly with Tracer. Her best friend from the Damage class will be Genji, as they are both fast and can be hard to hit. If you coordinate your attacks, you can quickly take down any enemy.

Tanks that run best with Tracer are Winston, D.Va, Wrecking Ball, and Orisa. These characters can take the pressure off her by jumping into fights and demanding the enemy team’s attention. Support characters that work best with her are Lucio, who can amplify her speed, and Zenyatta, who can keep a Healing Orb on her and make it easier to pick off enemies with his Orb of Discord.

All counters and who to counter with Tracer

With their easy stuns being taken out of the game, Cassidy and Briggite are not nearly as powerful of counters against Tracer now. Additionally, Sombra’s Hack only taking her abilities away for one second is now a massive boon. While these characters can’t significantly slow her down, they can very quickly eliminate Tracer by hitting her. Pretty much any enemy that hits headshots on you can wipe you from the field if they are accurate. If Roadhog hooks you, you may as well get ready to respawn. Torbjorn and Symmetra’s turrets are also significant problems if they are shooting you.

The best characters that Tracer counters are anyone who is slow-moving with big hit-boxes. Zenyatta, Torbjorn, Cassidy, Orisa, Reinhardt, Ana, Ashe, Bastion, and Widowmaker stand out as characters Tracer can easily put a lot of damage into if she sneaks upon them. Some heroes may try and escape, but Tracer can keep up with them. Wrecking Ball, Soldier: 76, Sojourn, and Mercy have abilities that may make them think they got away to safety, but you can stay on their tail.