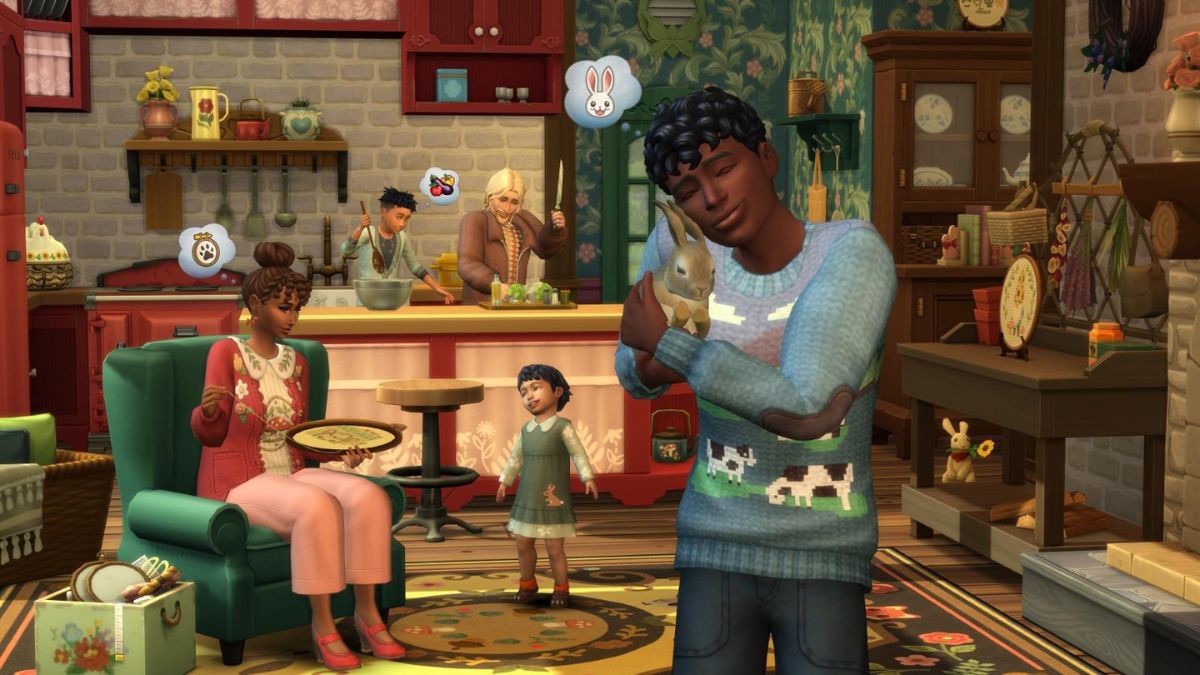 The Sims 4 has grown bigger and better since its 2014 release date. While the game started with three simple worlds, players now have over twenty worlds available (as long as they pay for game packs, that is). Each of these worlds comes with different lots, shops, activities, and benefits.

Some are simply just better than others. If you want to know which worlds are better buys, here’s a ranking of all 22 worlds currently in The Sims 4.

Related: The best custom content mods for The Sims 4

Get to Work Pack

Seen as the worst world by The Sims 4 community, Magnolia Promenade is one of the blandest worlds available. It comes with just four lots, and three of those are taken up by pre-built retail shops. You also can’t build a residential home here, so it can make it annoying to constantly have to travel from your home to your business (especially when you’re just starting out). Most Simmers just don’t even bother with these businesses and this world at all anymore.

As pretty as Batuu is, it’s famously disliked by Simmers. It has an interesting enough story and cool alien additions, but Sims players aren’t typically interested in leaving the world of The Sims 4 for a completely different franchise.

For Star Wars lovers, Batuu was probably a fun, thrilling thing to happen to The Sims 4. For everyone else, though, it was a world that they either ignored after their first playthrough or didn’t buy at all.

This is a bizarre world, and that’s the point. We know that this world is meant to be a unique experience, but beyond the story mode, there isn’t a ton it has to offer.

The world comes with 12 lots, including a library, bar, secret lab, and more. It has a beautiful view of the desert, which is really nice to look at, and the mystery of the story is really great when you first play.

The issue is that you have to complete the story to toggle it off, and the strange behavior of the inhabitants just stands out weirdly from the rest of the game. The story is just too integrated into the world and it kind of ruins the entire experience.

Granite Falls was the game’s first vacation world, and it definitely shows. Vacationing is fun and players love having it in the game, but this world definitely has rough draft energy. When the weird man in a bear costume is half the fun, that’s a problem.

A small national park featuring only five lots, it can be amusing for Simmers who love to take their Sims camping. But it just doesn’t have enough to put it above many of the other worlds. There are also an overblown amount of trees always blocking your view, leading to some frustrating moments keeping track of your Sims.

We are torn on this one because we really love the spooky, gothic vibe of this world. Just the overall feel of Forgotten Hollow is really cool and there’s nothing else quite like it.

That said, it’s just so small and doesn’t bring enough unique features to put it higher on this list. There are only five lots available on this one, and the community lots don’t fit too well into the layout. The garden in the center is a nice touch but there just isn’t enough to do.

This World can be seen as a builder’s dream thanks to its 15 empty lots. It offers a blank canvas for a person’s creativity, but that isn’t always going to work for some people. Builder-type Simmers will love it, but people who prefer to play with their Sims might feel trapped by the bare neighborhoods.

It just suffers from the blandness that plagued a lot of the base game.

This World appears bland on the surface with its five lots and its famously bare builds (including the infamous staircase to nowhere). However, this realm does come with one major perk: the fantastical magic. From the Spellcasting Sims to the world itself with its giant moon and portals, it can be a lot of fun for occult Simmers.

Glimmerbrook has a few great architectural details and views, but don’t expect the world to wow you too much.

We really love the look of Selvadorada; its surroundings look stunning, and it features amazing temples ready to be explored. The bar, national park, and museum are all culturally intriguing and lively.

The issue is that it’s still pretty small with only seven lots and you can’t live here. It is permanently a vacation world, only. Moreover, the hazards in the jungle can be problematic. On the easier end, you could get a few uncomfortable bee stings. In the worst-case scenario, though, the same insects, snakes, or poison darts could be deadly. If you want a laid-back gaming experience, visits to Selvadorada might not be the best option.

Featuring 21 lots, this is one of the biggest worlds in the game. It comes with many pre-built houses, museums, libraries, a nightclub, a gym, and a park. It’s a wonderfully friendly and lively environment.

It is from the base game, and because of that, it doesn’t have a ton of “flair” to it. It’s really solid for beginners, but it just doesn’t have anything that gives it that edge to it. Also, Eliza Pancakes could be your neighbor, and no one deserves that.

This World comes with a lot of flexibility and things to do, and three areas comprise this location: Foxbury, Britchester, and the town. Each campus comes with two dorms, one student house, and a common area, while the town has three houses, a bar, and a library.

Unfortunately, there is still a lot that is just background decoration, and that is a big bummer. The townhouses look pretty weird when you put them by themselves in a big lot and the community areas can feel uncomfortably empty.

What does Tartosa have going for it? A lot, visually speaking. It has gorgeous wedding venues, small honeymoon places, wedding shops, and a stunning bay. It’s not a huge world (No game pack worlds are), but it does its job as a nuptial paradise. The downside? Ever since its release, My Wedding Stories as a pack has been painfully buggy with few fixes from EA. So, beware, you won’t actually be able to enjoy all the wedding splendor advertised.

This one is ranked above Willow Creek because of its desert aesthetic, which just brings a special feel to it. While it only has three vacant lots, there are still plenty of things you can do since it features a museum, lounge, gym, bar, and park.

Unfortunately, some of the community feel out of place, and many builds can feel a little vacant and lifeless. It’s a common flaw of early base-game homes.

Of all the occult packs, Werewolves has the absolute best world. Moonwood Mill is interactive and has interesting lore, but without overshadowing the general wolfish charm of the space. It’s full of life, story, and nifty forest vibes. This world is still going to be a lot more immersive and fun if you like occult gameplay, but it maintains a grungy aesthetic that even normal Sims players can enjoy.

This L.A./Hollywood setting really stands out to us, and it compliments the pack it comes in very nicely. It feels like you are living in a city full of superstars with three mansions, three smaller houses in a cluster, and the downtown area that has a VIP lounge, regular lounge, museum, park, and gym.

The details that bring this entire atmosphere together make it a fascinating stand-out (if only its lighting was better).

Family-focused Simmers have always been desperate for more things for the kids to do, so Copperdale was a dream come true. It only has a dozen lots, but it includes a customizable high school campus and two different family-friendly neighborhoods. You can also take your Sims to the wharf for dates or family outings where you enjoy Ferris Wheels and boba. Some of its charms fall flat if you don’t love playing teens, though.

San Myshuno is truly a unique experience in The Sims 4. It features festivals, collectibles, and a large collection of apartments. Add this to a collection of nightspots and cool places to visit, and the gameplay adds a lot of fun for players who like to get their Sims out and about.

This city world includes a ton of cool build options available and plenty for your Sims to do. Whether you prefer the Romance Festival or Geek-Con, it is jam-packed with content.

This 16-lot coastal town has plenty of great views to offer you. Everything is spread out enough that it feels like a much more open world than others. It has a nice, peaceful feeling to it, especially thanks to the rain that comes often.

It could probably stand to have some more lots available in it, but that limited availability is well worth paying for what it brings to the table.

This island location is breathtaking and features its very own culture, events, and way of doing things. It is arguably the prettiest location in the game, especially for people who love beaches. If you explore and forage throughout the world, you will get great rewards as everything blooms and grows into something special.

However, the lots it comes with are pretty small, and if you don’t want to build out over the water, that can feel rather restricting.

Coming in with a huge number of lots (27), Windenburg is a massive coastal town to explore. It comes with both countryside and city locations, and plenty of community lots. That includes two bars, two cafés, a pool, a gym, a nightclub, and a park, all you can explore and enjoy.

Be sure to check out the Von Haunt Estate, the Ancient Ruins, and The Bluffs, where events will take place in this World. For example, The Bluffs has some pretty wicked dance parties.

This The Sims 4 world is an easy top favorite. It has beautiful views and an ever-changing world state, depending on how you take care of the environment. There are three neighborhoods that you can individually design and it blends old style and contemporary styles perfectly. Whether your Sims live by other families or by the docks, Evergreen Harbor is a wonderfully sustainable (or industrious) place.

There’s a certain coziness to Sims fans, so it’s no surprise a place like Henford-on-Bagley has been a huge hit. It’s a homey, England-inspired little town where you can either grow farms in the hills or enjoy the quaint village life downtown. From the farmer’s market to the fair, there’s a lot of charm to this fresh and new Sims world. Also, the ducks. Everyone loves the ducks.

2020 knocked it out of the park for The Sims 4 game worlds. First came the dynamic Eco Lifestyle, which has been a beloved favorite of builders and crafty sims ever since. However, arguably the best world in The Sims 4 history came later in that year: Snowy Escape. A dynamic world rich with culture, festivals, spas, vacation spots, winter sports, and YouTuber-made builds, Snowy Escape has a bit of everything. It’s beautiful and versatile, so if you can only buy one world-pack right now, this would be the one. Now go enjoy your hot springs, koi ponds, and mountain climbing in the unforgettably beautiful world of Mt. Komorebi.