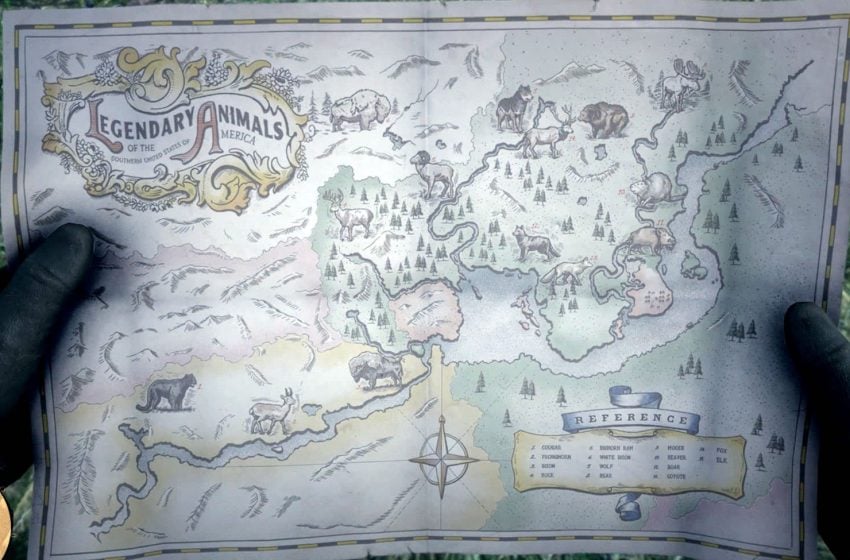 Red Dead Redemption 2’s open world shines as bright as its story. Dozens of small side quests bring life to the game. Hunting the Legendary Animals is a series of several such side quests. It’s entirely optional but an enjoyable, rewarding aspect to the game.

Unlike the regular animals, like grizzly bears, cougars, bucks, or moose that wander the map, the Legendary Animals don’t go down easily, and the ones that fight back will put up quite the fight. Best to come prepared.

There are 16 Legendary Animals (not including the Legendary Fish), and finding them is a task in itself. The game gives you a special map, but frankly, it’s hard to read in places. Here, we have a list of all locations, and the in game map will be marked with an indicator when zoomed in enough. But just finding the location isn’t enough. The animal will not spawn until the player begins tracking it.

Hunting any of the Legendary Animals can be quite a task. Unlike following the usual white-tailed buck through the forest, hunting the Legendary Animals will spawn different indicators and tracks for players to follow. Players will run into golden markers, such as bones, feces, or other indicators. These will glow yellow while in Eagle Eye, so they’re easy to spot. For those familiar with Red Dead Online, it’s the same mechanic as following clues to a bounty target.

First, upon entering the general location, the game will notify players that they have entered Legendary Animal territory. If you do not get this notification, leave the area, pass a few days at camp, and return. Once that notification pops up, finding the first clue will start the process, but the animal may not spawn until a couple more clues in. Arthur will have some auditory cues that will indicate when the creature has and has not spawned. Upon finding the first clue, he will reference that the trail is cold and it’s been gone a while. Keep tracking until he says some variation of, “Okay, where are you?” in his typical cowboy drawl.

Some of the Legendary Animals are tied to content walls and stories and cannot be found until after completing the associated mission or achievements.

All of the Legendary Animals drop special items and pelts. Taking them to the trapper will unlock new clothing options. When you can, bring the carcass as well. Don’t worry about the pelt quality. Unlike normal animals, all Legendary Animals will drop perfect pelts, so don’t worry about riddling them with bullets, because you will have to. As a general rule, the carnivores are hostile and will attack on sight. The herbivores are not and will instead run.

The Bharati Grizzly Bear is the first Legendary Animal players have access to in the game. It is unlocked in Chapter 2 by completing the mission “Exit Pursued by a Bruised Ego.” At the end of the mission, players can choose to continue hunting the Legendary Bear or return to it later with better guns and higher health, stamina, and dead eye.

The Bharati Grizzly Bear can be found in Grizzlies East, just off of the path by O’Creagh’s Run. The bear will drop the Legendary Bear Pelt and the Legendary Bear Claw. The pelt can be used to make garments from the Trader, but players will need other pelts from other animals to complete the Bear Hunter set. The claw can be used to craft a talisman from the Fence and will need a silver chain bracelet and quartz chunk to complete.

Remember that photo mode is now available and enables players to get some amazing shots as they face off against predators such as the Legendary Bear.

After “Exit Pursued by a Bruised Ego,” other Legendary Animals are accessible. Not all of them are, but many can now be hunted.

The Legendary Beaver is located south of the Elysian Pool in Roanoke Ridge. Unlike the Legendary Bear above, this one isn’t going to tear your throat out, so you can feel a little safer while tracking it. The beaver spawns by the river. It’s bright white and should be easy to recognize compared to other beavers in the area. It’s not as sturdy as the predators in this list and should go down with one good hit.

The Legendary Big Horn Ram is located Northwest of Valentine near Cattail Pond. As with the other animals, the Legendary Ram has a lighter coat and is larger than the rest and will be easy to spot if there are others of the same species in the area. In Eagle Eye, while tracking it, it will flash once it spawns. The Ram drops several items that can be crafted into different parts of garment sets. Because it can be used for multiple things, consider planning which set you want before crafting.

The Legendary Boar can be found in Bluewater Marsh. As an herbivore, it won’t attack you like many of the others on the list. The Legendary Boar is bigger and lighter than others around it to help distinguish it from the herd. Head to Lagras and then continue north along the road. Watch for gators.

In terms of looks, the Legendary Buck is the best. This Legendary Animal is a piebald buck with white and brown splattered fur. He can be found in Big Valley, northwest of Strawberry. Big Valley covers a wide area on the map and the Buck should be near Black Bone Forest, located north of Owanjila but south of Little Creek River. As this is a beautiful animal, make use of photo mode and snap some cool pictures before taking it down.

The Legendary Bullgator is another Legendary Animal locked behind a content wall. It appears in the Chapter 4 mission “Country Pursuits” when it attacks the gang in the swamp. As with the Legendary Bear, the mission introduces the players to the Bullgator and encourages them to come prepared.

Once the mission is completed, players are able to hunt the Bullgator. It should be easy to recognize after playing the mission. The Bullgator is a massive albino alligator that roams Bayou Nwa. As it is a predator it is dangerous and it will charge the player. It is more durable than the other gators in the area and will take many more shots to kill, so be ready if it charges you. The size and speed of the gator can quickly overpower an unprepared player.

The Legendary Cougar is also locked behind a content wall, but not in the same way that the Bear and Bullgator are. The Cougar can only be found in New Austin. Without using cheats or exploiting a glitch, New Austin is only available to the player in the Epilogue.

Cougars are dangerous enough in Red Dead Redemption 2, and the Legendary Cougar is the king. This hostile cat will not hesitate to charge the player hunting it. Be ready to defend yourself if you don’t kill it before your Dead Eye ends. The Legendary Cougar is located in Gaptooth Ridge, east of Tumbleweed, in the farthest corner of the map. Previous Legendary Animals are marked by their white coats, but the Legendary Cougar sports black fur, which makes it all the more fun if you happen to be hunting it at night.

The Legendary Elk is a huge, white elk located in the Cumberland Forest northeast of Valentine. The Elk will spawn near the edge of the forest by Bacchus Station and Fort Wallace. The terrane is rough with mountains, rocks, and cliffs, so traversing it might be an issue. The Elk will take several shots to kill, but isn’t hard to take down.

A small, white, and docile animal, the Legendary Fox spawns by Mattock Pond in the Scarlet Meadows region of Lemoyne. The pond is located a little north of Rhodes. Because of its size it’s not difficult to hunt and will not attack. The white coat will stand out against the foliage of the forest. This is one of the easier Legendary Animals.

Thankfully, unlike a real moose, Red Dead Redemption 2’s moose will not charge the player. This massive megafauna is found well above Annesburg, past Brandywine Drop in Roanoke Ridge. The clues will lead players back and forth over the railroad tracks until it appears on the north side by the water. Other moose and elk may appear in the area. The Legendary Moose is marked by its huge size, massive antlers, and shining white coat. It can tank a lot of shots and if not killed right away, will run. Just be thankful it’s more docile than the actual animal and won’t put its size to use.

Because the Legendary Tatanka Bison also located in New Austin, the animal cannot be hunted until after completing the first chapter of the Epilogue, “The Wheel.” If players have already hunted previous animals that were available earlier, they will be familiar with the process of finding the bison. The tracks are sometimes hard to see and toggling Eagle Eye will help players find the trail. Unlike the White Bison in the north, the Tatanka Bison is black and hidden within the foliage and shadows.

The Legendary White Bison has an added challenge of temperature. Be ready with your best cold weather outfit. The Bison spawns north of Lake Isabella in the snowy mountains of Grizzlies West. The animal is massive with dark, off white fur. And since other bison don’t spawn in the area, it will be easy to spot. Watch for wolves.

The Legendary Wolf spawns in Cotorra Springs, the geysers in Grizzlies East. It’s best to track it slowly and perhaps cover your scent with items as the wolf is more than glad to put up a fight. The wolf will howl and crouch before it attacks, giving players plenty of cues to prepare themselves. Since there’s not a lot of cover by the geysers, you should have a clear shot of the animal. The fur is darker than the average wolf.

The Giaguaro Panther is more difficult than the others. Unlike previous Legendary Animals that wait in the open for the player, the Giaguaro Panther is hidden in the foliage and will try to attack the player. Even the keenest eyes may struggle to spot it thanks to the amount of cover and its dark coat. It should run at the player but if its first attack doesn’t kill it is vulnerable to weapons as it repositions for another strike.

These are all of the Legendary Animals in Red Dead Redemption 2. Most of them follow the same tracking process and hunting the herbivores will be repetitive since they do not pose a threat. The carnivores will offer some challenge when they try to take a bite of the player. Best of luck, hunters. You may need it.