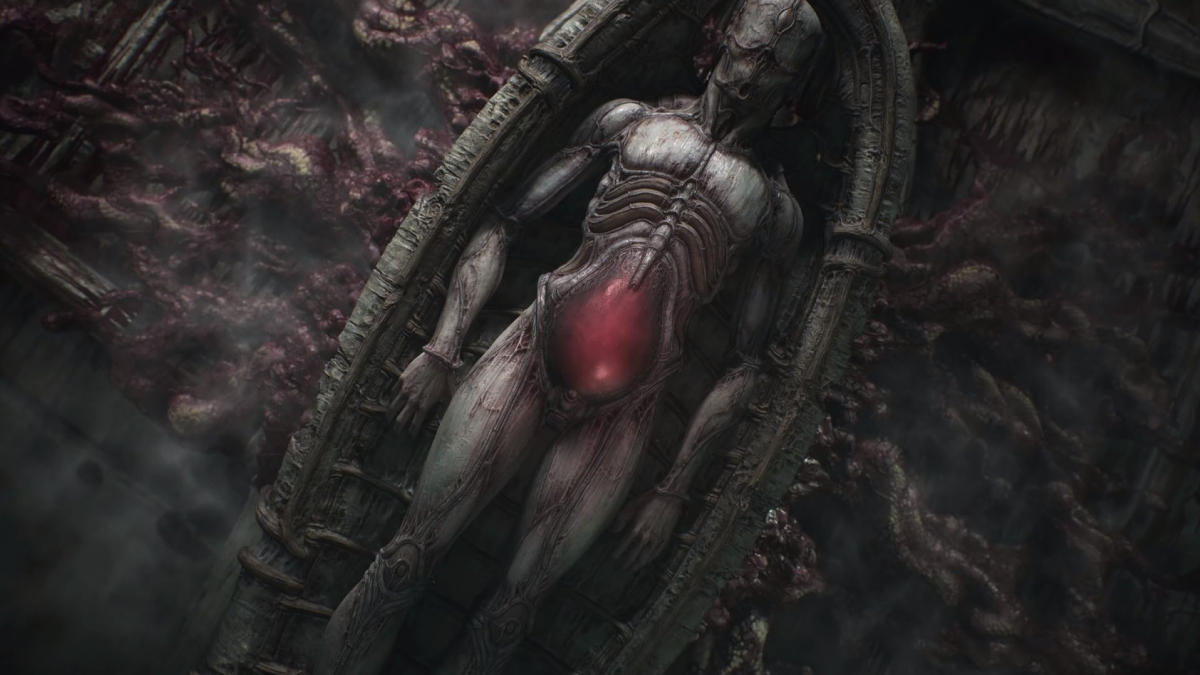 With its H.R. Giger-inspired aesthetics, Scorn seeks to unsettle the player. With no clear idea of who exactly you are playing as, you stumble through the game’s puzzles with no objective in sight. That can make the game’s conclusion leave you scratching your head more than most titles. Here’s what Scorn is about, and what the ending means.

Related: How long does Scorn take to beat? Answered

What is Scorn’s story so far?

Scorn is told in two different perspectives, the first one being significantly shorter than the second. In the first, the player is seemingly left to die after being stuck to the floor of an incubation room.

The player then awakes in the second perspective, which is implied to be one of the eggs the previous protagonist had hatched. With no name, no identity, and no purpose, you wander around the game’s haunting environment before your body gets invaded by a creature that, quite literally, digs itself into your flesh. This gives you the means to protect yourself as it allows you to use the gun-like weapons of the world as you explore the grotesque scenery around you.

As you progress past the game’s puzzles, the creature slowly begins to sink further and further into you, causing you to lose health. That, and you will also begin to notice that the player’s appearance slowly becomes less and less human. This gives players a sense of urgency to reach ‘the end,’ whatever it is, before you and the creature fully merge together. Eventually, the player has to rip the creature off in order to progress further, but it does not die. Ominous.

Seeking assistance, the player straps themselves to a medical contraption in the hopes that a robotic doctor will be able to heal their battered body. However, the doctor instead cuts them right open, tossing their brain into a hivemind above them. Around the area, the player will see dozens of other humanoids who have apparently met the same unfortunate fate.

How does Scorn end?

After becoming one with the hivemind, the player is then made to play as two pregnant-looking humanoids from a previous puzzle, implying that the player’s consciousness has transferred into them, most likely due to said hivemind. They detach the player’s body from the contraption and slowly carry them towards a portal in the distance, which we can assume is the end or exit of this world. However, they begin to slow down the closer they get to it, and eventually halt just short of the exit.

It is at this moment that the creature from before strikes. With the player severely wounded and unable to resist, it attacks and fully merges with the player, forming an amalgamation of flesh left to fester and eventually deteriorate in this barren wasteland.

While Scorn’s storytelling is extremely obscure and left entirely up to reader interpretation, there are several hints scattered throughout the game that heavily suggest that the creature that attached itself to the second humanoid is, in fact, a mutated form of the first humanoid we play as. The first weapon we, as the second humanoid, get in the game is the weapon the first humanoid used in the prologue. Additionally, as the player rips the parasite off their body during Act 5, you will notice that there is a human face lying sideways on the parasite, heavily implying that it had once been a humanoid.

With its voiceless, textless narrative and environmental storytelling, Scorn is a game that is left entirely up to player interpretation.