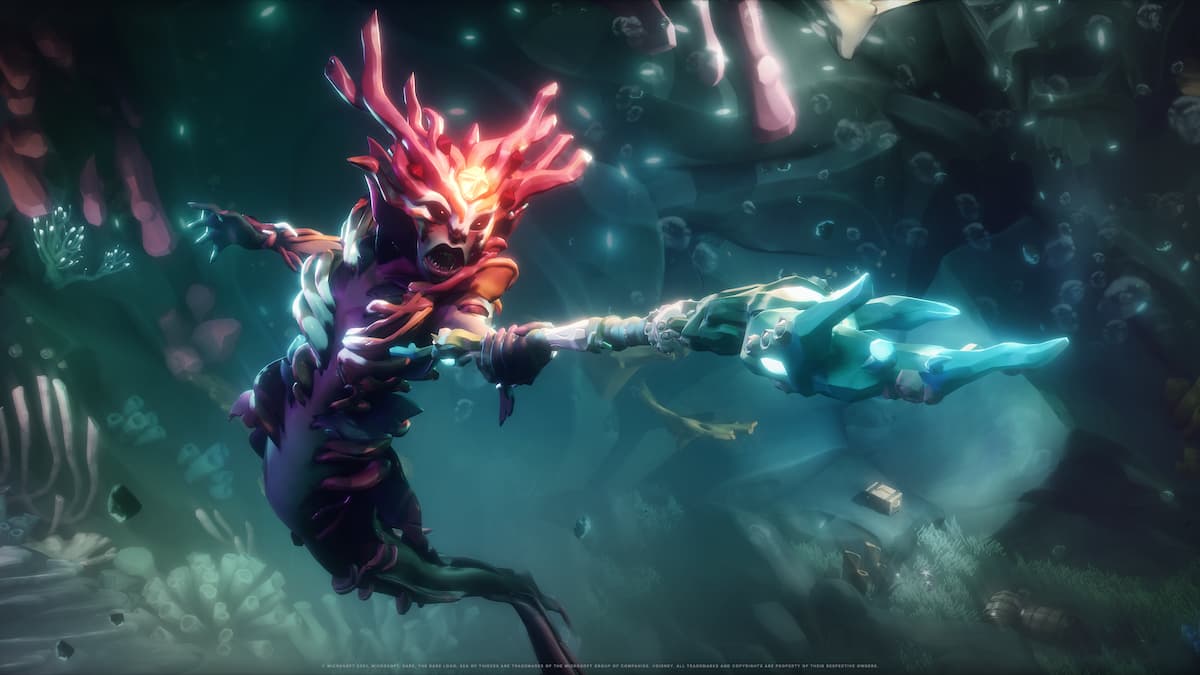 Captain Jack Sparrow is lost in the Sea of the Damned, having tried to obtain a precious treasure essential in saving the Sea of Thieves from Davy Jones. The Sunken Pearl Tall Tale in Sea of Thieves: A Pirate’s Life will take you through a dangerous underwater environment as you search for the Black Pearl, the famous pirate ship that may be your only hope in this long journey.

Your first step will be to vote for The Sunken Pearl Tall Tale at the Castaway’s Camp — the Castaway will sum up the story and tell you you find the Pearl. In your quest inventory is a book, and pages 6 and 7 will contain a map for where you have to go. You will sail to the far southwest corner of the map, directly southwest of Discovery Ridge and west of Old Salts Atoll — be on the lookout for a blue light beaming to the sky. As you are probably starting from a random outpost, your travel time may vary, and keep in mind that you may encounter other players on your way.

A rousing music cue will signal your proximity to the site, and you’ll spot a pile of floating debris covered in coral. Supply up on your ship and prepare to take a dive. Jump into the water and swim below, following a trail of debris. Don’t worry about running out of air, even as you swim deeper — there will be coral releasing air bubbles that you can breathe in. Continue following the path and listen to the wonderful vocals that accompany you, and you’ll make it to the Black Pearl wreckage.

Swim to the front of the top deck, and you will find an opening leading to the lower decks. Swim through and hit prompts to move debris in the way. At the back of the ship, you will see a dormant Ocean Crawler holding the key to the captain’s quarters — take the key from its clutches, and swim out the way you came in. On the top deck, swim to the back of the ship and open the door to the captain’s quarters. Inside, you’ll find Jack’s Compass on a table. If you remember the Pirates of the Caribbean films, this compass points to your heart’s desire.

Follow the direction of the compass — if the compass is acting rather erratically, you may not be swimming low enough and will have to go deeper until you find a cavern covered with coral.

Once you swim up the cavern and find air, you will see a mermaid statue to the left and a glowing round orb to the right that acts as a switch. The mermaid statue can let you return to your ship, or go back to any previous checkpoints. Hit the orb with a weapon to progress through the barrier and swim through the next cavern.

Ahead are Siren statue puzzles where you must raise the water level to progress — we’ve run into occasions where the water has already risen because of other players. But the basic principle here is that you must manipulate three smaller Siren statues by hitting them with a weapon to have them match the artwork on the wall. These statues are holding a trident in one hand and either a stone, coral, or chains in their other hand — they are each holding their trident in either a low, middle, or high position, so hit all of these statues to have them correspond to the artwork and make sure they all have an orange Siren Heart.

After that, hit the larger Siren statue standing in the center with a conch shell, and the statues will sing, raising the water level. There are three levels of these Siren statue puzzles, and assuming the Tall Tale is working as intended, you will be fighting Ocean Crawlers in between puzzles. The second puzzle will have you go back underwater so that all three statues are raising the trident in a high position; you will be shot up a geyser to the next combat encounter on the third level and there will be a Siren heart to pick up after the battle.

On the third level, the statue holding the stone will be on higher ground, and there is an armory box where you can switch to an eye of sight. Go up to land after the third puzzle and go up the spire to the next mermaid statue and glowing switch. Hit it, and you’ll be threatened by the Mysterious Voice, while also gaining access to the Trident of Dark Tides.

The Mysterious Voice reveals herself to be the Siren Queen, and you will swim out of the spire and fight three waves of Sirens above the Black Pearl wreckage. Swim back down the Pearl if you need supplies and air. After offing the Sirens, pick up the Siren Hearts that they drop.

Follow Jack’s Compass to get to a large door with two statues; you will have to activate them and hit them so they match the artwork on the door, like with the previous puzzles. Go through the door to the Citadel.

Follow the cavern all the way to the left until you reach an area with three more Siren statues. Have them match the artwork on the wall, and the large statue can be found up above where there’s space for breathing; you will have to shoot the statue through the holes above you in the way. The water level will lower, and after fighting some ocean crawlers, you can use the pulley to open the next large door.

There is a pulley that lets you lower a broken ship hull that can raise you to higher ground; walk to the sunken wreckage on the other side, and facing the way you came in, look for a small cave on the right. Go through here to see another piece of artwork depicting the Siren statues. Through the coral, you can see the three Siren statues from before, and you will have to shoot them to match the new piece of art that you found. This will be easiest with the Eye of Reach — if you don’t have the sniper rifle equipped, you can go back to the top of that sunken ship to find a weapons box. Once you reorient the statues, the water will rise.

Reach the center platform by swimming to a ladder and climbing up it. Use the pulley there to raise a piece of wood to use as a bridge, but be sure to cross it before it goes back down. To the left will be where you can get the Silver Blade key, and to the right is your next destination, where the large Siren statue you shot is at. Go past to the next room, and there will be a mermaid statue and a switch all the way on the top right. Shoot it, and you should be able to get through the barrier — we have found glitches though, where the switch will not activate.

Revenge of the Silver Blade

Go up to the left to reach the Silver Blade, another sunken ship, and once you reach the top deck, the Siren Queen will taunt you and send Ocean Crawlers to fight you from afar. Use the cannons on the port side to dispatch these Ocean Crawlers. Be sure to stock up on food and cannonballs from the barrels nearby. We have had experiences where these barrels are empty though, presumably from other players ahead of you depleting them.

After the initial combat encounter, use the capstan on the Silver Blade and raise the ship up. It’s arduous, but you can switch around between manning the capstan and shooting cannonballs at Ocean Crawlers, as they will attack you on your way up. You may get struck and the ship will fall for some time, but keep persevering. Once you can no longer rise up, a Kraken — the Siren Queen’s “daughter” — will stop the ship, and Ocean Crawlers will jump on to attack. Afterward, the Kraken will lift up the ship and fight you, after stalking you in the background for most of the Tall Tale.

This battle can be frustrating, as the Kraken will damage you no matter where you are on the ship. From our experience, we haven’t gotten any hit markers from shooting cannons at its face or tentacles, but we have gotten hit markers from shooting its mouth with firearms. Regardless, your main strategy is to just pelt this creature and take the hits, healing up by eating fruit. You will eventually wound the Kraken, who will retreat, and use the capstan to lift the ship until you can climb the mast ladder up.

Swim through the water ahead and you’ll end up in a dry area; to your right is a door that leads to the Tale of Eternal Sorrow commendation, while ahead is a hallway with four Tridents of Dark Tides and the Queen’s room. Hit the switch above and enter to engage the Siren Queen in battle. She will behave like other Sirens you have faced off, and she shouldn’t be too difficult if you have the Trident with you; if you fall in combat, you will respawn in the same room. As you’ll be underwater for this battle, be sure to come up for air every once in a while to save health. There will be two waves of Siren Leaders in between fighting the Queen.

After you defeat the Siren Queen, the water will lower and you can go swim down a hole in the middle of the room. Hit the switch to go through the barrier and you’ll be in a room with what appears to be a coral jail cell. There are three mermaid statues that you can destroy with your firearm — once you destroy them, some special guests from the Pirates of the Caribbean movies will appear. Give Jack’s Compass back to Gibbs, and swim down the nearby hole to exit and complete the Tall Tale — a Siren statue ahead can take you back to your ship.