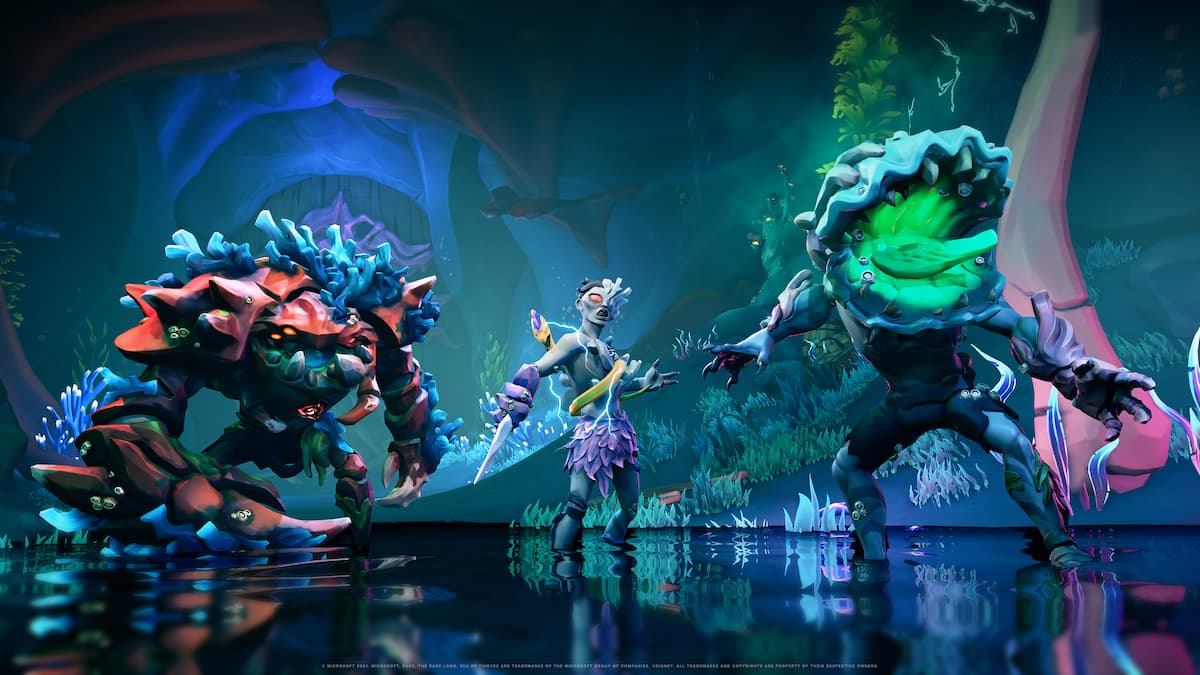 Sea of Thieves: A Pirate’s Life brings a number of new enemy types to fight, with one of the new factions being Ocean Crawlers. These bipedal crustaceans may attack you from land or sea, and they will have tough shells to crack. There are three different variants of the Ocean Crawlers to take on, all with their own unique abilities, along with different strategies to defeat them in combat.

Related: How and where to find and defeat Sirens in Sea of Thieves

Like Skeletons, the Ocean Crawlers will spawn by digging themselves out of the ground. While you will encounter them as part of A Pirate’s Life, they will also be populating the wider world of Sea of Thieves. Defeating Ocean Crawlers has the chance of dropping Siren Gems, which can be sold to any Trading Company. Dying from physical attacks from these mob enemies will get you the green Flame of Fate in the Ferry of the Damned.

The Eel-ectric Ocean Crawler, as the name implies, attacks players with electrical moves. These enemies are quite nimble, making them tough targets to corner. The Eel-ectric will dash around with electric energy surrounding it, shocking and damaging you should you be in its path. In terms of long-range attacks, the Eel-ectric can shoot out bubbles of lightning that will damage. Its defensive move is an Electric Shield, which will discharge electricity should you hit it; the lightning will strike back and hit you and your crewmates in a chain.

As the Eel-ectric is good at zoning with its electricity, it is best to dispatch it with long-range attacks with your firearm or throwables. Using your sword can backfire, as it can escape with its dash or raise its Electric Shield, both of which will be damaging. Luckily, if you die from an electrical Eel-ectric attack, you will be able to get the White Flame of Fate in the Ferry of the Damned, which used to only be possible through getting struck by lightning in-game.

The tank of the Ocean Crawlers is the Crab, which is slow but quite burly and powerful. Its physical attacks are devastating and earth-shaking, but like fighting Ashen Lords, you can dodge these attacks by sidestepping or running away and attack them with your firearm or sword right after. It will summon a Coral Shield to protect its fellow Ocean Crawlers, but the Crab will be immobile and open for your attacks.

With a clam for a head and a variety of area denial attacks, the Hermit is an annoying force to be reckoned with. The Hermits will be at the forefront of a battle, and it can hide back in the ground and burrow back out to surprise and attack you. The Hermit will attempt to charge at you and stun you with a headbutt, but should you successfully dodge this charge, the Hermit will be left very vulnerable to attack. Its most irritating attack, however, is its poison breath. If you are in the range of its green spores, you will be damaged over time and have your vision impaired, similar to getting a snake bite in the game.