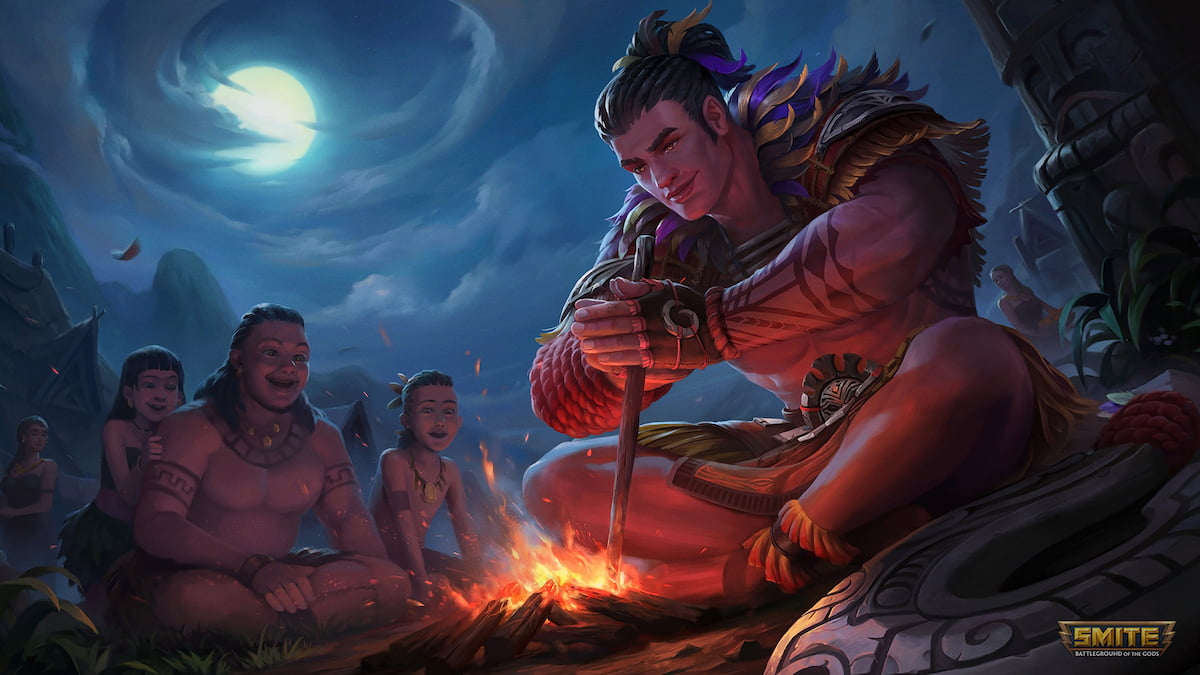 For Smite’s 9.10 update, we receive our final god for 2022: Maui, a demigod. Although Maui is not completely a god, he will be one in the Guardian role. He will have access to multiple CC abilities, and he’ll have his iconic hook to draw in enemies closer to him and assist his allies in keeping them close to him. This guide will cover the patch notes for 9.10, breaking down everything that will come to Smite, alongside Maui.

Welcome to this year’s Reaping Event!

Every time you purchase an item from the Reaping event, you will also receive a Pumpkin. You can collect three Pumpkins from the three direct purchase Skins and three Pumpkins by rolling any three items from the Halloween Chest or directly purchasing the Halloween Chest Skins. Collecting 3 Pumpkins will unlock the Dark Magic Aphrodite Skin, and collect up to six Pumpkins to unlock the collection reward Toony Terror Scylla Skin!

The new Conquest Map update is definitely causing some shifts in the meta. The early game objective in the duo lane leads to more early aggression and value. We are making this camp a little harder to clear while nerfing the reward to ensure this isn’t causing too much snowballing. Additionally, we are adjusting the Gold Fury and the Pyromancer to be easier to secure earlier in the game. These base stat nerfs will make them deal less damage and die faster so that players can attempt more unique plays with early-game advantages instead of waiting for clear team fight wipes. This will also come at the cost of a small gold and XP loss to the base values of these objectives, with a heavier penalty on Pyromancer. Currently, the Pyromancer is often killed when a team knows that their opponent will secure gold fury; we want this tradeoff to favor the Gold Fury killing team more than it currently does.

Purification Beads are a core counter to one of Smite’s strongest mechanics: crowd control. Over the years, we have investigated ways to make the relic feel more responsive and user-friendly

Many of the nerfs in today’s patch are also closely tied to buffs of similar items. We are continuing to shift some key items across multiple roles to smooth out power spikes and to help even the playing field between tanks and dps. Warlock’s Staff provides huge power, a lot of HP, and % penetration making it an all around strong item, when its competitors like Book of Thoth and Charon’s Coin were more limited in their range and provided less overall stats. We are nerfing Warlock’s and buffing the others to balance this out.

Book is getting an especially interesting buff this week, and will now offer a brand new stat of 10 Magical Penetration (flat) upon evolving. This gives mages another option for building into flat pen and creates a nice rivalry between the two mage stacking items.

This change is most closely related to the Transcendence nerf we saw in the last Bonus Update. We want to keep helping out ability-based Assassins who have fallen in many metrics since 9.5. We are seeing them climb back up slowly, but the nerf on Transcendence could hurt that. Since it felt quite necessary to nerf that Item for Hunters and Warriors, we want to buff an item more specifically for Assassins to make up for it.

Tanks are also getting some new changes. We took away a lot of their possible damage output in the last bonus patch so today we are going to give them back some tankiness. Heartward Amulet and its Glyphs will provide a better protections aura, and Hide of the Nemean Lion is going to gain its block staks faster.

Amulet of the Stronghold

Hide of the Nemean Lion

Hades in the SPL!? It sure is exciting but this god has been cruising at the top of the win% charts for years, and finally this is being recognized at higher levels of play. Hades was just one of the gods who has recently risen in strength, all because of this powerful glyph. This item provides so much damage and survivability that nearly any mage that could use it has shot up noticeably, and its about time we toned it down.

And to conclude this update, we have two more changes to these earrings. The items are still quite stat efficient and instead of nerfing those stats, we are increasing their costs. This should make building them feel a bit more fair and hopefully they are approaching a solid balance point. We are also doing some adjustment to the visual FX associated with these items so that allies can better see the pickups and so that opponents have a better idea of who is currently buffed by them.

We have a few buffs for each class in today’s update, starting with Assassins. Camazotz has fallen off through the back half of this season. We know he can be a multi-role force, so we are taking small steps when buffing him. Increasing Screech’s Scaling helps him clear and poke and encourages high power builds.

It is time to lift the hammer once more. There is a lot of love for Thor in SMITE but he has mostly been relegated to a pocket pick, rarely seeing a presence in the greater meta. We are looking at a pretty spicy change for this time to really reinvigorate him, so Tectonic Rift will now deal damage. This amount of damage is low, but it will be able to trigger items and gives Thor a lot more flexibility in his ability to go all-in or to just poke. This damage source will also work on the empowered attack from his Ultimate, for an extra jolt of energy.

Moving on to guardians, Ganesha has seen a bit of SPL play but has been struggling across the rest of the game, even high MMR ranked. For his buffs we are looking to make him feel better to control. A lower self slow and lower cooldown dash will make sure this elephant is moving!

Another blast from the past, Athena is back for buffs. After she received some more damage she primarily became a jungler, and a good one, but we are aiming to buff her along more traditional supportive lines today. Lowering the cooldown on her primary CC will certainly help her assist her team, and she will also gain mitigations for herself while channeling her Ultimate to make sure it never feels wasted.

SMITE’s resident Warrior strong man has been missing his workouts. We are aware that Dimishing Returns has had some effect on him, but we want to be especially hesitant in adding too much CC back immediately, so we are looking to find some more damage oriented buffs instead. If Hercules continues to need buffs we will be open to changing his CC durations or ruling in the future, but for now we want him to work his way back into that clearly aggressive Warrior tier that he used to be a cornerstone of.

The SMITE Masters Tournament got a lot of players interested in playing Tyr, but overall the god still is not putting up great numbers. For stance changers, its generally not super exciting to level up their Ultimates so we are loading up Tyr with some more stats if he is willing to put points into this ability. This will give him some more help all-around.

The last Warrior getting buffs today is also the newest, Shiva! He started strong and could flex into multiple roles, but those early nerfs and recent meta shifts have sent him further down than expected. We are buffing him mostly through his utility, which stems from his unique passive ability. These bonus effects across his kit are now going to be more intense to reward players who put the effort into learning his kit.

As we move onto Mages we have a diverse cast to buff. Morgan Le Fay is a traditional ranged DPS mage. With little mobility she relies on her damage and crowd control to be effective. Her strong launch led to a few additional nerfs that are now looking safe to revert. Two key parts of her kit are seeing cooldown reductions to help her to always make an impact.

Sol is a Mage ADC that we have been seeing less of lately. Hunters surged in the post 9.5 era, but the itemization has held Mage ADCs back. As we are now seeing the return of gods like Olorun and Freya, we are now looking to make sure Sol can find her way back into the meta as well. With two different Power Scaling buffs, Sol should be able to better keep up in the late game. Along this topic, we might also be looking to buff Chronos in a future update.

He had some recent buffs, but hes still looking for more. Janus can take over the game when he is too strong, so we are being careful with him. After seeing the data from his last round it certainly looks safe to keep moving. This hyper-mobile mage will be getting a cooldown buff to a very strong zone control ability, threshold, as well as some power scaling on his Ultimate to help him deal more reasonable damage in the higher this TTK SMITE.

Through Space and Time

The true duelist, the pinnacle of the hunter class, Anhur, needs some help. This god is deceivingly difficult to master. With a relatively straightforward gameplan, his attacks are difficult to string together optimally. This make us approach Anhur’s data evaluation a bit differently, skewing towards his popularity and performance in higher MMR scenarios. Over the season he has noticeably dropped off from those levels of play, so we are giving him a needed boost on his most impactful ability. Impale will now be a better all around damage source to help him clear and take down enemy gods.

Dodge, Duck, Dip, Dive and Dodge. Charybdis sure is evasive, and thats where priorities usually lie when picking her, but even that unique strength has become less valued over time. In order to help her compete with the DPS output of other hunters we are buffing her two key damaging abilities. It should be noted that this “splinter damage” is not just the AoE, it also applies to every direct hit.

New gods tend to have a unique perception to be more powerful than they actually are. We anticipated Ishtar would have a learning curve, and also have some unique strengths, so we were careful not to rush to buffs too soon. Her data has shown her to be slightly on the lower end for win%, although her popularity is some of the strongest data we have seen from a new god in years. We are looking to address some primary community discussion topics with these buffs. Making her Imbue Arrows more impactful, especially when ranked up, and Increasing the damage output from Rolling Thunder will make this goddess even more satisfying to play.