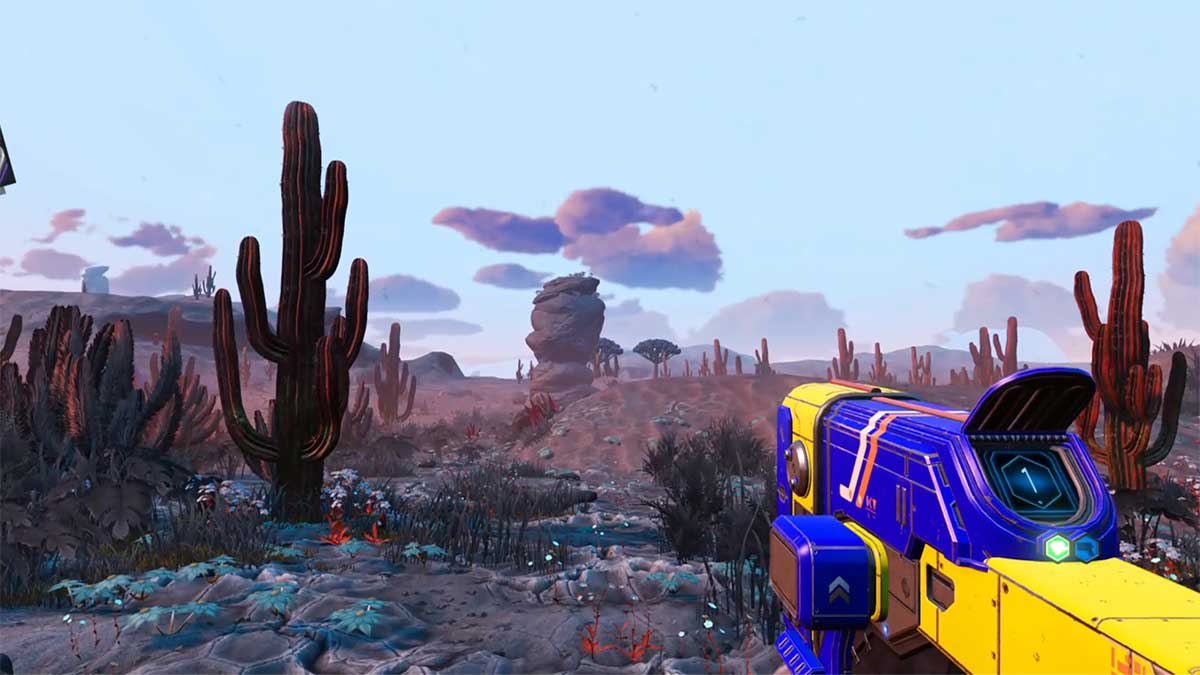 No Man’s Sky may be a game about exploring a near-endless universe on the surface, but darker things lurk beneath the surface. To defend yourself from those darker aspects of the game, such as Sentinels, other players, and pirates, you need weapons. This guide outlines the ten best Multi-Tool weapons in No Man’s Sky, so you know what to keep in your arsenal to ensure you can fight back.

Related: How to manually save in No Man’s Sky

What are the 10 best Multi-Tool weapons in No Man’s Sky?

This list ranks the ten best Multi-Tool weapons in No Man’s Sky from best at the top to worst at the bottom. However, each weapon is still helpful and can defend you against Sentinels or an angry random player. There’s no such thing as a useless weapon, but the one at the top here is definitely the most powerful.

The Scatter Blaster is effectively a shotgun. It fires eight projectiles per blast and will eat through ammunition faster than a hungry relative eats you out of house and home at Christmas. It’s perfect for dealing with multiple enemies because the wide burst catches almost anything in front of you. While other weapons might be more powerful, this is the best all-rounder because there’s no situation it can’t get you out of, be it Biological Horrors or Sentinels you’re trying to steal from.

If you ever feel like a grenade would solve all of your problems, the Plasma Launcher is what you’re looking for. It lobs a great mass of plasma at your enemies and bounces around until its internal timer goes off. That causes an explosion so massive that nothing is left standing, particularly when you’ve modded the weapon a little.

No Man’s Sky’s answer to a high-powered sniper rifle. The Blaze Javelin is a rifle you can sit on top of a building with and protect your settlement from anything coming its way. Pirates in ships, Sentinels, and any player approaching under a fake flag of peace will fall to your might miles from your position.

This weapon stuns enemies into submission for a short time. However, you can mod it so that any damage you deal to those enemies while they’re stunned is greatly increased, allowing you to wipe out waves of Sentinels while they look on helplessly as you crush them underfoot.

The Neutron Cannon is an ace up your sleeve. Fire away at enemies for scattering shots similar to a shotgun, but hold that trigger and you’ll charge up an immense shot that deals colossal amounts of damage. This is a jack of all trades weapon. It’s great in most instances, but you won’t find any fight easy because it just doesn’t hone in on one style of combat enough.

Related: How to get the Neutron Cannon weapon in No Man’s Sky

The Pulse Spitter is your standard machine gun with ridiculous recoil. You’ll find yourself firing into the sky half the time at first, which is why you must upgrade it and mod it if you’re planning on using it. There are, for example, upgrades that allow you to deal damage over time and these will see your enemies burn before your very eyes if you’re skilled enough.

This is the best combination of weapon and terrain tool in the game. Each grenade you launch will deal massive damage and carve a huge hole in the crust of the planet you’re currently on. It’s dangerous to everyone nearby, including yourself. However, when used correctly, you can find yourself with handy pockets of cover around the battlefield to reload inside of.

The Incinerator is utterly useless against most enemies, but it’s the best for PvP that we’ve seen in No Man’s Sky. Other players can’t escape the flames, and they deal decent damage over time. Anyone stupid enough to take you on while you’re packing this is going to get more than just hot under the collar.

This is your basic handgun type weapon, but it’s still powerful in the hands of the right player. It’s an accurate shot and you can upgrade it to do some very mean things to your enemies, blowing them up or burning them, for example. However, you may want to invest in something fancier than the Boltcaster, so try not to upgrade it too much if you plan to go for any other weapon on this list.

This weapon is more of a joke than anything else. It deals damage to alien fauna in order to extract certain materials from them. Don’t go into a fight with this. It’s not completely useless, but it’s about as close as you’ll get in No Man’s Sky.