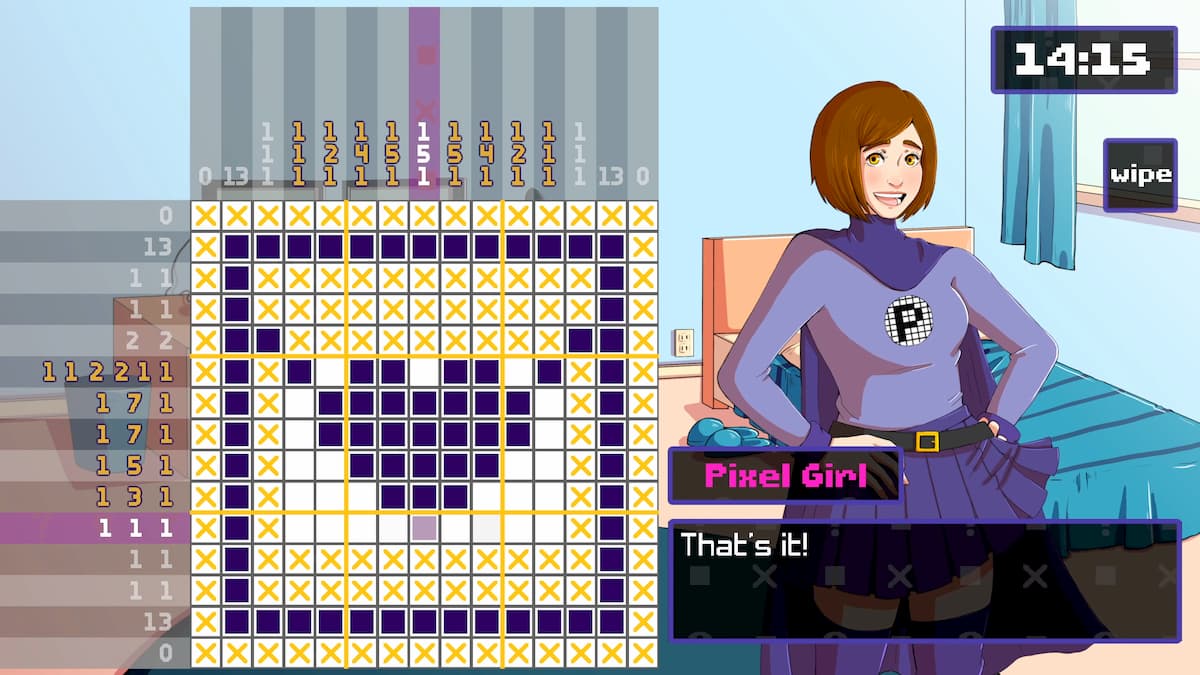 Puzzle games are a perfect fit for any portable console, and the Picross subgenre in particular has always had a home with Nintendo platforms. Also known as a nonogram, Picross puzzles are games of logic, where players fill out a grid to form a picture, using numbers as hints. The term Picross comes from “picture crossword,” and Nintendo devices from the Game Boy to the Switch have housed these games. We found ten of the best Picross games on Switch, many featuring other gameplay elements and concepts to shake up the formula. The list below is in alphabetical order.

What if Picross was just a bit more colorful? Depixtion from DevHour Games adds a bit of flair to the usual nonogram gameplay, offering the largest color palette of any game in the genre. These puzzles will take a bit more doing — unlike traditional Picross, the puzzles in Depixtion have three layers to reveal. Eventually, you’ll come out with a bright and distinct image. It’s great for nonogram veterans, but it’s easy to pick up for any novice.

This might be cheating a little — Mario’s Super Picross is not a native Nintendo Switch game, but there’s an official way to play it on the console. Online subscribers can play Mario’s Super Picross for free on the Super Nintendo – Nintendo Switch Online application and experience one of the earliest Picross games to date. Naturally, you’ll end up making a number of Mario-themed pictures with your hammer and chisel.

The visual novel and Picross mash-up Murder by Numbers depicts a murder mystery in a surprisingly fun and lighthearted fashion. Actress Honor Mizrahi finds herself conducting the detective work that her fictional character would usually do when her show’s producer is found bludgeoned to death. Honor comes across SCOUT, a quirky and somewhat oblivious robot who helps you to investigate crime scenes. This being a Picross game and whatnot, said investigating is accomplished through nonogram puzzles. In between, you’ll also be interviewing suspects and presenting evidence.

Nonograms Prophecy isn’t a perfect Picross game, according to some reviews, but its visual and style and themes are definitely worth giving a look at. One quick glance at this game from No Gravity Games and the ancient Greek aesthetic should be evident. Unlike most nonogram games, Nonograms Prophecy adds color puzzles as well to keep the gears churning in your head. Additionally, this game supports three languages.

Picross: Lord of the Nazarick

Developer Jupiter is perhaps the most renowned Picross developer, with a number of their titles keeping the Picross name thriving. The studio took a brief pivot with Picross: Lord of the Nazarick, however, crossing over the Picross brand with the Overlord series. An unusual collaboration for sure, but it does lend to some fun and fantastical images alongside the usual nonogram gameplay. You’ll be following protagonist Ainz Ooal Gown and uncover memories from the characters, all while solving puzzles that resemble items, monsters, and other trinkets from the Overlord series.

If you just need a pure fix of Picross on your Switch, then look into Jupiter’s Picross S. There are four entries in the series so far, with the latest being Picross S4. Each iteration adds a new game mode, so S4 should be the most stacked feature-wise. Modes include a Clip Picross feature, where the player solves a larger puzzle by completing smaller puzzles within it, Color Picross, which adds some complexity and layers to both the visuals and your strategy, and Extra, which gives the player large 30×30 puzzles to solve.

NanoPiko crafted an RPG that uses Picross as the basis for its combat in PictoQuest: The Cursed Grids. You’ll traverse through a map and fight enemies and bosses through nonogram puzzles, chipping away at their health while avoiding attacks and using your own power-ups. You’ll be able to earn gold and spend it on items to aid you in battle, and you can also participate in sidequests. PictoQuest may not have the most complex story out there, but it’s hard not to feel at least a little charmed by the RPG trappings.

Piczle Cross Adventure from developer Score Studios has a really appealing aesthetic for nostalgic players. This Picross game contains RPG elements, with a fleshed-out story and entertaining characters, all under a filter that resembles the CRT screens of old. You’ll navigate through an overworld and progress by completing nonogram puzzles. This will help you to unlock more parts of the menu and also gain XP for leveling up. It’s an attractive pixel art style, so give this one a look if you want your Picross to look a little more retro.

In a fun and unusual mash-up, Pixel Puzzle Makeout League from Rude Ghost Games combines Picross gameplay with elements of a dating sim visual novel. You play as Pixel Girl, the optimistic and bouncy Picross-themed superheroine who serves as the latest recruit for the Puzzle League. Pixel Girl’s power is to turn any problem she encounters into a nonogram puzzle to solve, and you’ll be doing this throughout the game as she runs into different pickles. On the Switch specifically, you can use the touch screen to solve these puzzles, and accessibility options allow you to customize your Picross experience. Warm up your mind with some Picross, and then gather the moxie to date one of your four co-workers, one of which happens to be a giant, sentient puzzle piece.

Picross games are already pretty complex and a lot to wrap your head around, but Voxelgram ups the ante in a fairly entertaining fashion. These puzzles are 3D and procedurally generated; you’ll follow the same logic using the numbered hints, but it’s quite astounding how you eventually sculpt an entire object. Eventually, you’ll be left with these delightful little dioramas of your own creation.