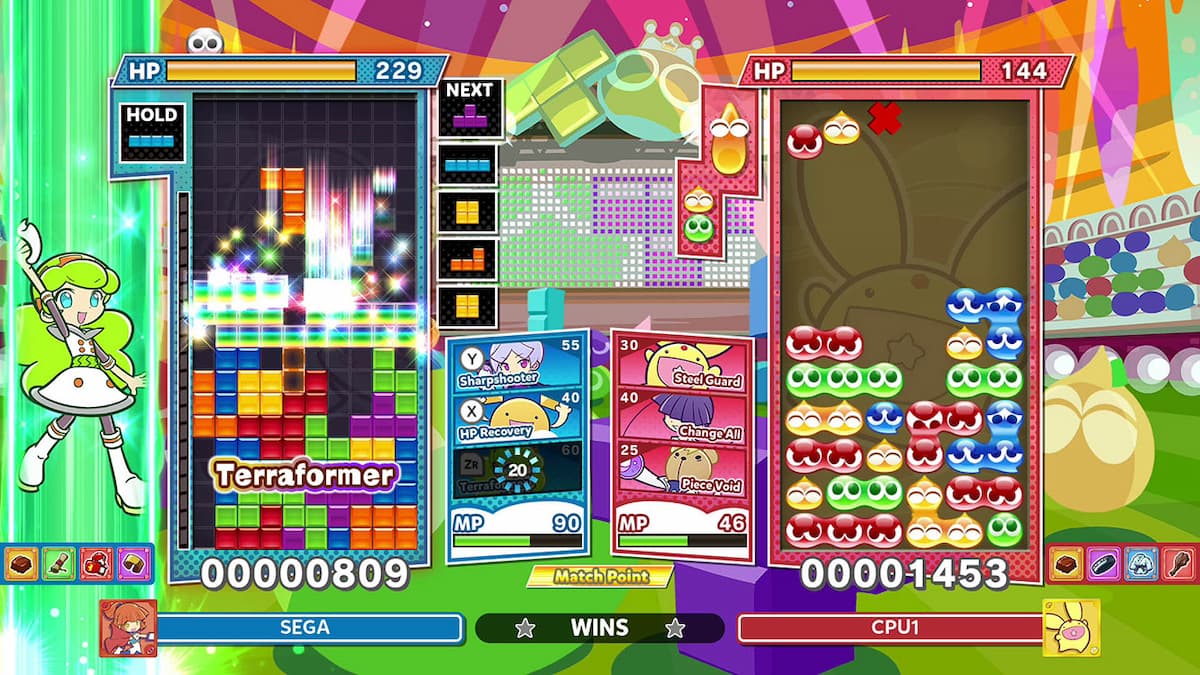 With the essential feature of handheld gameplay, the Nintendo Switch is a fitting platform to casually play puzzle games on. And the Switch has plenty to offer across a number of different puzzle subgenres, from falling block puzzle games, mysteries to solve, cooperative problem solving, and other general brainteasers. There are some obvious Nintendo-published standouts in the larger genre, including Snipperclips and Captain Toad: Treasure Tracker, but there are plenty of third-party gems to explore as well. These are 10 of just some of the best puzzle games for Nintendo Switch, in alphabetical order.

Puzzle games are nothing without a sense of accomplishment and triumph once you solve them at the end, and Baba Is You is full of complicated puzzles that will make you feel like the smartest person around for cracking them. Starring a bunny-like creature named Baba, this indie game will have you moving around tiles that act as conditionals, changing the properties of objects on the field to get you into a winning state. It’s almost like a visual representation of programming, and like programming, it will surely lead to frustrating dead ends. The rules are yours to manipulate — you just have to know how to bend them.

The latest entry of the BoxBoy series adds a second player, with both Qbby and Qucy forming strings of boxes together to traverse levels. They’ll help each other out by creating platforms and bridges, all with a limited number of boxes that can be used at once for each stage. Even with a minimalist mostly black-and-white and square art style, the titular BoxBoy and BoxGirl elevate the charm of this puzzle platformer from Kirby developer HAL Laboratory.

Adventure game The Gardens Between is single player and has a focus on story, following the young duo of Arina and Frendt. The journey they take through a dreamlike garden is both an examination and a metaphor for their friendship, as they manipulate time, relive memories, and unlock secrets. With vibrant colors, lively animations, and a heartfelt story, The Gardens Between stands out for its hybrid of emotion and surrealism.

Originally a standout at the launch of Apple Arcade, Grindstone is a puzzle-battler game with over 200 levels and a distinct cartoon aesthetic. You’ll be slashing through monsters on a grid, using color matching and strategic movements to pull off combos. There are plenty of bosses to fight, resources to loot, and attempt to conquer leaderboards.

Long before designer Tetsuya Mizuguchi fulfilled a career dream by producing Tetris Effect, Lumines was the music-based falling block puzzle game that he made, lacking the Tetris license at the time. But as its own original puzzle game, Lumines made a strong impression when it debuted on the PSP — Lumines requires you to create squares of the same color from 2×2 pieces, all with stunning visuals and addicting electronic music in the background. Lumines Remastered ended up being a perfect fit on the handheld Switch, with improved visual effects and even HD Rumble feedback to the rhythm of the music.

Anyone with an appreciation for both puzzle games and especially public transit systems will certainly take an interest in Mini Metro from Dinosaur Polo Club. The premise is simple, but Mini Metro certainly presents a challenge, as players create transit maps in real time and attempt to juggle the needs of commuters. The levels are loosely based on real cities, but the stations and passengers themselves, represented by shapes, are procedurally generated. The Switch version features an exclusive multiplayer mode, for transportation enthusiasts who want to try their hand at handling the needs of simulated metro communities.

Following up from Sega’s hybrid of Tetris and their tile-matching Puyo Puyo series is Puyo Puyo Tetris 2, a sequel that expands on the original in several ways. Players can face off against each other, regardless of which falling block puzzle game they’re playing, or even compete in a combination Fusion mode that challenges everything they know about either game. Like the first game, Puyo Puyo Tetris 2 has a fully voice acted single player story mode, with quirky characters and dialogue helping to justify the unexpected marriage of these two game modes. Skill Battles add an unexpected RPG element to the game, with characters offering skills for players to use on the board. And Sega being Sega, Sonic the Hedgehog himself is playable as a character after a post-launch update.

Return of the Obra Dinn

Papers, Please developer Lucas Pope eventually brought Return of the Obra Dinn to Nintendo Switch — this mystery game is one based entirely on observation and deduction. You play as an insurance agent investigating the reappearance of an abandoned ship, and using a special pocket watch called the Memento Mortem, you are able to observe the deaths of the crew members and passengers at a limited capacity. The devil is in the details, and you’ll use the limited dialogue and frozen images in time to determine the identity of all on board, who (or what) killed them, and what everyone’s final fate was. Return of the Obra Dinn sports a monochromatic Macintosh art style, and is rounded out by its excellent audio design.

Snipperclips developers SFB Games brought back a legacy character of theirs, Detective Grimoire, for this cartoony murder mystery. Grimoire and his assistant Sally are on the case of Freya Fellow, a young girl found seemingly murdered while painting. Players will observe rooms to search for clues and evidence, and they will have to uncover the secrets of Tangle Tower by solving Professor Layton-like puzzles. Additionally, you as Grimoire will interrogate the eccentric family members at this tower, putting pieces of evidence together to come up with some far-fetched answers behind this bizarre killing.

In this twisted fantasy take on Tetris, Tricky Towers has players stacking up falling blocks, but not to clear lines — instead, players are competing to build the tallest and most stable towers. Players can also cast spells on each other to alter the situation to their advantage, with powers either helping yourself or hindering others by altering physics. At some point, Tricky Towers looks less like Tetris and more like Jenga.