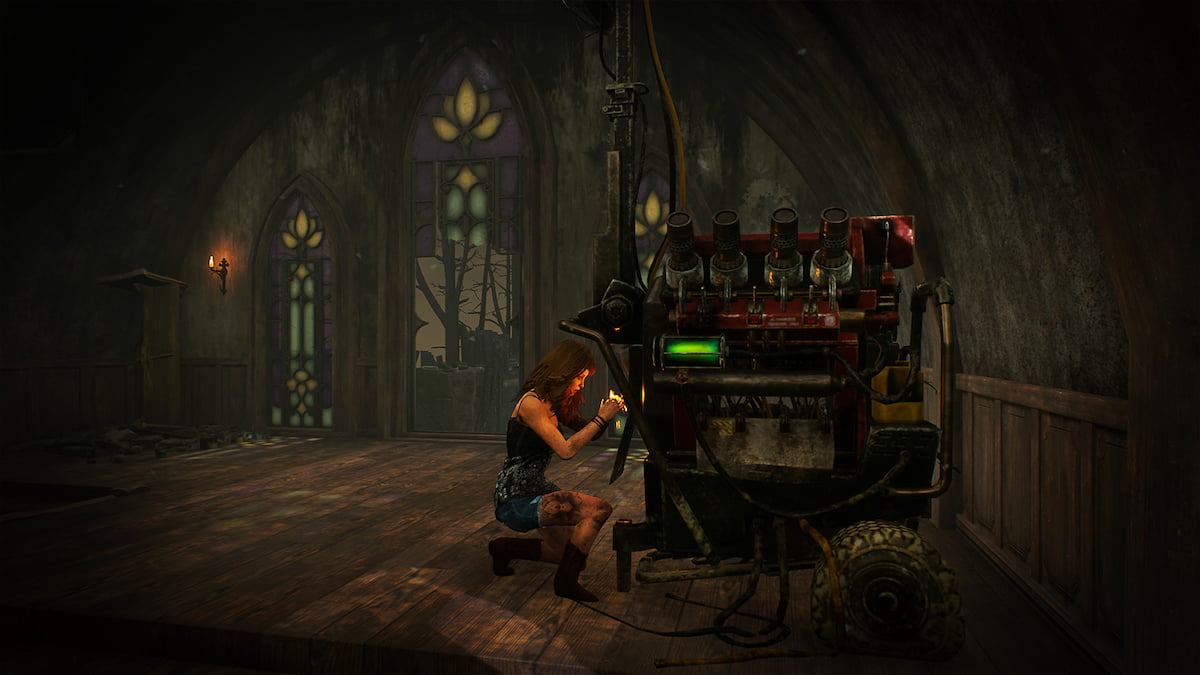 Ace Visconti is a helpful Survivor who is capable of providing luck to everyone on the team. His Ace in the Hole perk can be beneficial, but there are other options available to him, and you can choose to run him as a healer to support your teammates. Ace is a good character to help you understand the mechanics, but you won’t be overwhelmed when you’re first playing.

In the Evil Dead franchise, Ash Williams is a resilient character who can take a good amount of punishment. When using him, Ash’s Flip-Flop is valuable because of how much danger he will be in, and the Mettle of Man perk rewards you for engaging the Killer near an ally, so you’ll want to make sure you stick close to your allies while using it. Ash is a formidable character that requires more attention, but it’s a good way to teach you how to go face-to-face with the Killer and remain a key player on your team.

From the Left 4 Dead game, Bill Overbeck is another aggressive Survivor you can choose to play. His Borrowed Time and Unbreakable perks are strong, making him one of the better characters to use in the game. With Borrowed Time, any ally receives the Endurance effect for a few seconds after being removed from a hook. If you have Unbreakable equipped, you can completely recover from the Dying State once per trial. Unbreakable is a good way to forgive yourself if you mess up against the Killer, but you’ll need to be careful once it goes away. Bill is a good starting character who helps support any team.

If you want to try your hand at healing a team, Claudette Morel is a good choice. With Claudette, you gain access to the Botany Knowledge perk to increase your healing speed with med-kits and Self-Care, allowing you to heal without a med-kit at the cost of personal healing speed. You’ll want to stick close to your Survivors and support them by restoring their health while also running around and completing generators.

David King is another robust Survivor who can take plenty of punishment from the Killer. David’s Dead Hard perk allows him to dash away and sprint forward without taking any damage, giving chase to a Killer who might be hunting him. If you want to act as a diversion for your team, Dead Hard is a required perk. David’s kit is pretty customizable, and you can play around with the available perks to see how he plays for you.

Dwight Fairfield is another useful Survivor and is also considered one of the better choices in the game. A notable perk he can use, Prove Thyself, increases his repair speed by the number of Survivors nearby, and works for other Survivors near him. If you want to focus on working on generators and cooperating with your team, Dwight is instrumental. You will need to communicate with your party, and when you’re first playing, you may struggle with how to best evade the Killer. However, teamwork is critical in Dead by Daylight.

For those who want to focus on objectives, we recommend trying out Feng Min. Two of her perks, Technician and Lithe, make her an ideal Survivor to play. With Technician, the sound of you repairing is toned down. If you fail a Skill Check with this perk, you will not cause a Generator Explosion but increases the Generator’s regression, which can be problematic. However, it’s better than being caught by the Killer. Using her requires some flexibility in your gameplay but gives you a great chance to effectively make split-second decisions to outwit a Killer.

When you’re playing by yourself, Jake Park is a suitable Survivor for you to use. You can go out of your way to target the Killer with the Saboteur perk and directly sabotage the hooks without a toolbox. Also, if you need to be more aggressive in your movements and maneuver around a map, the Calm Spirit perk lowers the chance of Crows giving away your position. Jake is a flexible Survivor who can work well with a variety of perks, allowing you to take advantage of this in any match, with or without friends.

For those worried about being caught by the Killer, Kate Denson is a difficult Survivor to catch. By using her Boil Over perk, she can make it far more difficult for the Killer to hold her and obscures their vision of any nearby hooks. Also, you can use Windows of Opportunity to figure out if you can create a hectic path for a Killer when they’re chasing you. It gives Kate plenty of leeway to focus on objectives, and when she is running from a Killer, she will be challenging to catch and place on a hook.

Meg Thomas is an agile Survivor. She’s swift, and two of her perks, Sprint Burst and Adrenaline, can be make-or-break Perks you use during a Trial. You can use Sprint Burst to quickly move away from a Killer chasing you, losing them, and Adrenaline is useful once the Exit Gates have been activated. You’ll need to wait for the Exit Gates to turn on to make the most out of Adrenaline, but it can be a critical way to reach the exit before the Killer catches you close to the end of the game.