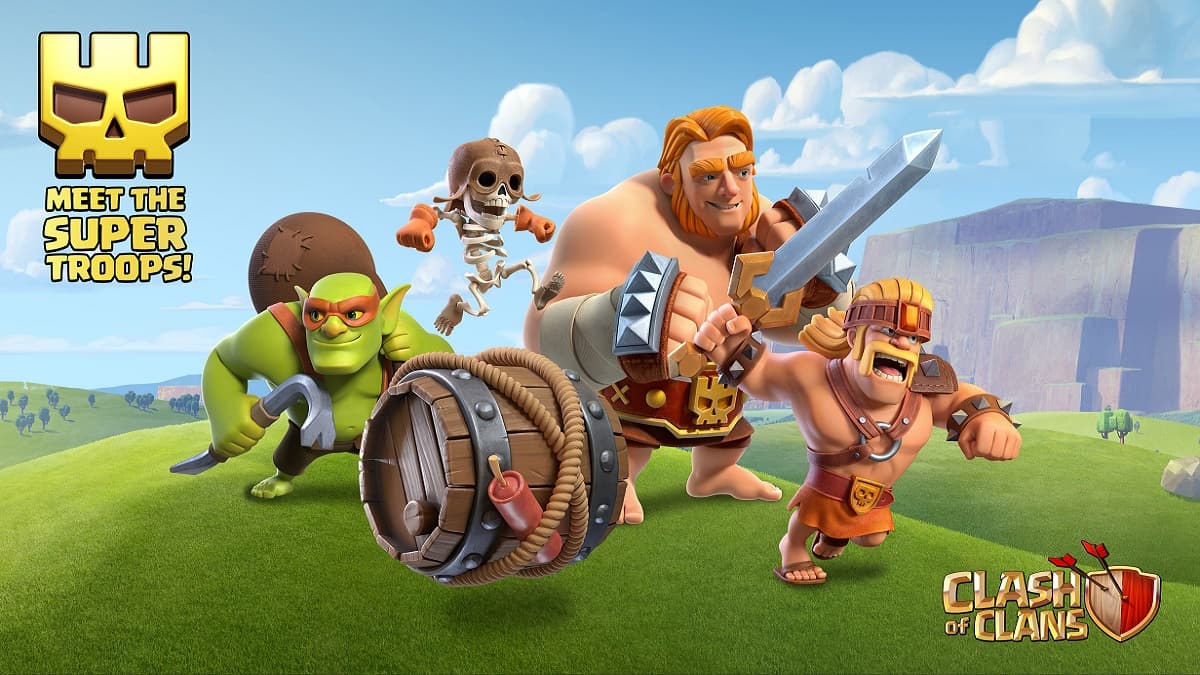 In the Clash of Clans Spring 2020 update, Supercell introduced a brand new mechanic to the game called Super Troops. These units can be used in the Home Village and operate as a stronger version of their regular counterpart, providing more sustain and damage with a temporary ability that makes them useful for certain situations.

You can only obtain the ability to use one type of super troop in your army per week, meaning you can’t mix and match them within your compositions and strategies. They are only available after reaching Town Hall level 11, and cost a set amount of dark elixir to replace the standard version of the selected troop, depending on which super troop you choose.

The current super troops available include:

Some of them are more useful than others, where your typical attack strategy will be improved depending on certain supers. And while there is a place for each of them, as you can only use one of them per week, your best option is to stick to the best.

Here are the five best Super Troops in Clash of Clans.

If you’re someone that prefers ground strategies and looking for the most effective way to breach walls, you need wall breakers. They clear them away with relative ease, but the problem with regular wall breakers is that they are squishy, meaning their effect is lost if you can’t keep them away from damage.

The Super Wall Breaker is the clear solution, providing an upgrade that makes defending against them incredibly difficult. The density and strength of the enemy walls can be the biggest difference between struggling with your army being killed off early, and breaching a base and taking that important star for a win.

These super troops have more health, are faster, and come with the ability to cause an explosion regardless of their fate. This means that if they don’t reach a wall before being killed but get within touching distance, they will still blow up and cause wall damage. If they do hit the wall, not only will they do standard damage, but the ability will also go off. At the top level, the Super Wall Breaker will destroy any wall at any level, and if set close enough to other buildings, it can help take them out too.

They can still be affected by spring traps, but their ability will still go off, and you will still want to pair it with something to take the heat off it like the standard Wall Breaker, such as a giant or golem.

If you’re currently in the midst of a resource crisis and need to farm resources, investing in the sneaky goblin is an excellent choice. Not only do they have higher base health and attack power, which in turn is powered up by double when attacking resources, but their Cloak ability gives them stealth for five seconds from the time that they are placed.

This might not sound like much, but if you hold off on deploying them until your main army has opened up a few of the walls around the base, or if you’ve managed to create a path with which to funnel them through to the middle of the village, they can be devastating to the opponents resources, which you will often find holed up in the center.

As Goblins target and do extra damage to both the clan castle and the town hall as they count as resource buildings, they will help with resource looting and pick up those vital stars for trophies. You can use siege equipment to get in close or simply funnel them in and watch as they decimate the town hall in seconds.

They are less useful when it comes to helping with trophies because unless all resource buildings are down, they won’t go near the defenses. They are also still not very beefy either, so will die fairly quickly if not protected. But if you’ve just finished spending all of your resources on upgrades and are waiting for them to finish, they will make for a fantastic choice to help with stocking backup in time for the next round of upgrades.

One of the most recent additions to the super troop line-up, the Super Valkyrie, is similar to the regular Valkyrie in her uses when it comes to standard attacks. If your opponent has a compact village with lots of close by buildings, she can do massive damage to all of them. When facing bases with a wider spread, her strength is somewhat mitigated even if she is one of the game’s faster-moving troops.

However, the Super Valkyrie, on top of the standard buffs to health and damage, has the added benefit of holding onto a rage spell as she charges in. Upon death, she drops it on the floor, and it acts as a standard rage spell, providing a huge boost to speed and power for all units within its range.

Without this added effect, the super version is not worth taking over the other super troops, but if you’re predominantly a ground attacker, the added rage spell adds massive value for the fact that you won’t need to invest as much in independent rage spells.

The Super Valkyrie can instead be used to help push your army closer to your target building, with room for extra healing or freeze spells. With her higher base speed, she can usually move into the space that the rest of your army is heading to before dropping the rage on death, meaning they receive the full benefit of the rage.

The second of the latest super troops, the Super Minion, is a fantastic addition for the fact that its ability, where it can fire its first five shots at a much bigger range, is good enough to cause a huge momentum shift if you are struggling with your opponent’s bigger defenses.

The range is far enough that if you have a clear shot of the enemy inferno towers or eagle artillery from range, and will have enough firepower to take them out of the equation before your units need to move in closer.

A video post from Reddit user Chief Worraworraworraworra demonstrates how you can use a single Super Minion under the influence of a rage spell to destroy an upgraded Inferno Tower before it does any significant damage to the minion. This then allows the more tanky ground troops to soak up the lesser defenses without worrying that an inferno tower will shrink it fast.

With minions proving to be good secondary troops in airborne tactics, the super minion can prove extremely helpful in pushing for trophies, though unlike standard minions, they can be affected by air seeking missiles.

At the levels that you unlock the super troops, standard barbarians begin to see their usefulness fade. They simply don’t possess enough flexibility for them to continue being played at higher town hall levels.

Enter the Super Barbarian, who starts with rage and can obliterate buildings quickly while also being a bulky unit. As they don’t take up a large amount of housing space to use either, you can bulk out your army with them and use them as your main support outlet.

Making them the centerpiece of your attack is unlikely to wield the best results for getting a star, but with them behind valkyries, golems, and bowlers, they can take away a lot of the attention on the squishy units while providing good damage, especially while in their rage state.