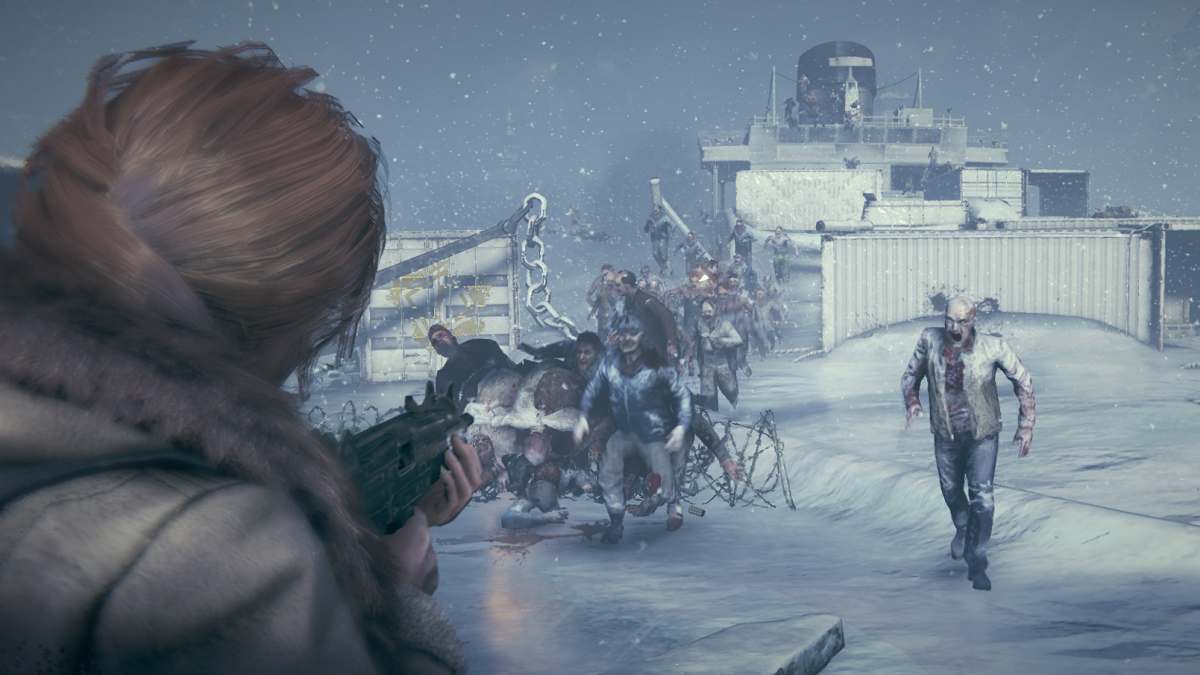 Besides adding new maps and features, the main way Aftermath refreshed the gameplay of World War Z was by introducing a new playable class and a new melee combat system that gives all classes new ways to fight the zombie swarm. By picking a different weapon or a different set of perks, returning players may find their playstyle completely change. In this guide, we will go over the best ranged and melee weapons you could pick up with each class in World War Z: Aftermath.

The Hailstorm MGL is the Hellraiser’s signature weapon in World War Z: Aftermath, and you should pick it up any time you find it to take advantage of its perks. Fire-based weapons and explosives are also recommended since the Hellraiser’s kit allows them to take reduced explosive damage and dish it out in spades.

More so than other World War Z: Aftermath classes, Gunslingers can take advantage of the Dual Knives’ passive, which increases firearms damage by 25% for 3 seconds following a melee kill. If you are close to enemies, make sure to pop out your Knives for a quick kill before getting right back to blasting.

You can use any ranged weapon in World War Z: Aftermath effectively as a Gunslinger, though you should naturally search for MAG5 Machineguns if you have picked the Heavy Metal perk.

The Slasher is the dedicated melee class in World War Z: Aftermath, and as such, it has no synergies with firearms. That said, you would be wasting your time with long-range guns as a Slasher, so avoid taking things like the Battle Rifle or Scout Rifle.

For melee, your best options are the Wakizashi (which has excellent cleave and deals massive damage around you when getting incapacitated) or the Dual Cleavers (which fully restore your melee stamina after you kill five zombies in quick succession).

Exterminators in World War Z: Aftermath have access to the excellent Wheatgrass perk which increases HP by 25%, making the Dual Sickles the perfect melee weapon pick. Sickles also have a stronger than average cleave, which compounds the Exterminator’s passive damage bonus when surrounded by multiple zombies.

If for some reason you just can’t get behind using farming equipment in the zombie apocalypse, your second best bet for melee weapons is the Hammer. As an Exterminator you automatically get the Bandolier perk level 10 which increases the durability of all defensive structures by 25%, creating a nice synergy with the Hammer’s passive repair ability.

Moving on to firearms, there are no bad choices you can make because Exterminators have passive damage and reload speed buffs for all weapon types.

As the support classes in World War Z: Aftermath, the Fixer and Medic bring a lot value to their team through their equipment. For that reason, Fixer players should bring along the Lobo as their melee weapon of choice (every zombie killed with this shovel has a 5% to drop an equipment bag), and Medics should always take the Fire Axe (same deal, except with medkits). For the Fixer’s ranged weapon, we recommend either the Sporting Carbine or the Battle Rifle, which both work well with the class’ passive ammo capacity buff and semi-auto perks in the seventh column.

The newest class in World War Z: Aftermath is all about staying close and personal with the horde and disrupting zombie waves through devastating charges. To suit this playstyle, the best weapons for Vanguard players are the Sledgehammer (which pushes zombies further back with signature strikes) and the Compact Shotgun. The Vanguard’s primary weapon should be a second shotgun or an SMG. Vanguards who like to rely on the Sledgehammer to keep the swarms at bay should take the Adrenaline Rush perk, which fully restores melee stamina after a Shield charge.

The Dronemaster is the only World War Z: Aftermath class that doesn’t have innate synergies with certain weapons, because their entire kit revolves around using Quadrocopter drones. You can focus on using Bullpup Rifles to get the benefits of the Burst Pro perk, but otherwise, feel free to use any firearm or melee weapon when playing as a Dronemaster in World War Z: Aftermath.