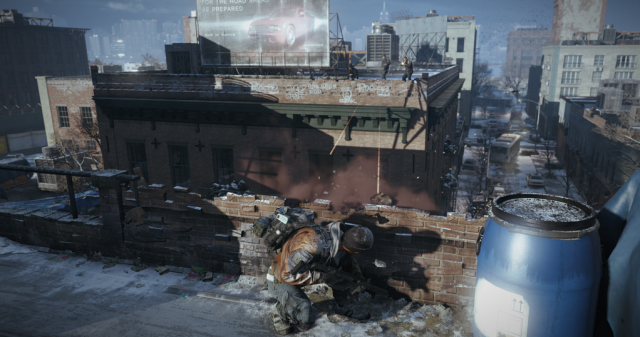 Resistance is a new PvE focused game mode that was added to The Division as part of Massive’s 1.8 Update in late 2017. The game mode requires players, who may be grouped up for this activity, to survive an onslaught of enemy waves. Each wave increases in difficulty as the enemies get tougher and new challenges are added as agents try to survive.

While the 1.7 update catered to PvP players, Resistance is entirely optimized for those agents that like to take on the AI. Agents will take on a united front made up of all the game’s enemy factions. They’ve banded together to try and overwhelm the player. Throughout three different maps in the new West Side Piers district, players will have to fight to survive.

The game mode will scale based on the number of players in the group, ranging from one to four. Players must be level 30 to participate. During each wave, players will earn a currency called SHD-Tech, which can be used to purchase ammo or health packs, fortifications, unlock doors that lead to more areas and loot, as well as deploy devices to assist agents in their fight.

At the time of this guide, there are three Resistance maps available. They are all located in the new West Side Piers area and can be fast-traveled to. Starting an activity is the same as any other mission in The Division as players simply need to enter the area to kick off the event. Matchmaking is also available and highly recommended if you intend to make it far into the action.

As the name implies, this map is located on and inside the carrier that we’ve all been wanting to explore. Unfortunately, we don’t get to stroll around and enjoy its size and beauty, instead we have to stay on our toes as the combat on this map hits you fast and furious.

Pier 93 starts you off inside a tiny warehouse and then soon takes you outside onto a dock littered with containers and the type of machinery you’d expect on a pier. It’s busy here and it’s easy to get caught in a bad spot, so keep your head up and coordinate with your team what the plan is at the various stages of Resistance.

Powerhouse is not for the claustrophobic. Don’t let the relatively small size of the map fool you, this map is a maze of sewer tunnels and it’s easy to get overrun or just plain lost. Again, communication and coordination are the key to success.

There are a total of 15 waves in the Resistance mode. After that, it does just keep going, but the first 15 are fairly structured. The waves ease you into the game mode but things get hairy pretty quickly after the first few waves. You get only 20 seconds between each wave to catch your breath and regroup.

Most waves will feature a “Danger” component that aims to make life difficult for agents. This can range from simple EMP disruptions and offline SHD Interacts to contamination that slowly drains agents’ health, to drones that show up to peck away at you from the sky.

During wave 4 and 8, agents will have to perform a task, known as “Stop Data Breach”. This is a time-limited task during which agents must secure a laptop in a specific location by staying near it. Fail to secure it in time and you lose. In fact, wipe at any stage and you lose. There are no checkpoints here.

Every fifth wave will feature a boss fight. At this time, the united factions will do their best to kill you by sending one of their biggest and baddest opponents. Kill them in 4 minutes or fail. They will drop loot that you get to keep.

You will have to contend with the following:

These danger modifiers make your life more difficult in most of the waves in Resistance. You will be notified of what hazard is coming up before each wave and you can expect the following hazards:

Each map has various doors that can be unlocked by spending SHD-Tech currency on them. You don’t have to cover the entire amount needed, as partial deposits will also work. Players can collaborate and each contribute SHD-Tech until there is enough to unlock the door. Behind each door you can expect more doors, fortifications, or rewards. The icons on the door will give you an indication of what is in the next area.

It is highly recommended that agents coordinate on a plan before entering a Resistance map of which doors to unlock and when, otherwise the highly valuable SHD-Tech can be wasted.

Fortifications are placed in various parts of each map and function similarly to how they did in the Last Stand DLC. They must be purchased with SHD-Tech for 500 each and can be upgraded and repaired. There are three fortifications available:

Throughout the maps you will find caches for the purposes of restocking or gaining loot. There are restock caches that contain everything from ammo, grenades, food and drinks, to exotic ammo, and medkits.

The most expensive door on each map will block access to a Reward Cache that contains a guaranteed exotic item. This will require a large amount of SHD-Tech currency and progress across the map itself.

You will also receive rewards as you play. Bosses will drop loot and Resistance Caches of tiers going up to 5 will drop. The higher the tier, the better the contents.

This should set you up to give Resistance a try, agent. It’s not a forgiving game mode, but it’s one that is perfectly geared towards the PvE player and will test even the best agents’ skills. For more guide for The Division be sure to visit our Guide Hub.