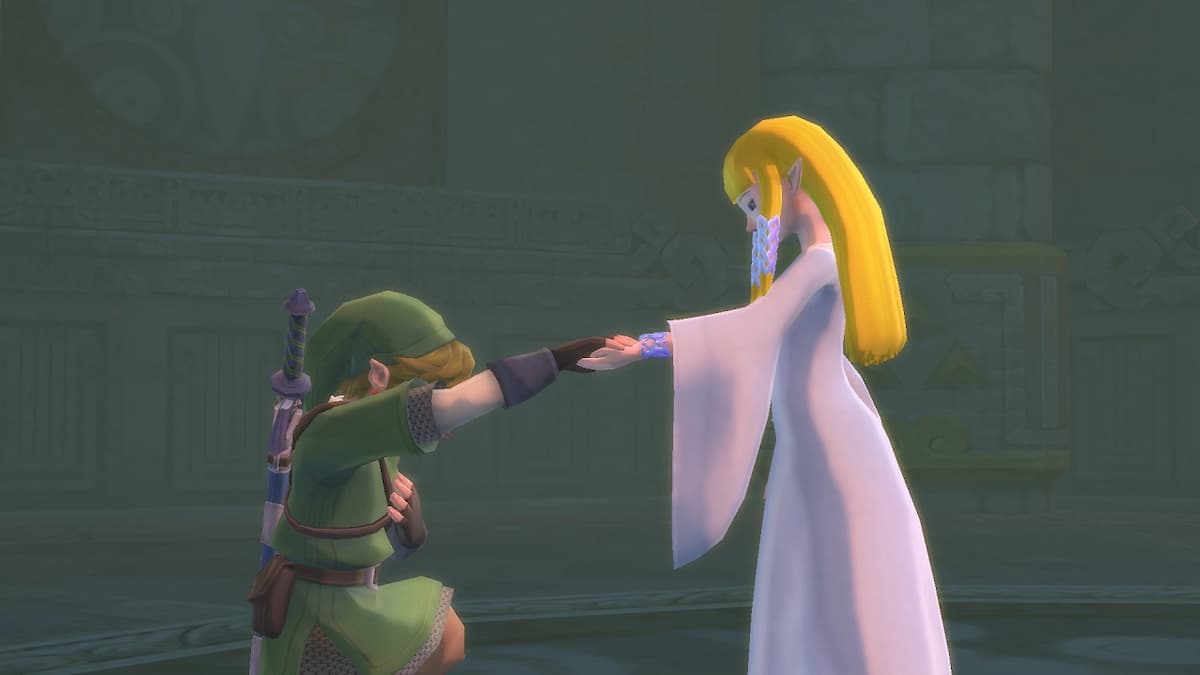 The Legend of Zelda series is one of the most celebrated and iconic game franchises of all time. When the first game was released in 1986, few could have guessed that it would still be going strong more than 35 years later. However, with 18 games in the main franchise so far, fans who want to experience The Legend of Zelda in chronological order have three separate timelines to sort out. If you want to play The Legend of Zelda games in order, here is the best way to do so.

The Legend of Zelda series has three distinct timelines that encompass every game in the main franchise. These timelines split from Ocarina of Time, which is fitting since the title made heavy use of paradox-inducing time travel. Though it is established that Ganon — or Ganondorf, depending on the game and the form he is taking — is always the same reincarnated spirit in each game, it is always a different Link and Zelda in each title unless it is a direct sequel. Most of this information comes from the Hyrule Historia, which was released in 2011.

There are several games in the early history of Hyrule, which establish how the kingdom was founded and how recurring elements in The Legend of Zelda came to be.

The very first title in The Legend of Zelda is one of the more recent. Skyward Sword for the Wii and its remaster for the Switch offered fans the chance to take to the skies with Link and Zelda before the kingdom of Hyrule even existed. While much of the imagery is familiar to fans, including Link’s green tunic and hat, this game serves to establish the origin of the Demise Cycle, which explains why Ganon returns to fight the reincarnations of this game’s Link and Zelda multiple times throughout history.

While Skyward Sword establishes the origins of Ganon several hundred years before his birth, The Minish Cap for the Game Boy Advance is the first game in the Zelda timeline to take place within an established Hyrule. The game functions to establish the Four Sword which would become a key item in later games in the franchise. It also marks the first appearance of Vaati, who would become a recurring villain in the franchise.

This multiplayer title for the Game Boy Advance takes place sometime after the events in The Minish Cap. In it, the previous villain Vaati has become a monstrous, chaotic figure. The Four Sword has split Link into four distinct people and he has to work together with the various versions of himself to rescue Zelda and seal away both Vaati and Ganon, who shows up at the end to reveal that he has been manipulating things behind the scenes.

Though it is often cited as one of the best games in the franchise, Ocarina of Time for the Nintendo 64 is the reason the timeline in The Legend of Zelda series is so complicated. The game shows the first chronological appearance of Ganondorf, the human incarnation of Ganon. At the end of the game, Zelda uses the power of the Triforce to send Link back in time to warn her past self about the danger that Ganondorf poses. This seemingly clever act had unexpected consequences for the fabric of time itself, resulting in three separate timelines being established.

The games that take place in this timeline are a result of Link failing to defeat Ganon at the end of Ocarina of Time. Ganon steals the other two pieces of the Triforce, corrupting it and turning the Sacred Realm into the Dark World. Essentially, every time the player got a game over in that game, it resulted in this timeline being established.

A Link to the Past

This game gave us many of the elements that would become standard in the Legend of Zelda series, including the famous Master Sword itself. A Link to the Past for the Super Nintendo — it is also available via the Switch Online — is the first game in the timeline where Ganon has been sealed away in the Dark World for hundreds of years. His attempts to escape and take over the Light World are thwarted by Link and Zelda.

One of the few direct sequels in the franchise, Link’s Awakening takes place shortly after the defeat of Ganon in A Link to the Past. Originally released for the Game Boy, it has also been remade for the Switch in recent years. This game, while well-loved among fans, doesn’t advance the lore of the franchise greatly, though it does include a strange and eclectic cast of characters.

This pair of games for the Game Boy Color function as two halves of the same game which featured the same Link as A Link to the Past and Link’s Awakening. The intent was for players to complete one before transferring their save file to the other game to unlock the true ending. It was a strange gimmick at the time, but it has resulted in the game becoming one of the most valuable retro video games on the market.

A Link Between Worlds

A Link Between Worlds was viewed as a spiritual successor to A Link to the Past. Released for the 3DS, the game offered a return of the Light and Dark Worlds from A Link to the Past, though it takes place several hundred years later. This game saw the introduction of Lorule, a reversed version of Hyrule where characters were both similar and very different.

This 3DS title was a direct sequel to A Link Between Worlds and featured the same Link as in the previous title. In it, he travels to the kingdom of Hytopia where he rescues Princess Styla from an evil witch. There is very little connecting the two games, but it takes place directly after A Link Between Worlds.

The Legend of Zelda

We finally arrive at the first game in the franchise. The Legend of Zelda takes place surprisingly late in the timeline, with Hyrule having fallen following the Golden Age brought about by the events of Link Between Worlds. Here, a brand new Link takes on the task of collecting the Triforce of Wisdom and defeating Ganon in a Hyrule that is mostly bereft of life and people.

Zelda II: The Adventure of Link

One of the most misunderstood entries in The Legend of Zelda franchise was the series’ first direct sequel. Zelda II took the series in a radical new direction, introducing side-scrolling combat and RPG elements to the game. In it, the servants of Ganon seek to revive their dark master by offering a blood sacrifice from the one who defeated them. This game for the NES rounds off the Hero Fails Timeline in The Legend of Zelda.

The Legend of Zelda timeline splits again in the eventual future where Link defeats Ganon and saves the Kingdom of Hyrule. After Zelda sends Link back to his younger body following the events of Ocarina of Time, he finds her younger self to warn her of what is to come. The two manage to beat Ganondorf before his evil plans are set into motion and stop the events of Ocarina of Time from ever happening. This causes a split in the timeline to occur.

The Child Era Timeline starts off with Majora’s Mask for the Nintendo 64. The game offers a much darker tone than its predecessor and sees Link, in his child form, searching for Navi after her departure in the final cutscene of Ocarina of Time. It doesn’t establish much in the series’ lore or history, but it does offer a fantastic exploration of the inevitability of death and mourning.

Several hundred years after the events of Majora’s Mask, Twilight Princess for the Wii explores what happened when the Sages attempted to kill Ganondorf after Child Link’s arrival in this new timeline. Instead of dying, he was sent to the Twilight Realm. This brought about the timeline where Midna recruits Link to her side and the pair set out to save Hyrule together in one of the best and most mature entries in the franchise.

Another time skip of several hundred years takes place and Four Swords Adventures for the GameCube sees Link once again split into four different versions of himself. Vaati is back as the initial antagonist of the game, though quickly it is revealed that Ganon has, once again, been controlling things from the shadows in this final entry in the Child Era Timeline.

When Zelda returned Link to his younger body, she effectively took away the Hero of Time from the timeline. This meant that, when Ganon inevitably showed up again, there wasn’t a hero to stand up to him. He quickly amassed his power and strength until the gods were forced to flood the world to prevent him from taking over completely. The result was a new timeline that included a trio of games with a similar look and feel.

One of the greatest Zelda games of all time, The Wind Waker for the GameCube is the first game in the Adult Era Timeline. This entry is unique in that Link here is not considered a reincarnation of the Hero of Time but just a regular kid out to save his sister. Because of the new timeline, several elements are absent from this game. Most notably, Hyrule and the Master Sword are nowhere to be seen. Everything that came before has been washed away by the great flood.

Directly after the events of The Wind Waker, Phantom Hourglass gives us more time with this new Link as he sets off to found a new Hyrule Kingdom. Released originally for the DS, this game used the handheld console’s new features, such as the folding screen and microphone, to set up new puzzles for the player to solve. The game’s repetitive dungeons stopped it from being widely loved, but there is plenty of charm and fun to be had in it.

The final game in the Adult Era Timeline, Spirit Tracks was released for the DS and starts with the murder of Princess Zelda. To save the kingdom of New Hyrule that was established several hundred years before at the end of Phantom Hourglass, Link must master the steam engine and deal with the very pushy ghost of Zelda that accompanies him on his adventures. This game feels like a new era in the Legend of Zelda franchise, rebuilding something new after the old was effectively washed away and capping off the Adult Era Timeline.

At the far end of the Legend of Zelda timelines is the Calamity Era. Officially started with Breath of the Wild, this period takes place in the distant future of all the other timelines.

Breath of the Wild

The final game in the Legend of Zelda timeline is Breath of the Wild for the Switch. However, it is important to note that it hasn’t been established which timeline it follows. Instead, there are references to all three timelines within the imagery and themes of Breath of the Wild, suggesting that it takes place at a time after the other timelines have been joined together somehow. Both it and the upcoming sequel seem to deal with the end of the Demise Cycle that started in Skyward Sword.

How to play The Legend of Zelda games in release order

Of course, if you want to play the games as they came out, you want to tackle them in an entirely different order. Because most are standalone experiences, you don’t lose anything by popping back and forth through the various timelines in the series.