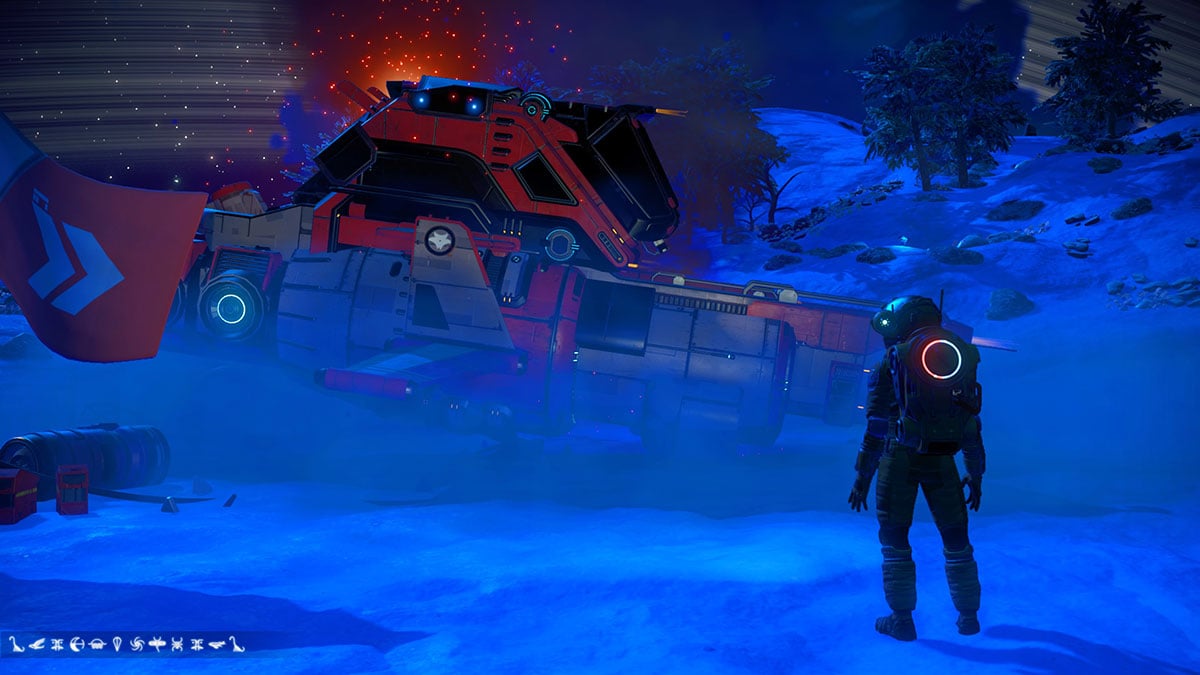 No Man’s Sky’s universe is littered with stuff for players to find, from crashed Freighters and abandoned buildings to aliens who have lost their way whilst traversing the galaxy. In this guide, we’ve pulled together the best tips for finding one of the best pieces of space trash in the game, crashed ships.

How to find crashed ships

Crashed ships are a lot more common than you might think, but they appear as frequently as London busses. They’ll be scattered all over planets when you’re not looking for them, but as soon as you are, they’re nowhere to be seen. You can find crashed ships on the surface of any planet or moon. You just need to look hard enough. However, there are a few methods you can use to help you locate any that are nearby.

You can purchase a map from the local space station. You’ll need to specifically purchase a map detailing a distress beacon since this is what the crashed ship will be broadcasting. However, these aren’t guaranteed to send you to a crashed ship. In fact, they’ll most commonly send you to an abandoned building. Purchase at least ten if you’re set on finding a crashed ship, but do consider that even with this many, you might need to come back and buy more until you find a ship.

Flying across the surface of any planet and scanning near constantly will eventually reveal the location of a Transmission Tower. If you land at this location and interact with it, you’ll be able to see all the distress beacons in the region. One of these is bound to be a crashed ship, and all you need to do then is fly to it. Finding these structures can be tricky, but you’ll come across one at some point if you persevere enough.

You can stumble across a crashed ship by flying over a planet or moon’s surface. Keep scanning as you fly, and look out for the red dots on your radar. These are distress beacons, and if you see one, you should fly to it. This is one of the most reliable ways to find a crashed ship and should help you in your quest better than some of the other tips on this list.

Give an NPC a gift

This method is slightly trickier depending on what your understanding of each alien language is. Each system has a dominant race, and if you speak to a member of the dominant race in that system’s space station, they will have a little chat with you. At some point, you’ll have the option to give the NPC a gift. If you give them one, they’ll give you the location of any local distress beacons, some of which will be crashed ships. If you can’t understand a word they’re saying, this is much more complicated, and you may have to guess as to what to do. If you fail, you’ll need to travel to a different system and repeat the process.

By piloting the Nautilan Exocraft in any oceans you find, you can scan for crashed ships. This has proven to help players find more crashed ships, but there’s no way to recover them. Instead, you can claim a small reward, but the ship will remain at the bottom of the body of water.

One of the best methods for locating crashed ships is by finding a Void Egg. You can pick this up by following the Starbirth mission, but you’ll also pick them up by scanning for transmissions in space. The Void Egg will lead you to a crashed ship site for a living ship, which is quite different from a standard starship.

What are crashed ships?

Crashed ships are just that, starships like your own that have crashed into a planet or moon and been left to rot. If you come across them, you’ll be able to repair them by using resources to fix up all the broken systems, which vary from ship to ship. Once you’ve repaired a ship, you can use it for yourself or sell it for a tidy profit at a space station.

Why should you find crashed ships?

Finding crashed ships is one of the only ways to get a better starship in No Man’s Sky. There are several classes, and each can be equipped with new or better systems than your current ship. If you want to warp through systems faster or beat pirates at their own game, then picking up a new ship is a great way to boost your speed, providing it’s a better class of ship. Alternatively, you can sell any crashed ships that you restore.