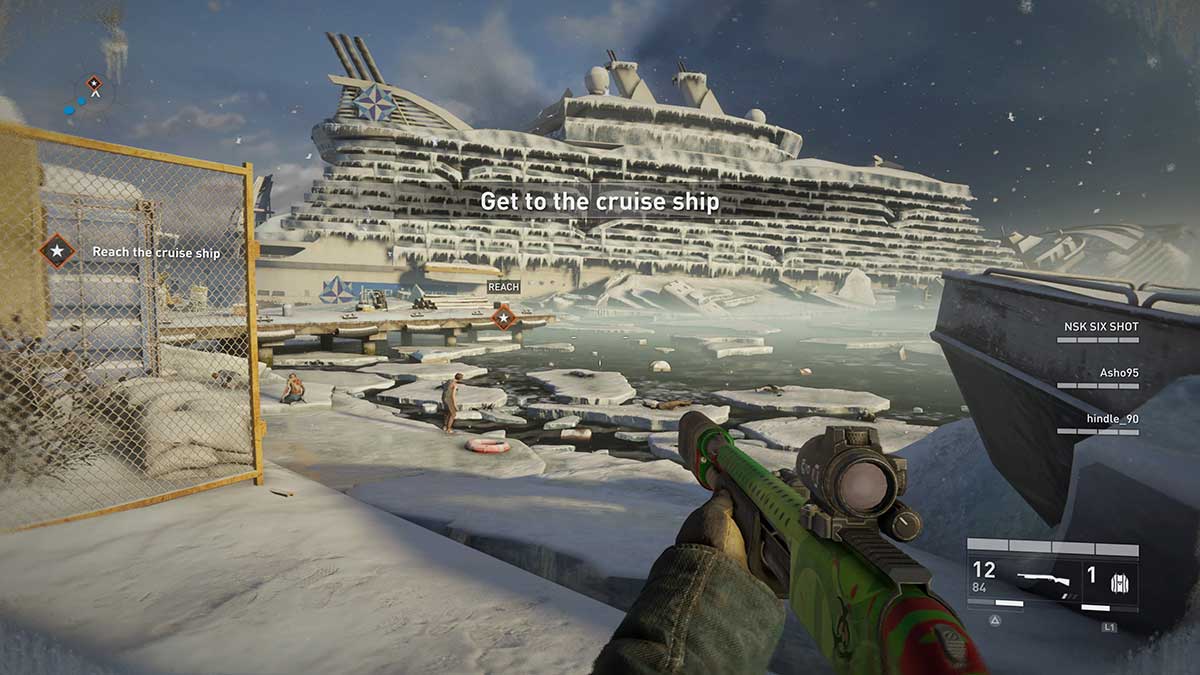 Dead of Winter is the first Chapter in World War Z: Aftermath Episode 7: Kamchatka. It’s the first time you’ll encounter a new enemy added with this expansion and where you’ll storm a cruise ship in search of supplies to survive the coming winter nights. This guide covers how to complete the mission and includes some tips to help you along the way.

Step 1: Reach and defend the Russians

The mission opens on some incredible scenery. You need to follow the path ahead and work your way through a series of buildings until you reach a group of Russians. There’s not much to look at along the way, but you should still keep an eye out for equipment and weapons while you run.

When you do finally reach the Russians, you need to defend them from a couple of swarms. Set up all of the defenses you can find and stock up on ammo. These swarms come in fast, and the encounter feels incredibly claustrophobic. Fight as a unit and defend each other because you won’t survive if one of you falls. You also need to keep the Zekes away from the Russians because they can become overwhelmed, and the mission will end if they die.

Step 2: Fight through the cruise ship

Your next job is to get inside the cruise ship and battle your way through to the top deck. To do this, you need to get inside the cruise ship by picking up the flamethrower and then finding its fuel. The fuel will be off to the left of the cruise ship amongst some Zekes. You can use it to melt the ice blocking the door into the ship when you have it. At this point, you may encounter a new enemy, Rats. At the time of writing, Rats are invincible to all weapons except the flamethrower, so if you see some, you may have to wipe and restart. To get around them, use one player as bait while the others run ahead and get away from the Rats.

Inside the ship, you’ll be looking for a way to get up to the top deck. The stairs are out, but if you can find two fuel canisters, then you can turn on the elevator. The fuel’s location is randomized, so search the ship until you find it, then add the fuel to the generator. Each time you do, more Zekes will pile into the area. This includes a lot of special Zekes that will make your life extremely difficult. Work together as a team and don’t split up here. Otherwise, you’ll make this mission much more of a challenge.

Before the elevator starts, you need to hit two switches within a 30-second timer. This is pretty easy, but there are yet more Zekes that jump in to make your life a misery here too. Once you’ve hit the switches, run back to the elevator. The Zekes will keep on coming, so don’t pause. Next, you all need to get inside the elevator to trigger it to move to the top deck. We experienced an issue where one player was too far forward but still inside the elevator, so make sure you move to the back and don’t hold the team up.

The final encounter is your second defensive one. Look around for defensive items because there are a lot of them dotted around the deck. Set them up quickly because the swarms will start coming much after than usual. You need to fight back against the Zekes while the Russians get the stuff they need from the ship. This means that you’ll have to fire into the undead as usual, but also think about poor Dmitriy. The Zekes can swarm Dmitriy’s location, and you need to keep them away from him when they do, or the mission will fail. Fight back two waves and wait for the Russians to finish, then run into the elevator again to end the mission.