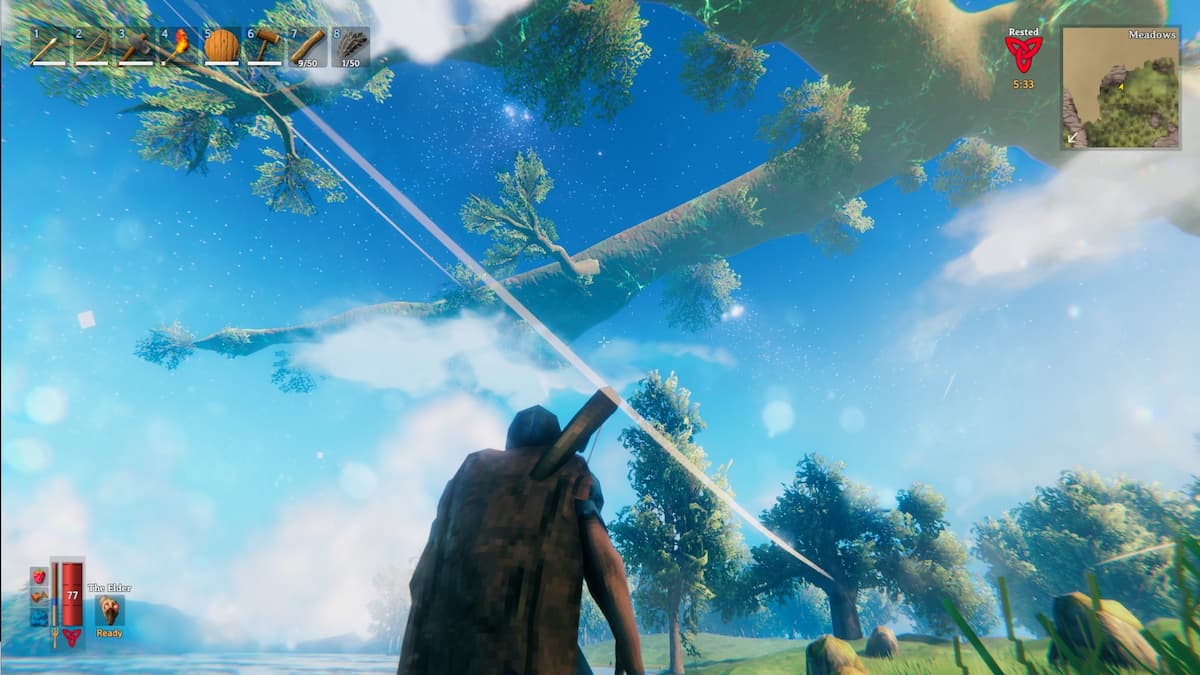 Valheim features a massive world where there are plenty of creatures wandering around, and many of them are going to be aggressive towards you, making your stay there that much more difficult. If the monsters won’t be the end of you, the harsh weather will be. The primary quest you need you’re given features you defeating various bosses, known as the Forsaken, but you don’t have to do this immediately. Before that, your primary focus will be to survive, and there are several ways you can do this to make your time in Valheim that much easier.

You do not need to reinvent the wheel to survive Valheim. The best way to start is to find a flat piece of land in the Meadows region, put down a workbench, put up some walls, and craft a bed. You can do all of this by crafting a hammer and harvesting the nearby trees for wood. With a few protective walls around you and a comfortable bed, you’ll be able to rest when darkness falls. At night the more aggressive creatures, and harsh cold, arrive.

If you want to use your workbench to craft basic armor and tools, you need to create a roof. We recommend creating a two-story building with some shingles to protect yourself from the elements. You need to place a campfire inside your house to warm your residence and allow you to sleep at night. But if you don’t have a way for the smoke to pour out, it’ll damage you while you’re inside the building, so developing a chimney or window to let that out would be advised.

After you’ve settled in by giving yourself a bed and a home, it’s time to go hunting. There are three primary sources of meat when you first start: boars, deer, and necks. The necks are small, reptile-like creatures. When they die, they drop their tails on the ground that you can cook. The boars, when you get too close, dash at you and become aggressive. While you can tame them, it can take quite a bit of time, so we recommend killing them outright and harvesting them for meat and leather scraps. Deer are the most skittish. They run away from you when you draw near, so you need to use a bow or a flint spear to kill them from a distance.

Alternatively, there are also mushrooms, raspberries, and blueberries you can harvest from the ground to fill your stomach bar. They do not fill you up as much as meat, but they’re good in a pinch.

You can only eat three things at a time. Each item you eat gives you an additional amount of health and increases your stamina bar, so having plenty of food early and making it accessible is extremely recommended. The food currently in your stomach are listed to the left of your health bar, on the bottom left of the screen.

You cannot stack the same food items, so you cannot eat two of the same type of meat back to back, but you can one neck tail meat and one regular meat. You can have one bar of raspberries and one of the blueberries, but not two blueberries. While meat will give you the largest health and stamina bonuses, berries and mushrooms are a great way to even out your stomach bar.

Chests are a great item to make early on inside of your home. You only have your starting inventory space, and it fills up pretty fast. If your maximum weight exceeds 300, you’ll become encumbered, preventing your stamina from regenerating, and you’ll barely move. We cannot recommend enough creating four or five chests early on and hoarding your resources inside them. Slap your wood, your stone, your flint, and all of the other resources you don’t plan to use while you’re wandering around.

On that note, wood is beneficial. You need it for basically everything you do in Valheim when you start, so it doesn’t hurt to spend an entire day in the game chopping down trees. You’ll use all of it pretty often and may even find yourself constantly stopping a task to harvest more wood, making it an annoying chore. Having a lot of it early on is extremely helpful.

The first boss of the game is Eikthyr. You’ll receive its position when you learn it from the runestone where you initially started the game. After you’ve created a home, gathered up some food, and have plenty of resources, go out and take on the Eikthyr. They’re not too difficult of an encounter. You need to have at least two deer trophies to summon them at their altar, and when they appear, they’ll be in the form of a large elk with lightning antlers. We recommend fighting them from a distance with a bow or throwing spears at them.

Once they’re defeated, they’ll drop their Forsaken trophy that you take back to the circle at the start of the game and hardened antlers. When you pick up hardened antlers, you’ll learn how to create an antler pickaxe, and you can use that pickaxe to harvest copper and tin. Those are great starting resources that are the stepping stone to creating bronze weapons, armor, and tools. You don’t need to rush to bronze weapons, but having the pickaxe now makes your life a lot easier later in Valheim.

Valheim is massive. It’s a big game with plenty of endless lands for you to explore. Because it’s so big, we highly recommend finding some abandoned ruins and houses and setting up shop there. You can slap a workbench down, a bed, fix up the roof and the walls, and designate it as an outpost. It doesn’t have to have everything that your actual home has, but it’s a good way to encourage exploration, and you won’t find yourself making it a certain distance before having to run back to your home to sleep, right before darkness arrives. Eventually, you’ll learn how to create portals, and you can set these up to connect to one at your main base, making fast travel a reality.

While you’re exploring, you’ll probably encounter dungeons and troll caves you want to explore, but you’re not ready to yet. To make sure you don’t forget that place, open up your map by hitting the ‘m’ key and choosing one of the bottom right icons. Click that, and then double click the location on the map, and you’ll always have it marked moving forward. There doesn’t appear to be any limits to how many pins you can have on your map, so put nail them down everywhere.