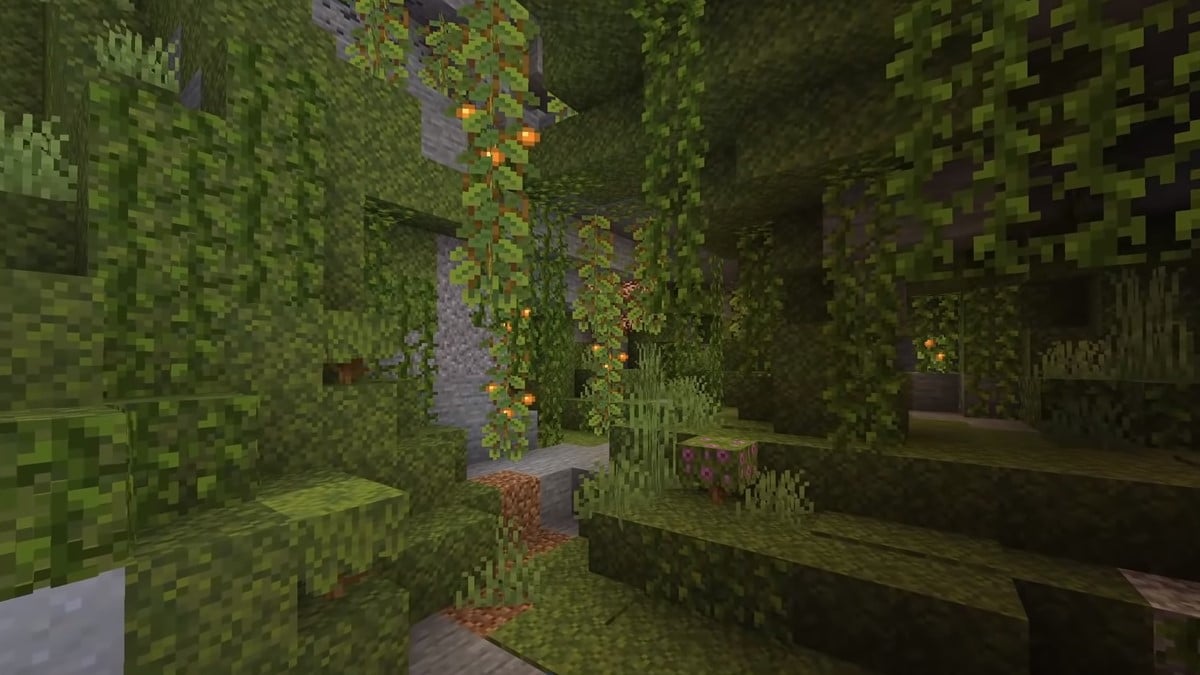 One of the major changes coming to Minecraft in the Caves & Cliffs update is new updates to world generation. Whether is the revamps to the Mountains, or the Deep Dark home of the Warden, the world is going to look quite a bit different. The most talked-about change by far though is the brand-new addition of a cave type called the Lush Caves. Unlike the barren rocky crags an experienced miner is used to, Lush Caves will be full of life, greenery, light and water.

Within a Lush Cave, you can find vines, grass, dirt, and most excitingly, Spore Plants. Spore Plants are a new plant type that doubles as a light source and triples as a food source. The plants grow from the ceiling and generate light, while also growing a new type of food called glow berries. When picked, they can be used as a food source the same type of way that you can use Sweet Berries from the Taiga biomes. There are also the related Spore Blossoms, which do not grow berries but can rain down particles when open.

While this last new plant isn’t in the cave itself, it is a signifier that there will be Lush Caves below. On the surface of the overworld, you will see a new type of tree called the Acacia Tree. All that we currently know about it is that there are purple growths within the leaves. Whether they are just a marker for Lush Cave locations or if they can be harvested for anything remains to be seen.

There is also passive mob generation in the Lush Caves. It is possible to find the new Glow Squid within the water of a lush cave, and there is even a new passive mob that only generates naturally within the Lush Cave’s waters: the Axolotl. It comes in five different colors: pink, brown, white, yellow, and green. While you may just want to leave them to their natural habitat, you can also take them back home with you and fight against underwater hostile mobs together with them by your side.