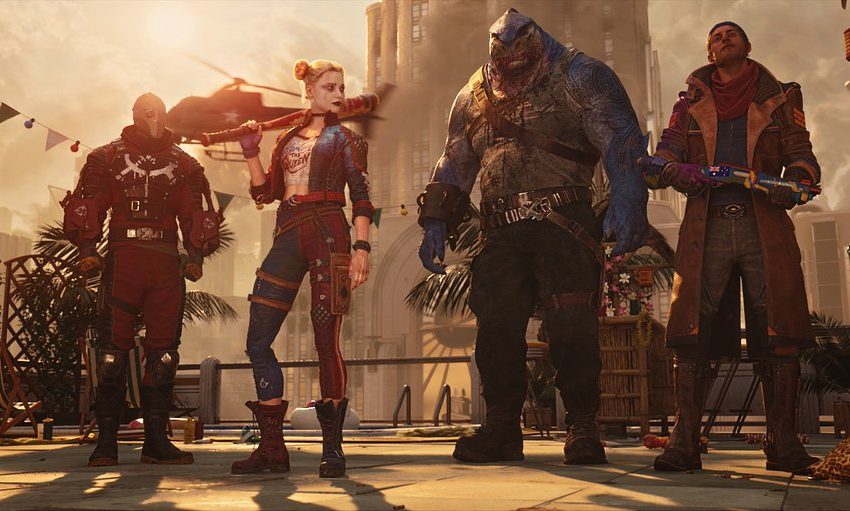 Suicide Squad: Kill the Justice League is Rocksteady’s upcoming game featuring a group of DC’s most prominent villains joining and hunting down the Justice League under Amanda Waller’s command. Following our first look at the game at DC FanDome 2020, we have a better idea of who we will be able to play in the game, at least at launch.

Each character has a specific set of skills suited to their abilities for combat and traversal in the open world of Metropolis. Here are all the characters we know about (both playable and non-playable) in Suicide Squad: Kill the Justice League.

Harley Quinn is front and center of the Suicide Squad yet again as one of the four playable characters. She is wielding her particular baseball bat as usual and is once again voiced by Tara Strong. In the reveal trailer, she is seen swinging across the city with a grapple gun that seems to act differently than Batman’s in the Arkham games.

Harley Quinn is one of Batman’s most recognizable villains, making her debut in the 1990s Batman: The Animated Series show. She is featured in both Suicide Squad movies, the Birds of Prey movie, her own animated show, and is usually shown right next to the Joker. However, she has recently been given more opportunities on her own.

Captain Boomerang, one of the Flash’s biggest villains, is playable as well. From what we have seen from the trailer, he speeds off to wherever he throws his special boomerangs and carries a pistol. We speculate the boomerang will be how you get to higher places quickly.

Captain Boomerang appears in both Suicide Squad movies, The CW’s Arrowverse, and various animated films. He made his debut in The Flash #117 in December 1960.

Deadshot is the man that never misses a shot. As you would imagine from his past iterations, he will be kitted out with a small armory of firearms, including a rifle and wrist-mounted guns, but we also see him flying around with a jetpack in the trailer.

Deadshot was portrayed by Will Smith in the first Suicide Squad movie and has appeared in Batman: Arkham City, Batman: Arkham Origins, and Injustice: Gods Among Us. His debut came in Batman #59, June 1950.

King Shark is a demigod humanoid shark and rightful ruler of the seas. Being such a prominent ocean character might hint at an Aquaman appearance. As a hulking character, it appears King Shark will be the least mobile of the four playable characters, although we see him jump a far distance and do a ground pound in the trailer, and he will wield a gatling gun.

King Shark also appears in The Suicide Squad, the upcoming James Gunn-directed movie, and you can find him in the Harley Quinn animated show. His full debut came in Superboy #9, November 1994.

We knew Superman was present in the game already, but we got our first good look at him in the reveal trailer. He saves a pilot from a crashing helicopter only to disintegrate him with his laser eyes, giving us the impression that he is mind-controlled. He is referred to as “Alpha Target.”

Superman has been one of DC’s poster boys since his debut in Action Comics #1, April 1938.

While we have not seen Brainiac in person yet, his ship is in full display at the beginning and end of the trailer, and his minions are the ones the Suicide Squad is tearing through. There may be a chance he has brainwashed Superman and the other members of the Justice League.

Brainiac is the main villain in Injustice 2 and has appeared in numerous DC animations and shows as a prominent Superman villain. He made his debut in Action Comics #242 in July 1958.

Amanda Waller is the one forcing the Suicide Squad to do her bidding by implanting explosives in the heads of each member. We have not seen her in person yet, but we hear her giving commands to Harley in the trailer.

Waller appears in both Suicide Squad movies, The CW’s Arrowverse, and various animated shows and video games, including Batman: Arkham Origins and Batman: The Enemy Within. She made her debut in Legends #1, November 1986.