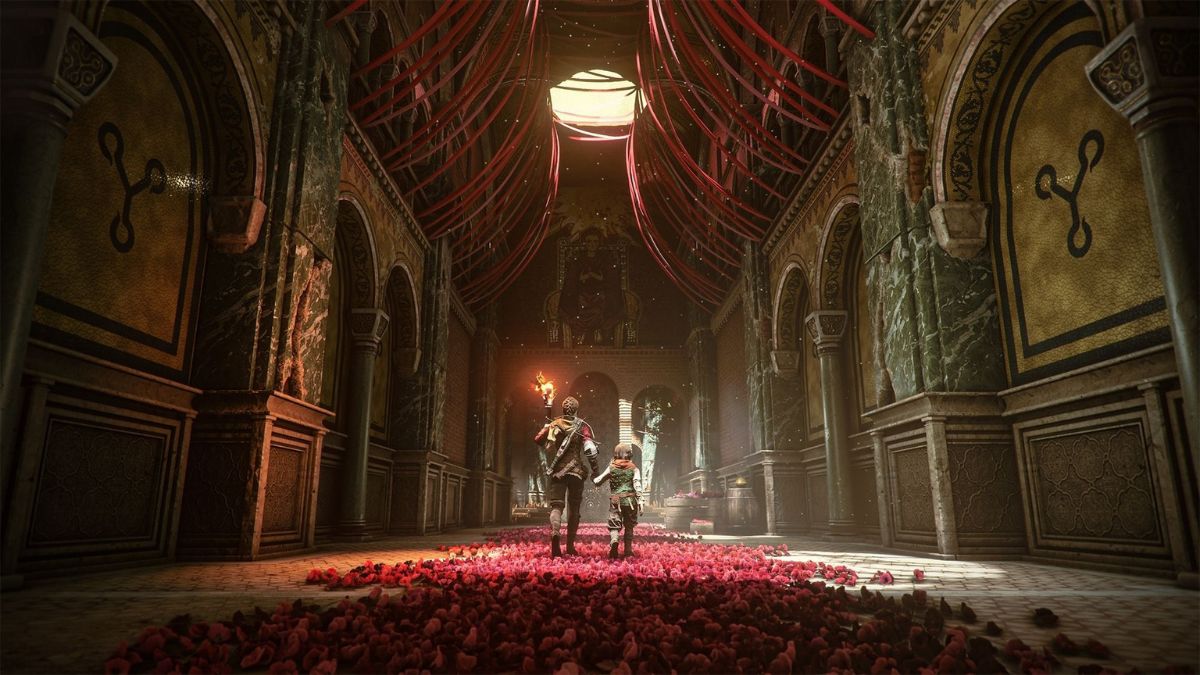 As a sequel to a much-loved game, A Plague Tale: Requiem doesn’t fail to live up to the expectations of its predecessor. Requiem has you take up the role of Amicia as she and her family try to heal her younger brother Hugo from The Macula, a blood disease that is slowly but surely killing him. There are two sides to the story: a gripping tale of the plague overtaking the world, and the small bits of humanity that still remain that remind us that life is about the small moments.

As Amicia, you’ll weave through rat hordes and avoid being on the wrong end of an arrow, axe, or sword. Even after moving on to a new area, you must still deal with the horrors of the plague. While things may seem perfect at first, you quickly need to fall back into your old ways of survival as you sneak past the Count’s army and the gnawing jaws of the rats.

A spark of hope in a dark world

The story of A Plague Tale: Requiem takes many dark turns, from rats engulfing the lands to the Count’s army trying to cover it all up. As you progress through the game, you will learn more about the lives of Amicia, Hugo, Lucas, and others, as they try to cure Hugo of this blood disease that connects him with the rats and the plague. The connections that the siblings make along the way fuel the story and keep you guessing what will happen next.

Throughout Requiem, you will have small moments where Amicia and her younger brother care for one another. There are times when Hugo, true to his childish nature, looks past all the darkness and runs around acting like a king. These moments show the contrasting dualities of a world that tries so hard to bury you and the will to keep on fighting. There is no doubt that this story will take you on an emotional rollercoaster of fear, dread, excitement, and relief.

A Plague Tale: Requiem has a heavy focus on stealth with various RPG elements that keeps gameplay sequences varied. Developer Asobo Studio did a fantastic job blending the two styles to create an experience that feels fresh, especially with so many first-person and action-focused games currently in the market. True to the stealth nature of the game, you will be avoiding guards with different tools at your disposal, but you shouldn’t be afraid to take a few out, should they get in your way.

The two main types of enemies you face throughout the game are humans and rats, with each type requiring different tactics to avoid or subdue. To handle these threats, you are armed with a knowledge of alchemy that you use to craft alchemical ammo. These tools can be used in different ways to help you traverse through various environments, such as lighting and extinguishing fires, stunning enemies, and baiting rats. Each tool lets you take your own approach to crossing an area. No matter where the game takes you, you will always be able to utilize any tool you pick up. Because of this, I never felt like I had to stick to a specific route and had the freedom to make my own decisions.

While there may feel like a large variety of enemies in the game, you can really only place them in a few categories. Sure, mercenaries and guards look different, but there are only a few different types that you will see throughout the game. Because of this, the gameplay can feel a tad repetitive at times as you either avoid or attack the same kinds of enemies with different outfits. This repetition, however, does help in the long run during action sequences, since you are armed with the knowledge of how to easily take each enemy down.

The world isn’t all dark

While the world may be consumed by a plague, Asobo Studio found a way to make even the rat-filled streets of the red city look immaculate. So much detail has gone into the design of the world that it is a crime not to point out how well-crafted it is. You will see everything from darkened city streets and rainswept beaches to flower-filled fields and gorgeous royal castles. While the art style is brilliant, the finer details help add to the game’s overall feel. Seeing each individual rat of a horde as they overtake the dampened roads helps set the dark mood of hopelessness that the characters feel in the moment, just as the brightened forests filled with nomads bring the feeling of hope.

A Plague Tale: Requiem is a carefully crafted experience that brings joy from start to finish. The story continues the arc of Amicia and Hugo in a way that progresses their development while also staying true to their nature. The addition of multiple NPCs helps drive the plot forward by showing you how others are affected by the plague.

The gameplay, though tedious at times, is filled with surprising moments and intense instances that will leave your heart racing. Every nook and cranny of the world has small elements that make it all worth experiencing, even with a deadly plague ravaging the land.