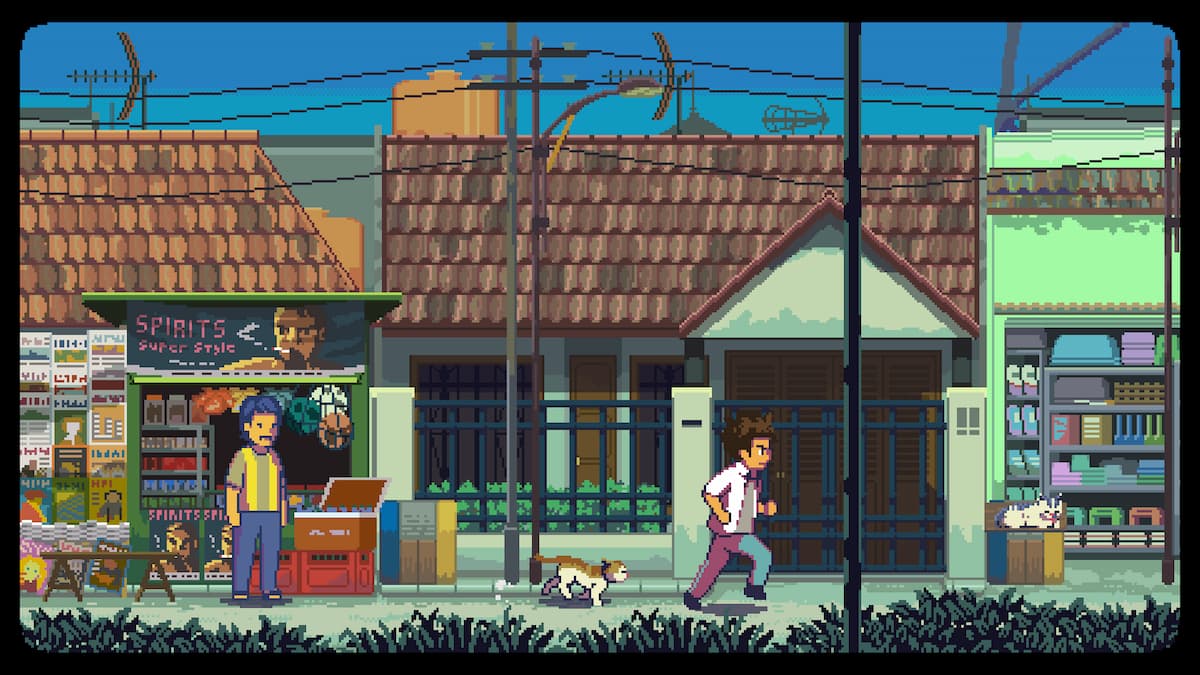 Indie adventure game A Space for the Unbound tells an emotional story about a girl and a boy, hand in hand, trying to stop the end of the world. This experience from Indonesian studio Mojiken excels at immersing you in the complex lives of its characters, who are residents of a spring-colored Indonesian town in the 90s. While disjointed gameplay sometimes interrupts the storytelling, it’s worth pushing through for the immaculate Southeast Asian-inspired music, charming pixel art style, and wonderful characters.

You wake up at your desk…

Published by Toge Productions, A Space for the Unbound has you play as Atma, a high school boy and aspiring writer who starts up a friendship with a creative little artist named Nirmala. One day, while brainstorming with Nirmala, she gets trapped in the river during a storm. While trying to save her, Atma gets pulled under. Then, Atma opens his eyes in a classroom, woken up by his mysteriously perfect girlfriend, Raya, and everything else before that just seems like a strange dream.

From there on, you go on a beautiful pixel adventure with Raya and your other classmates, unwinding the strange, supernatural threat to the town, your dreams, and Raya’s own unstable superhuman abilities. Through puzzles and exploration, you unravel the identities of the town’s residents and encourage them to be their best selves.

When talking about the game’s added dash of magic realism, its efficacy all comes down to Atma and Raya. The game uses Raya’s telekinetic powers to demonstrate her need for control in her otherwise out-of-control life, and Atma’s supernatural psyche-diving storybook to show his desire to help and understand people. A Space for the Unbound’s simple, creative magic system gives this already unique story an extra spark.

The South and North Star Princesses

A Space for the Unbound uses the colors, music, history, and art of Indonesia as inspiration to create a stunning and mesmerizing setting. Even when puzzles got frustrating, the game around them is still beautiful to look at and the town itself is a joy to explore.

This game also has a helplessly delightful amount of attention to detail. For example, the animated bald shine on Uncle Budi’s head? The kind of artistic choice that makes you break out in a smile every time you see it. Naming the cats around town, the accidental hand-touching while eating popcorn at the movies — those little moments all add a special charm to the game that makes you feel all warm and fuzzy while playing.

Where A Space for The Unbound shines the most is in its story. Every character beat was moving, but what sets A Space for The Unbound apart from other cathartic, feels-heavy indie games is how Mojiken handled Raya. As her destructive intentions and traumatic backstory reveal themselves, Raya is allowed to organically evolve and exist as the villain and the victim. So many times in stories about depression, writers fall into a bad habit of leaning too hard in one direction or the other. A Space for the Unbound empathetically, authentically, accepts that Raya is both. She is hurt and she is hurting others, all in an attempt to regain control in what feels like a hopeless situation. But the moral of the story isn’t about persecuting or redeeming her. It’s about accepting her where she’s at and finally giving her the space and support to let those wounds heal.

In a world of sketchy depictions of mental illness and representation, A Space for the Unbound takes precise care in both and is all the better for it.

Get used to the red book and magic wand

In the way of that beautiful storytelling, though, is some gummy gameplay. Now, a good chunk of it was enjoyable. Early little missions and puzzles helped you learn about Raya and Atma’s personalities and the end action was perfectly balanced. But in the middle, there were some interactions and puzzles that slowed the story to a screeching halt. For example, just as Atma learns about Raya’s manipulation of reality and how far she’s willing to go to try to “fix” things, the short walk to find her at the school is delayed by an hour of puzzles.

Also, too many of the puzzles have repetitive, unnecessary steps. When you’re convincing your Sensei to join in on fighting thugs in front of the school, there’s a bit where you call the construction company to move their vehicle. Clever, right? Well, unfortunately, it isn’t just a one-time fix. You have to keep heading back to the phone to keep making the call to move the vehicle back and forth while you’re solving the puzzles. These kinds of repetitive interactive jams happen a fair bit throughout the game, and they can become tedious and frustrating.

With so much back-and-forth puzzling, there’s a follow-up problem: The controls themselves can make the game more difficult to enjoy. When A Space for the Unbound begins, you get few to no control prompts, other than a note on how to run. I had to look in the settings and find the controls tab to read up on how everything worked. And if I already hadn’t decided to use a controller on my own, the fighting mini-games that pop up throughout (which require diagonal D-pad input) would’ve been quite a stressful surprise. Tutorial levels aren’t exactly thrilling, but they’re useful to help ease a player into how a game works. More direction and explanation would’ve made navigating A Space for the Unbound so much smoother.

At times, A Space for the Unbound feels flawless, and you’re bawling at the screen. Other times, you’ll want to throw your controller at it instead. But all of the gameplay gripes are completely worth the hassle. A Space for the Unbound told a stunning, touching story about identity and finding yourself, even in the midst of trauma and crisis. By the end, your heart will ache for Atma and Raya, even if the “game” part of that story gets in its own way sometimes.

With more effective onboarding and a little more fine-tuning from the puzzles, this could’ve been a perfect game. As it is though, A Space for the Unbound still is an amazing experience that lets Indonesia and its culture, art, music, and complex community of people shine.