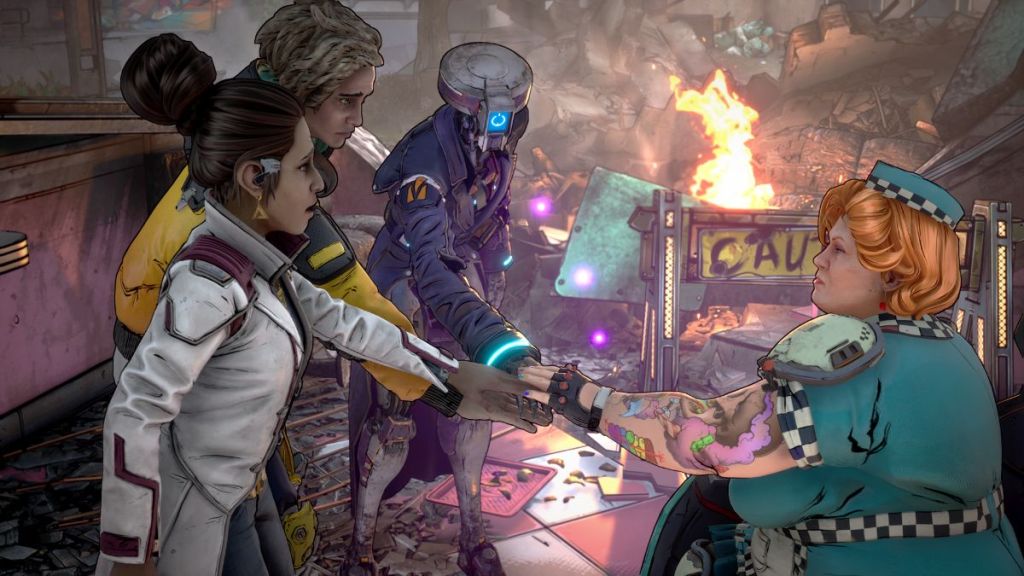 After the Maliwan invasion that happened in Borderlands 3, the people of Promethea are still recovering. Anuradha, Octavio, and Fran are survivors looking to get what they think life owes them as well as trying to prevent future tragedies. This leads the group from location to location around the planet of Promethea and beyond in a hilarious adventure that will leave you questioning your choices around every corner.

A new tale with great side characters

Instead of Pandora, this game takes you to the messy, cutthroat world of Promethea, where corporate overlords command everything. While the massive Atlas Corporation, run by the beloved Rhys, has moved to space, many things have remained the same since Maliwan brought war to the planet.

Whenever some form of peace occurs on a planet in the Borderlands universe, it is soon broken up by another corporate invasion by Tediore as they try to get an edge in the business world. Through a bit of a rocky start and a bunch of exposition, Anu, Fran, and Octavio are brought together, and it is together that they get the idea to make a mark on the world. Anu plays the terrified hopeful with frequent panic attacks, Octavio is the living embodiment of the cringy younger brother, and Fran is the sexually frustrated and mouthy older woman that might be a bit of an embarrassment to be caught in public with.

While their personalities may differ, the dynamic between the three characters is great. There are several moments, mainly brought on by Octavio, that will make you wince with embarrassment, but they are quickly replaced with comedic or dramatic scenes that will leave you laughing or have your heart pounding. These characters work off each other’s personalities in a way that stays true to the Borderlands universe. Unfortunately, there were also many times that I found myself more enthralled by the side characters. Extras in the game include L0u13, an assassination robot with a robust comedy career who steadily learns what humanity is, and Stapleface, a half-psycho who is celebrating her death day. While there are many more characters you will meet along your journey, these two stand out and steal the show whenever they are around.

Promethea is a big planet

The world of Borderlands is one that is constantly expanding. While the first two games of the series focused on the planet of Pandora, Borderlands 3 quickly changed everything by introducing multiple planets that you could quickly fly to. New Tales From the Borderlands expands on the world of Promethea from the small bits of Borderlands 3 you first saw.

The story of the game takes you through the streets of the city to see how the normal people live while also showing you the contrast that is the outskirts where the bandits and psychos roam free and constantly kill each other. Beyond that, you get a look into the corporate world as the group tries to make a name for themselves as more than just a failed scientist, an anger-ravaged froyo maker, and a lovable idiot. I personally liked what was shown of the planet and how Gearbox kept it true to the look of Borderlands 3. Each new area stood out from the last; even each of the multiple visits to Fran’s Frogurt shop felt dynamic thanks to the building consistently changing and the myriad of characters rotating in and out.

Stick with what works

The gameplay of the New Tales From the Borderlands is exactly what you’d expect if you played any titles from Telltale Games, who developed the previous game. As you progress through the game, you will make various choices about dialogue, actions, and emotions. These choices have consequences later in the story that alter what happens. Some of these choices will drastically alter parts of the story like whether or not you will get your insurance payout, while others will merely change bits of dialogue.

This style of narrative game has been around for decades and it has been proven to work with players. New Tales, however, goes the extra mile and adds plenty of minigames such as hacking, slapping, and Vaultlanders battles for you to enjoy. These minigames are entertaining but can easily be skipped if you aren’t feeling up for them. Still, I found myself wishing for more areas to walk around, given how inviting Promethea was.

New Tales From the Borderlands brings a humorous, exciting, and dramatic story that furthers the Borderlands universe. The game is filled with intense moments that matter like choosing whether to kill or freeze an NPC. Some choices, however, will only end up changing small pieces of the game such as dialogue while ultimately leading you down the same path as the other choice.

Will you get the Flaming Sword of Destiny or will you let yourself live the wholesome life of a Jabber? While the characters are somewhat lovable and go through significant changes, many side characters stand out more and easily overshadow the narrative when they are around. New Tales isn’t the best story in the Borderlands universe, but it’s a solid entry that hopefully leads to more.