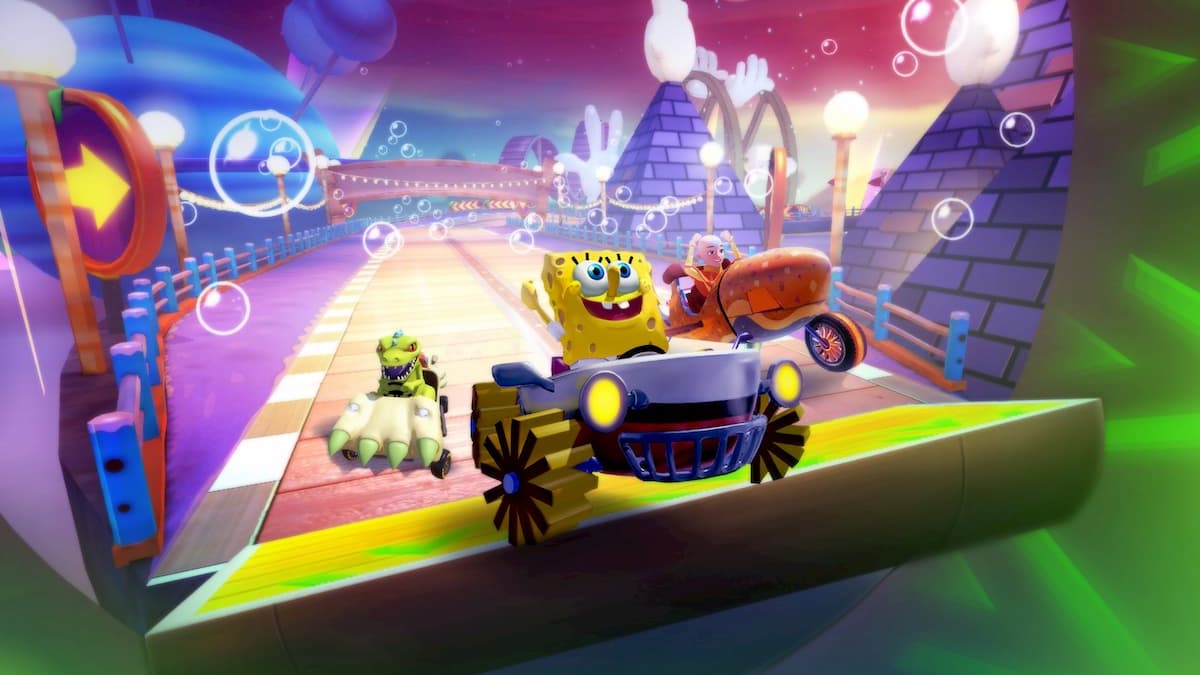 Intertwined with our childhood memories of cartoons are the memories of playing subpar tie-in video games based on them. These were low-budget and rushed titles that you might have rented at Blockbuster or maybe received as an unfortunate gift from an uninformed parent who recognized the characters on the box. You may even remember enjoying these shoddily made products. But as both you and the games industry matured, these licensed games eventually became passé.

Nickelodeon Kart Racers 2: Grand Prix is a completely unsolicited throwback to this style of game. It is an anachronism of a video game, looking like it came from the 2000s while including characters from recent television shows. The first Nickelodeon Kart Racers, from 2018, was soulless and cynical, but I can say that the sequel is twice the game its predecessor was. Unfortunately, that doesn’t mean much, as the first game set the bar so low that it’s below even Rock Bottom.

Kart racers, same as they ever were

If you’ve ever played a kart racer, none of the features or gameplay mechanics of Nickelodeon Kart Racers 2 should surprise you. There’s a Grand Prix mode, with cups containing eight tracks each. Versus and Battle modes are also present, renamed “Free Race” and “Arena” in this game. A Challenges mode also recalls Missions from Mario Kart DS, and Time Trials are here too. It comes across as a carbon copy of Mario Kart 8, even down to the menu design.

There are eight racers on the track at once, and you’ll be doing tricks for speed boosts (like Mario Kart), collecting coins (like Mario Kart), and throwing items (like Mario Kart). Even the items feel reskinned from Mario Kart, with Toy Balls from Rugrats acting as Green Shells and Footballs that hone in on opponents like Red Shells. Every single item in Nickelodeon Kart Racers 2 has an equivalent in Mario Kart and other similar games, with the only original idea being a stinky baby diaper that slows down surrounding racers.

However, there are some neat deviations and ideas in this otherwise by-the-numbers product. The Pit Crew system is very much like the Spirits in Super Smash Bros. Ultimate, giving your racer some unique attributes. Along with selecting your engine, wheels, and exhaust pipes, you’ll choose a Chief and two Crew Members. The Chief gives an active perk that you recharge by collecting slime on the track; for example, Mr. Krabs lets you pull in nearby coins. Crew Members give you passive abilities that recharge over time, such as Eugene from Hey Arnold!, who gives you a boost every time you spin out. It’s a great way to include a large number of non-playable characters, even if you have no clue who the heck most of them are.

WHO ARE YOU PEOPLE?

Any millennials who want to feel the phenomenon of aging rapidly can just take a gander at this game’s roster. Sure, you have SpongeBob and Patrick, who are essentially the Ryu and Ken of Nickelodeon. But classic television shows such as The Fairly Oddparents and The Adventures of Jimmy Neutron are totally missing. Never in my life had I heard of The Loud House until I played this game, although that may just represent a generational gap. And then there’s the inclusion of playable character JoJo Siwa, an actual human being amongst cartoon beings, making this the most unsettling crossover since Pirates of the Caribbean cursed Kingdom Hearts with a fake Johnny Depp.

Luckily for people born in the 1990s, this roster is a lot fuller than the selection in the first Nickelodeon Kart Racers game, which only had 12 characters from four shows. There are now 30 characters from 12 shows, which include cult classics such as Ren & Stimpy, Invader Zim, and Danny Phantom. Aang and Korra from the Avatar franchise are also welcome additions, even though they continue their tradition of appearing in only subpar video games. And even with some noticeable snubs, there are some deep cuts, including a track based on Double Dare.

The first game had an odd bias towards Hey Arnold! references over other shows, but there’s a good spread in the sequel. I found myself actually chuckling at some of the deep cuts — though, with my background and tastes, most of the laughs came from SpongeBob references. To name a couple of these examples, there’s a medal for the most hit player called “My leg!” and the game’s equivalent to the screen-covering Blooper from Mario Kart is Hans, the live-action hand that serves as a frequent SpongeBob gag. It’s nice knowing that the developers are real fans of these shows — every character looks like they should. However, they certainly don’t sound like they should, because that implies any sound component at all.

I have a mouth, yet I cannot scream

The greatest sin of the first Nickelodeon Kart Racers was the lack of any voice work, whether it comes from original or archived recordings. For whatever reason, the second game repeats the same offense. It takes away from any sense of personality from these characters, who all jump for joy upon winning, yet stay completely silent. Even the 2000 PlayStation game Nicktoons Racing from my own childhood featured voices.

Not only does it makes this game lifeless, but it also takes away audio cues enjoyed in other kart racers, such as indicators when you hit an opponent with an item. The barrenness in the audio extends to the soundtrack, which may not be the ear-bleeding tunes from the first game, but are more generic than something you would hear from royalty-free music sites. Theme songs and music scores are pivotal to hitting those nostalgic nerves, so the lack of any recognizable music does nothing but support the notion that this product was slapped together.

Not Ready for Slime Time

Nickelodeon Kart Racers 2 gets to the point where the Mario Kart similarities become blatant and ridiculous to the point of possible plagiarism. One such course based on a toy store has giant trumpets and a piano that plays as you drive over it, an exact copy of Music Park from Mario Kart 7. There’s even a warning audio cue that sounds exactly like the TNT noise from Crash Team Racing. As a final insult, the last cup in Grand Prix reuses four of the game’s own tracks, like the game is stealing even from itself at that point.

Even disregarding the copy-and-paste nature, tracks are overall unremarkable — none of them have any unique gimmicks, other than their visual backdrops, with obstacles having the same function but different skins across different tracks.

The driving and drifting feel responsive and functional, as any game in the genre should. But the physics can get a bit wonky, as karts slow down upon bumping with other karts, creating an unintentional and awkward game of bumper cars at the beginning of each race. Rubberbanding AI has always been an issue with these types of kart racers, and Nickelodeon Kart Racers 2 also has the problem of having an absurd number of unpleasant objects pelted at you when you’re in first. In both cases of crowding karts and excessive items, the game’s 60 FPS rate dropped on the Nintendo Switch at times.

Nickelodeon Kart Racers 2: Grand Prix is a harmless game, far from the obscenity of the first. Even still, curiosity may prevail with cartoon enthusiasts, and clueless parents will certainly buy this game for their kids — it’s been long enough without a large volume of licensed games that many may have forgotten how bad they used to be. Unlike the first game, this racer didn’t send me down a dark spiral where I questioned my entire being in the games industry. At its worst moments, all Nickelodeon Kart Racers 2 did was make me want to put in Mario Kart 8 Deluxe as a palette cleanser — after which, I would put on an episode of SpongeBob SquarePants.