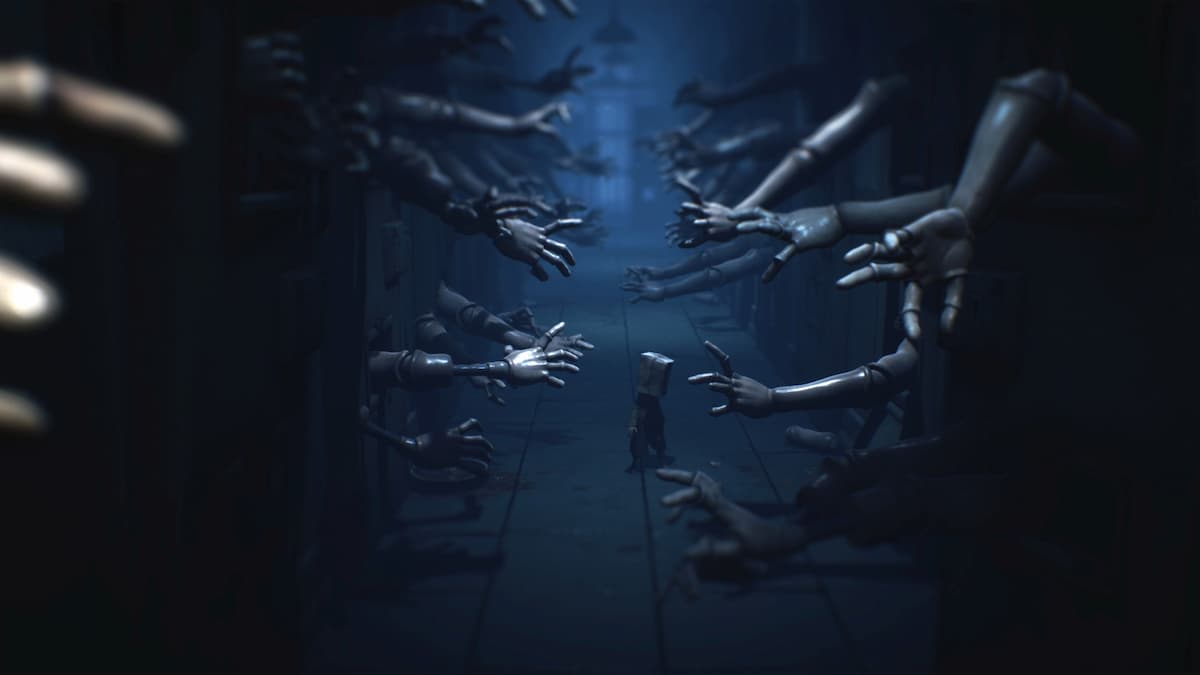 I’m on the run from a grotesque, ceiling-crawling monster. The chase sequence, which I’ve failed multiple attempts at already, culminates in luring my pursuer into an incinerator. My AI partner removes a nearby vent covering so I can escape the chamber. With our pursuer trapped inside, we close the incinerator door and turn it on. Job done, I begin to walk away, only for my partner to sit down and warm herself with the heat from the monster’s fiery tomb. I feel a sudden unease at her lack of morality and, shockingly, begin to sympathize with the entity burning inside.

Little Nightmares II is full of unnerving moments like this. The latest entry in Tarsier Studios’ horror series doesn’t reinvent the genre, but its creepy world, unsettling nature, and intriguing plot ensured that its chilling story beats and existentialist ending lingered with me long after the credits had rolled.

You play as Mono, a young boy whose world has been warped by a mysterious broadcast that emanates from a distant tower. Mono must travel through locations including a frightening forest, a spooky school, and hauntingly horrible hospital to reach the Pale City and unearth the cause behind the transmission.

With Six as your AI co-op partner, the game’s conundrums are more elaborate than the franchise’s first entry. Some solutions might not seem obvious at first, but Six helps to make things easier. She’ll offer small hints if you get stuck at particular sections or act as an extra traversal method — Six can boost you to out-of-reach areas or grab your hand from another platform if you need to cross an insurmountable gap — to guide you. These additions feel natural if uncommon for a co-op game but, with gentle nudges instead of the game spelling it out to you, neither method insults your intelligence.

There are specific puzzles that you must solve alone, but this adds a refreshing change of pace akin to Little Nightmares’ conundrums. In these instances, exploring your environment is enough to provide you with clues on how to tackle them, and usually come in the form of nearby items such as keys.

One, two, we’re coming for you

When puzzles aren’t present, monsters usually are — and Little Nightmares II is full of them. From the porcelain school bullies to the mannequin-inspired hospital patients, foes populate the areas in and around Pale City. Like the first game, your best chance of survival involves staying hidden. This isn’t always possible, and in those instances, attack is the best form of defense. You will occasionally find weapons to go on the offensive with, but using them isn’t as straightforward as they appear. Hammers and axes are cumbersome items for a child to wield, so you have to time your strikes perfectly to defeat your enemies. Little Nightmares II’s combat mechanics, then, can feel slightly clunky, but overall it’s a neat addition to the gameplay experience.

Other times, weapons or hiding simply won’t cut it. Running from bigger, more formidable foes is your only option in these circumstances, particularly those encounters placed at the end of each level. Some chase sequences are genuinely terrifying, and the incorporation of platforming sections for these is equal parts inventive and frustrating. Timing is everything, and one false move can result in a premature ending for Mono.

If you are concerned about dying more than once, make your peace with that now. Little Nightmares II is an unforgiving game, and you will die a lot. Monsters catching you, smaller enemies getting hits in before you, and environmental hazards ensure that your death count will mount up. Luckily, Little Nightmares II’s autosave function kicks in regularly, so you don’t need to worry about losing 20 minutes’ worth of progress if you bite the dust.

Little Nightmares II is a well-polished title, but it isn’t without its sticking points. There were a couple of occasions where, despite seemingly evading an enemy’s grasp, I was caught and greeted with a ‘game over’ screen. A slight annoyance, sure, but one that felt a little glitchy given I had supposedly escaped their clutches. Other pitfalls saw Mono get stuck on an object that I thought he could climb, which resulted in having to revert to my last checkpoint. Thankfully, those instances occurred a minute or two on from the last autosave, so there wasn’t much backtracking to do.

Some fans may be disappointed that Little Nightmares II isn’t a substantially longer entry than its predecessor. A typical playthrough takes between six and eight hours to complete, but there is plenty of replay value if you want to find every collectible and secret. The chapter selection option means you don’t have to play the entire game again, too, which always makes for a pleasant inclusion.

Little Nightmares II is an atmospheric, unsettling experience that stays with you after the dust has settled. It’s more expansive than its predecessor, and it elaborates on the creepy, cruel world that Mono and Six inhabit. The art direction is superb, and the creepy soundtrack only adds to its disturbing ambience.

Finicky gameplay mechanics and a short playtime may not be to everyone’s tastes, but there is plenty to enjoy in Tarsier Studios’ latest offering. Its plot serves as a standalone story and extension of Little Nightmares’ tale, and its plethora of secrets and collectibles means that you will want to conduct two or three playthroughs to locate them all. It will be interesting to see where the franchise can go from here — particularly from a narrative perspective — but, given the excellence of Little Nightmares II, Tarsier Studios should have no concerns about diving back into its beloved series in the future.