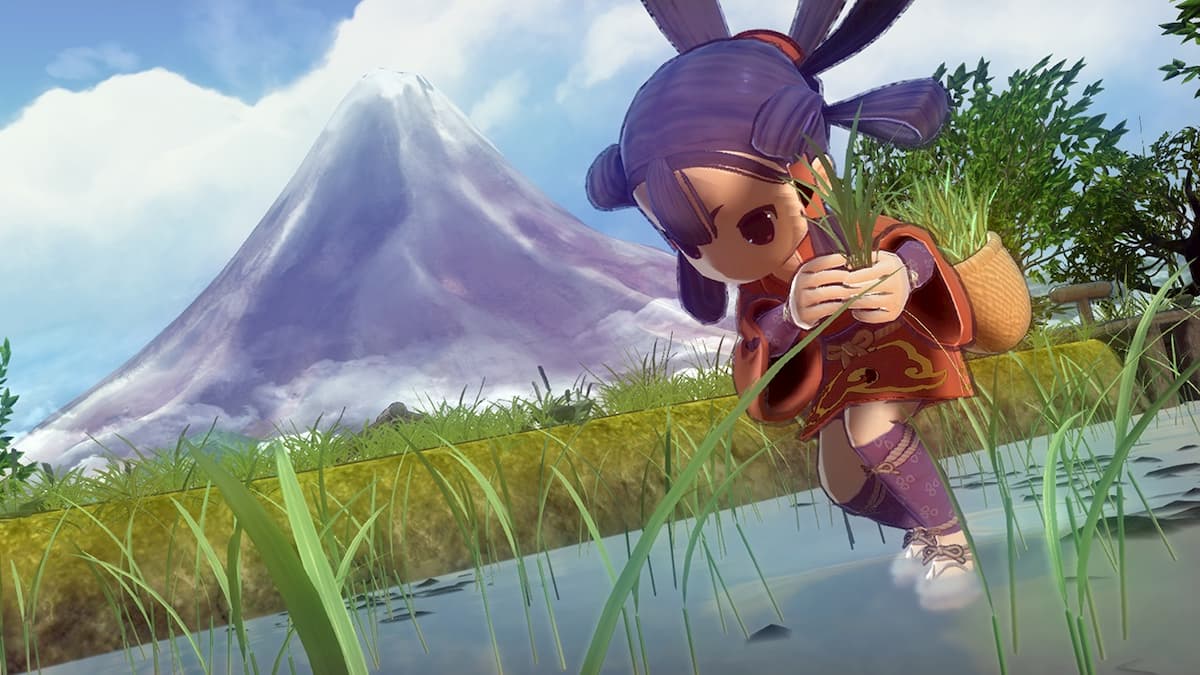 Sakuna: Of Rice and Ruin is an ambitious game by developer Edelweiss. A fusion of platforming and crop management, with social elements and a smattering of RPG systems on top, it tries to do a lot, and in many ways, it succeeds. Sakuna is an interesting game, with fun characters, solid voice acting, and engaging systems, but it lacks just a little bit of polish in too many places, and some players might find the micromanagement of rice to be a little offputting.

The seed of a story

You play as Sakuna, a somewhat spoiled and entitled deity. After your anger gets the better of you, you find yourself banished to an island to experience the real world as punishment for accidentally burning all of the holy rice. Your only companions are the humans who inspired your rage in the first place, and an old retainer who is there to keep an eye on you.

The island is actually the former home of your parents. Your father was a god of war, and your mother was a god of the harvest, giving you something of a leg-up on life. Your inherited skills will be put to good use, as the island is a desolate place, inhabited by demons, and lacking in food. You’ll need to explore the world which is broken out into multiple dungeons, find food and resources, grow rice, and navigate your blossoming relationships with the humans who now share your life.

It has to be said, the voice acting is very good, and the story is more engaging and heartfelt that we anticipated. Watching the characters grow and develop is a lot of fun, and keeps you moving forward as much as any mechanical reward.

The action side of the game plays out in the form of a hybrid combat platformer. While the traditional idea of platforming is jumping obstacles, Sakuna: Of Rice and Ruin mixes in a surprisingly deep combat system. Different abilities and combinations can be unlocked as you grow in power, there is all manner of weapons and items that you can build or find to help you, and multiple different types of enemies force you to think about how you are fighting.

The platforming is fairly standard, with some depth being added in the form of the Divine Raiment, a magic scarf you can use to latch onto the environment to get to awkward to reach spots, avoid obstacles, and generally zip through the levels. You can also use it in combat, and it’s a great way to avoid incoming damage and rapidly reposition in a fight. It can be slightly hit or miss when it comes to aiming, however, and is one of the areas in the game where just a little more polish would have really made it shine and led to less frustration.

Combat, while fun, can also cause some issues for you. The game often falls into the trap of just throwing enemies at you, and it can be easy enough to get stun-locked. This can be a little frustrating, as it feels like a result of bad AI rather than a considered aspect of encounter design. There can also be just a tiny of a delay to jumping. It’s hard to explain but it simply didn’t feel as responsive and smooth as I would have liked at times.

Outside of these issues, both are quite fluid, boiling down to how well you master the Divine Raiment. I predict that people who get good with this magical scarf will have a far more fun time than people who struggle to master it. A focus on combinations gives combat an almost brawler feel that is very welcome, and you can chain movements and attacks very smoothly to move from target to target, dishing out punishment then whisking yourself to safety.

Of Rice and Rain

The other side of Sakuna is taking care of your rice crop. Each year you will plant rice, care for it, manage water levels, deal with weeds, then harvest it, dry it, and process it. While you can assign these jobs to other characters, you will tend to get better results if you take care of them yourself. Rice is planted one seed at a time, and you need to take it out of your bag, plant it, then move on to the next one. For some players, it might feel a bit overdone, especially compared to the speed of harvesting, but being honest we quite enjoyed it. Most of the steps involve some form of input chain to do simple tasks, and we can easily see this wearing on some people. Thankfully, you can hand these jobs off to other characters.

Rice is an important aspect of the game, not just for the survival of the family, but also for your character’s power. The better the crop, the stronger you get, so taking care of it well becomes very important. It’s a nice meeting of theme and mechanics that we enjoyed. The game falls into an easy pattern of exploring the caves, then checking up on your crop when you are back at your home, visiting with the other characters, and trying to learn the ins and outs of the game.

This is, perhaps, Sakuna’s biggest downfall, in that it can occasionally be a little obtuse. You only know that rice placement is important, but you don’t quite know how to do it to get the maximum benefit. This takes some trial and error. It is the same with water levels, exploring the world at the start of the game, and really hits home the first time you find all your food has spoiled because you need another character to process it.

In a way, it mimics that fish-out-of-water nature of the main character, but it is still a little bit annoying that some warnings don’t come a little bit quicker.

Sakuna: Of Rice and Ruin is a fun, sometimes frantic, sometimes heartwarming game. Watching the relationships between characters unfold is a lot of fun, and Sakuna is an interesting character specifically because she is quite unlikeable at the start, giving her room to grow. Unfortunately, some important areas could do with just a little bit more polish to really make it shine and give players a better experience. One obvious area is the camera controls when you are at your home. It feels like something that needed to just a little more work to get right.

Tiny moments of frustration can crop up at some of the design decisions at play, and the game’s failure to explain some important aspects of its own mechanics is certainly frustrating, but overall Sakuna: Of Rice and Ruin is an enjoyable title that succeeds in experimenting with the traditional platforming mechanic.