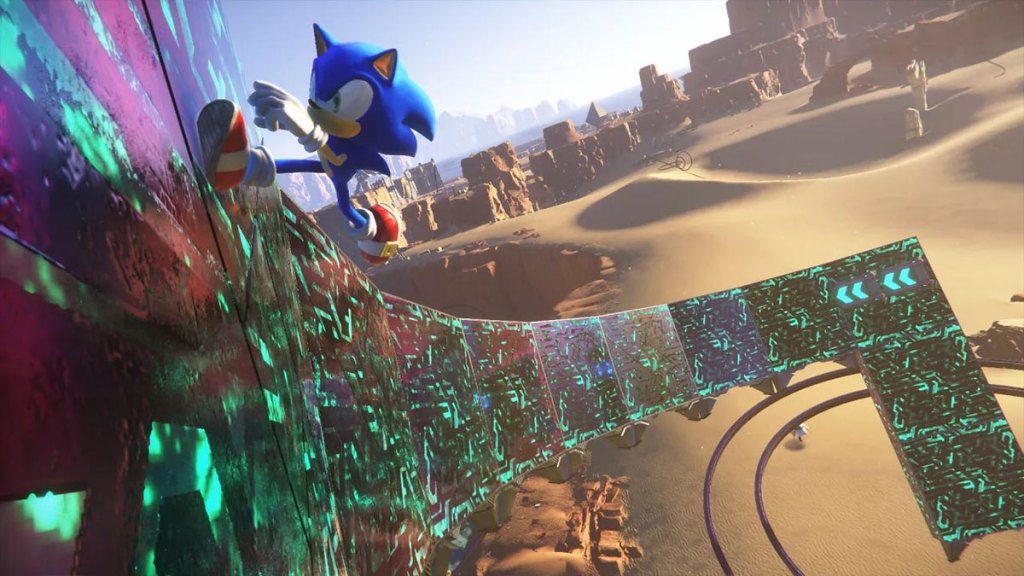 Sonic has had a tumultuous time lately. For every high like Sonic Generations, you have the multiple lows in Sonic Boom: Rise of Lyric and weird tangents like that time he turned into a Werehog. After so many years of ups and downs, it was time for Sega to find a new hook for Sonic games. Luckily, it looks Sonic Team has something to build on with Sonic Frontiers.

Sonic, Tails, and Amy have come to the Starfall Islands to figure out why the Chaos Emeralds teleported there. Of course, Eggman was there too, messing around with ancient technology, causing him and Sonic’s friends, including Knuckles, to become trapped in Cyber Space. Sonic will scour the island, collecting the Chaos Emeralds to fight the ancient Titan robots and find out about the long-gone race of people who made them along the way.

Zone exploration with a side of boost

Sonic Frontiers adopts a new open zone exploration gameplay that is the focus this time around. Essentially, this game is cut up into five areas that are pretty large open worlds. Right off the bat, running around these areas is a joy, more often than not. Each section is filled with obstacles for Sonic to master to earn Memory Tokens, which are tied to main and side progress. These are your typical bounce springs, grind rails, and other environmental items you see in every Sonic game that invigorate this game with some classic hedgehog gameplay.

Throughout the game’s five maps, you are given wide open areas where you can just run and explore to your heart’s content. Outside of the third area in the game, Chaos Island, each map is designed well enough to be a playground for Sonic. For the most part, these play areas are fun to continuously run through while encountering various puzzles, obstacles, and enemies. You can easily lose some hours just exploring this place and not forwarding the story at all.

When you enter portals, you are implanted in Cyber Space, where you need to get through a course that you likely will recognize from Sonic games in the past decade-plus since Unleashed. Interestingly, Sega used assets from Sonic Generations to build these stages, so you will see a lot of Green Hill, Chemical Plant, and Sky Sanctuary Zones here — but the layout of the levels themselves is what is eye-catching. You will play through recreations of City Escape and Green Forest from Sonic Adventure 2 and the opening level from Sonic Unleashed, just made to look different.

These levels are great because they were fast, fun-filled action areas in those games, but I was hoping for something a little more original here. Frontiers is supposed to be a new direction for Sonic, but this nails home how stuck in the past Sega can be. Frontiers has now joined Forces, Generations, and Mania as recent Sonic games to bring back Green Hill Zone, and I am so tired of seeing it. I would rather see a dedicated remake of the Sonic Adventure games than Sega trying to sneak this past me. I am all for a look to the glory days of a series’ past now and then, but not every single time a new Sonic game is released.

The gameplay in Sonic Frontiers is mostly focused on running fast, as you would expect, but there is also a very noticeable attempt by Sega to experiment with mini-games here. Throughout the main story, Sonic will have various challenges to unlock an overworld map and help his friends assist the Kocos of the Starfall Islands, this game’s slightly more interesting version of a Korok from Zelda, but they probably could have been replaced with Chao. Not everything is a success, but I’m glad to see Sega throw a bunch of new ideas out there. Things like rounding up Kocos in a time limit before being hit three times is something I found to be a nice sidetrack. On the downside, the pinball and timed sky-falling sections of Chaos Island had me pulling my hair out with how wonky the physics were and how the criteria to complete them was pretty harsh. Hopefully, future titles won’t have such distractions tied to their main progression.

Sonic knows how to kick it

While running around, you will encounter various Guardian enemies that you need to defeat to earn Portal Gears, and this is where you get into Sonic’s new combat style. As you would expect, Sonic is very quick and can land combos on his enemies as you power him up. You can unlock new moves from a very small skill tree that gives you a new arsenal of badass attacks that feel great to pull off and look awesome. I was disappointed at how limited the skill tree was, though, and gathering skill points after finishing it was pointless. By the end of the game, I had about 100 skill points that just couldn’t be spent anywhere. That area of progression could definitely have been replaced with a different system. Regardless, combat feels good, and I always enjoyed fighting in Frontiers, in stark contrast to the slow, repetitive fights in Sonic Unleashed.

When you acquire six of the Chaos Emeralds in each area, you can go into a boss fight against one of the game’s Titans. These sections start as Shadow of the Colossus-like areas, with you climbing up the beast to reach the final Chaos Emerald before transforming into Super Sonic and shifting into an epic almost-Dragon Ball Z showdown. Since Super Sonic is invincible, these are a race against you losing your rings rather than being worried about being hit. Combine parrying with pulling off combos to take down these mammoth foes in combat sequences we have never seen in a Sonic game.

While the events of these battles are undoubtedly fun to watch, this is a case of style over substance. All these battles come down to stunning your opponent with a way too forgiving parry system before beating them up and then doing a few easy quick-time events to finish them off. The second and last boss fights, in particular, I thought were pretty pathetic. While the things Sonic was doing looked awesome, I didn’t feel like it was me doing it, but rather the game running itself. Also, the game ends in a section of quick-time events, which should always be a big no-no for any modern title. Overall, the combat system isn’t perfect, but I think it has great potential for a future Sonic game. If Sonic Team can fill out the skill tree more and have the player feel more in control of boss fights, the studio might have something good going.

Sonic and co. are finally growing

While the larger world and gameplay changes will be the big focus for players, one of my biggest takeaways from Frontiers is how much I enjoyed the smaller moments in this story. While the layout of Frontiers’ story is pretty on par with past Sonic games, the conversations between Sonic and his friends make this story far more interesting than anything they have gone through up to this point.

As you collect enough Memory Tokens, you begin conversations with each of Sonic’s friends, figure out what is going through their heads, and go way deeper into their characters than we ever have before. Tails addresses his odd moment of weakness in Sonic Forces and how he’s tired of being a sidekick. Knuckles feels very alone being the last Echidna and is tired of being cooped up on Angel Island. Amy dreams of finding love one day, not just being a creepy stalker of Sonic. We actually see Sonic himself being physically affected by this journey, which was great to see. He’s not an invincible force — he’s pushing through his physical limits to save his friends. There’s even significant character growth for Eggman through in-game memos and towards the end of the story that really surprised me, and I’m very excited to see where Sega goes from here with the character. It seems that Sonic Team is willing to finally let its villain evolve after decades of being a basic bad guy like Bowser is to Mario.

Sonic Frontiers is also very focused on addressing the larger world outside the Starfall Islands, with numerous references to past games. He notes how a waterfall reminds him of Mystic Ruins from the first Sonic Adventure; Tails says a blast in a flashback sequence reminds him of Dark Gaia from Sonic Unleashed; and Knuckles has flashbacks to his first encounter with Sonic in Sonic 3. There are also tons of references to past friends like Shadow, Rouge, Jet, and more that remind us that these characters live in a world that is much bigger than the adventure they are currently on.

Sonic Frontiers is undoubtedly an exciting development for one of gaming’s icons. Running around the open zones never gets old, and if the developers can fill out the combat a little more, they could have a dual-punch threat in a future game that will really be great. The Cyber Space levels are a fun revisit to some of Sonic’s best past levels, but I’m tired of returning to these spots. After the past decade being so up and down for Sonic, this is hopefully just the first step in a race that will see his games being a little more consistent in quality.