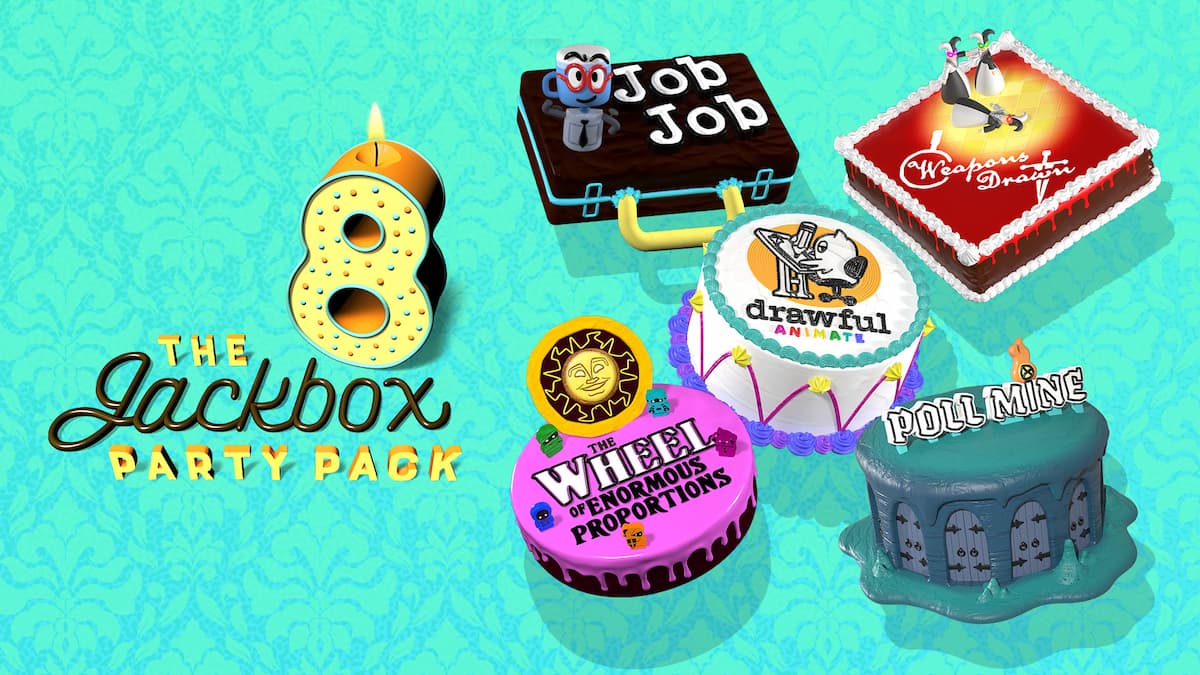 There’s a level of stress that any game, video or otherwise, can give to a potential player as it tries to onboard you to its unique ruleset. Every annual pack that developer Jackbox Games delivers has five chances to convince you that not only is its content fun, but it’s worth learning. Each successive pack has provided more complicated minigames, but The Jackbox Party Pack 8 has enough noteworthy hits that should hopefully prove to be accessible.

As usual, there are five games in this collection: Drawful: Animate, The Wheel of Enormous Proportions, Job Job, The Poll Mine, and Weapons Drawn. We’ve reached a plateau of how stylish and charming the presentation of these party packs can be, but Jackbox Games continues to add quality of life changes. For one, accessibility options are now systemwide instead of per game, addressing a complaint of last year’s collection. Naturally, the following games will all stand on their premise and overall fun factor.

As an absolute cursed variant of Pictionary, Drawful has long been a Jackbox standby along with Quiplash and Fibbage. Very much like with Fibbage, players will have to try to throw everyone else off the scent — each player will be given a silly, incongruent prompt to draw, and upon seeing each piece of art, come up with a fake prompt. Players will then try to guess the real prompt, with points awarded for fooling others.

The twist here, as the title implies, is the element of “animation.” It isn’t anything extreme, as you are only drawing two frames. Still, having some movement allows for more colorful prompts and some accompanying hilarious drawings. The artist can adjust a slider changing the speed of the animation, but other than that, this is very traditional Drawful. The only added element is a Friends Mode, which like Fibbage: Enough About You, has the prompts center on the actual players, certainly a fun option for close friend groups. Just be sure to utilize the small space well — unfortunately, there are no options to erase or undo.

The Wheel of Enormous Proportions

This second game down the list is where this party pack starts to get complicated. Granted, this pack is very smart with its tutorials, easing you into how the game is played as you are actually playing it, but the first several minutes of The Wheel of Enormous Proportions will have you puzzled. This is essentially a trivia game, and earning more points and “slices” of a wheel will let you spin a massive wheel with your phone screen. After reaching a points threshold, the winner will have a question they typed in at the beginning of the game “answered” by this all-knowing wheel.

It’s quirky, and whether or not you’ll find it obnoxious is entirely up to taste, with the Wheel constantly quipping. The questions themselves are fairly standard trivia questions but with an unusual methodology for answering — sometimes you will be mixing and matching names to titles, or selecting multiple answers from a giant list. It’s a good way to guarantee that everyone will accumulate points somehow. Spinning the wheel itself is quite satisfying, but the element of luck and the nearly incoherent points system invokes the randomness of Mario Party. It puts on a fun show, but you have to tolerate some absolute nonsense.

The clear favorite of the bunch is Job Job, a game of wordplay and the biggest potential for hilarity. All players are competing in a “job interview” and will be given standard icebreaker questions to answer on their phones. In the following round, all players will be given a random scramble of words based on everyone else’s responses and will have to answer brand new questions. And there’s a lot of versatility — you can use words multiple times, and even use words from the prompt itself.

It’s very much like Survive the Internet from the fourth pack, where you utilize your fellow players’ words to create humorous (and usually inappropriate) sentences completely out of the original context. It’s the versatility that gives Job Job the edge, as it allows players to be more creative than any wordplay-heavy Jackbox game in recent memory. This game produced the most laughs and screenshots out of anything else in this pack, though it was admittedly more fun with more players, which obviously provided more material to work with.

While I’m unsure if The Poll Mine can be considered an RPG, the adorable fantasy aesthetic of this team-based game was a great way to start it off. This is a more successful version of Split the Room from the fifth pack, as it is based on the players’ opinions on some relatable topics. Players will be polled and rank a number of options accordingly — for example, which school subjects they had most difficulty with. Two teams will take turns choosing which door to open as they progress through a dungeon, all based on the different options. In the school subjects example, the doors representing the top three picked school subjects across all players are the safe doors to enter; choosing the wrong door loses your team a torch.

It’s a fascinating and layered game — you have to think of not only your preferences but also what the rest of the group might have answered as well. It’s a game where you really have to know your audience, and one where group discussion is absolutely required. And your strategy will have to pivot once successive rounds have you pick, say, the second, third, and fourth most popular options instead. It should inspire some boisterous conversations, but with the points system, we found ourselves tying at points, leading to a lack of satisfaction.

To call Weapons Drawn a “simplified version of Clue” would be disingenuous, as it’s complex in its own strange way. It’s a murder mystery game that involves drawing and deduction, and there’s quite a lot to unpack. Each player will be asked to draw two items, which turn out to be murder weapons; they will have to incorporate a letter from their username into it to act as a clue. Afterward, all of them will bring a “companion” that they name — a great opportunity for cheap jokes — and during a high society party, the lights go off. Every player will then try to murder the companions, but they will have to successfully guess which companion is with which player.

And to add more layers, once the lights are back on, several of these companions will be found murdered in cold blood. From there, players will have to work together and observe the “murder weapons” to deduce the perpetrator of each murder. The game presents two choices and asks everyone to select which one will be easier to solve, and then players will have to cross-reference all of these drawings to determine who drew that murder weapon. It’s a smart game, but a lengthy one. Later in the game, you do what’s basically a lightning round of guessing all of the murderers, which might have been preferred to the slow burn deduction. You also can’t tell who is ahead, which could be a fun element, but it’s difficult to gauge any progression through the game.

These games all have distinct and eccentric art styles, and there’s always something pleasant to look at or listen to, with a variety of theme songs with clever lyrics. Jackbox Games has long figured out their groove from the early You Don’t Know Jack days, and the joy to each year’s party pack is discovering what weird concepts and surreal characters they came up with this time.

During rounds of Job Job, random characters from previous Jackbox packs will make cameo appearances, going to show just how extensive the company’s library of games and characters has become. The Jackbox Party Pack 8 will probably not be the end of the line for this series, and even though the games today are far more complicated than something you’d see from the first or second packs, iteration is the key to a fun pack of games. Gather your friends together (if it’s safe) and get cracking on uncovering the intricacies and strategies of these games — hopefully with a ton of laughter in between.