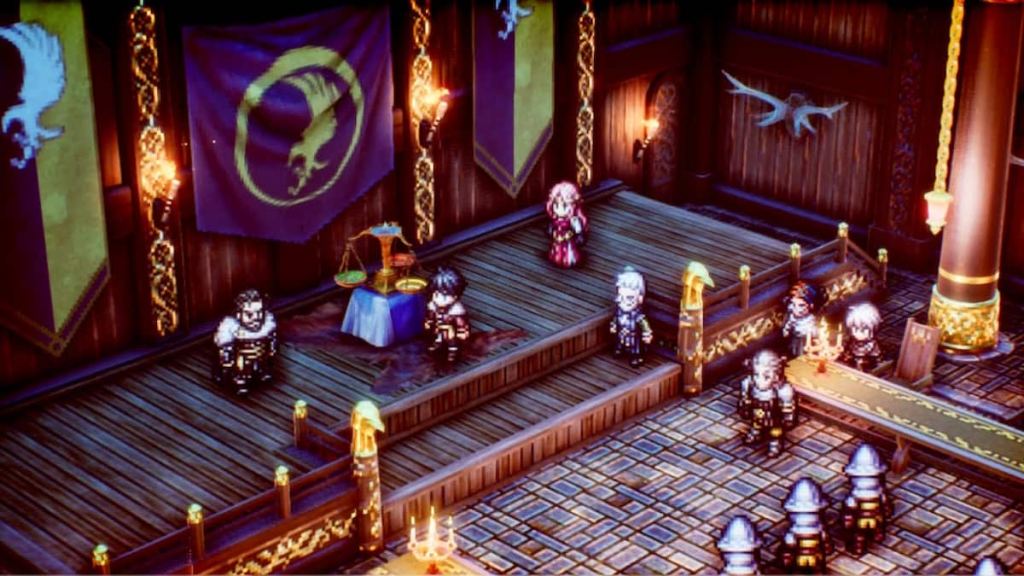 For some folks out there, the tactical strategy RPG genre is sadly underserved, lacking in the number of entries that befit the best genre in video game history. The good news is that Square Enix has been doing great things in the space, with Octobapth Traveler and now Triangle Strategy. In many ways, it is the spiritual kin of Octopath Traveler but is also a very different game filled with surprises and fun mechanics that give it an identity of its own.

Triangle Strategy takes place in Norzerlia, where three great nations control important resources. Aesfrost controls the iron, Hyzante controls the salt, and Glenbrook which rests between the two has learned to export diplomacy because of that fact. In Triangle Strategy you will navigate the political tides, collect a private army, and do battle against your enemies.

After spending about 50 hours with the game, it occurs to me that I have actually played two games in one. The first is an interactive, demanding, and highly addictive political thriller that challenges me to tough tactical battles. The second is all about pouring so much exposition into my head that I fear it might explode. Still, I find myself returning to Triangle Strategy, again and again, addicted to the challenges the game presents.

The fighting in Triangle Strategy takes place on gridded battlefields, where players will take on assorted enemies with a multitude of strengths, weaknesses, and abilities. Your characters echo this system, each one being tuned to a specific purpose. Using them well or poorly will decide your fate in battle.

Resources are limited and the maps can present interesting tactical opportunities that vary between fights. Add in the overall importance of positioning and the combat is some of the most enjoyable I have experienced in the tactics genre. The joy of battle in Triangle Strategy is that it is about constantly weighing pros and cons. Decisions need to be well thought out, and the more effort you put into finding the best course of action, the better you tend to do.

Elements from deciding who to attack, who to heal, or where to place a character may sound simple enough, but Triangle Strategy does some neat tricks to make it all a little more complex. The most obvious one is a lack of permadeath. Having just one surviving unit means you win the fight, but will not lose downed characters. This allows you to experiment, be brave, and take risks, and there is a lot to be said for how much impact that has on combat actually feeling fun.

Unit positioning is also hugely important. Get a friendly unit on either side of the enemy and you can trigger chain attacks from the opposite unit, but the same applies to your enemies. If you allow yourself to be surrounded, things can get worrisome quickly.

Another interesting mechanic is that units can have their own subquests during a fight. If you pull off certain feats or tasks, this can give you the chance to use an extremely powerful ability. Deciding if that chance is worth chasing  adds another layer of interest and decision-making to each fight.

The only downside to the combat is how the game will leave you wanting more of it. This is not a game where you barrel from fight to fight, growing ever stronger. Instead, you can take advantage of training exercises when you are in your camp. These mock battles let you gain valuable experience for your party members without the need to risk it all on the battlefield. I actually really like this touch. It allows characters to experience training, earn experience, and grow more powerful while accepting that within the world of the game, real combat is a distinctly tricky situation that should not be engaged in lightly. That said, it’s not a substitute for how impactful combat can feel in a game when there are consequences within the story, and the reasonably large gaps between narrative-based fights might prove to be an issue for some.

Where Triangle Strategy may prove to be a little bit tiring for some is the sheer volume of cutscenes and dialogue. There is something to be said for encouraging a bit more interactivity in a game, and this is the one area about Triangle Strategy that may prove to be truly divisive. This is not a game you can pick up and play in short bursts. You need to set aside the time to take in a considerable amount of dialogue with little interactivity.

One of my favorite aspects of the game is the narrative decision-making. Choices are not to be made lightly. Players will get all manner of feedback and advice from party members when a decision must be made. The decisions are given weight and importance, befitting a world where political intrigue has such sharpened edges. Interestingly, party members have their own motivations, and you won’t always be able to win them to your side, which is very refreshing.

Another interesting part of the game is the sheer volume of units you can get for your party that you might never be able to explore. This adds a lot of replayability but may risk leaving players feeling like they were unable to find the time to explore all their options.

Fans of games like Final Fantasy Tactics won’t find a loyal exploration of the systems established by those games, but they will definitely find a game that is worth exploring for its own strengths.

Triangle Strategy is perhaps a little slow to start and is challenging for those who might struggle with cutscenes and too much dialogue, but for everyone else, you are in for a treat. With an interesting story, excellent combat, a fun cast of characters, and an engaging story, Triangle Strategy takes the foundations of the tactical strategy RPG and builds something new on top of them. The game manages to be both familiar and surprising at the same time, which is a testament to the care that has gone into its design and production.