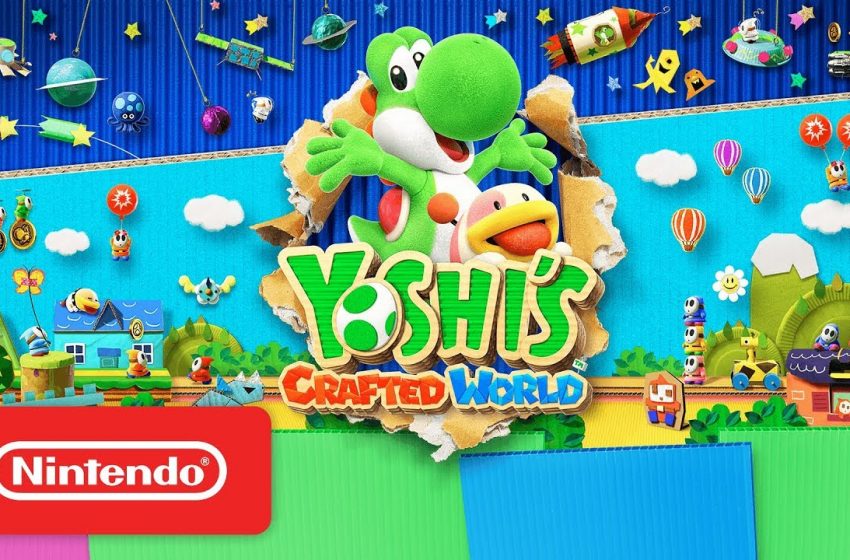 Only the minds of Nintendo could take two things such as a small green dinosaur and children’s arts and crafts and combine the two elements to make a stellar game.

Yoshi’s Crafted World, the first new game in the Yoshi series for nearly four years since the Wii U’s Wooly World, takes everything you know about the Yoshi formula and intensifies it. You have the same mix of platforming and egg throwing that fans have come to know and expect from the series along with a new sense of wonder at the art direction the team over at Good-Feel decided to take.

As one of the many multi-colored Yoshis, it is your job to scour the world in search of bright colored gems before the evil King Bowser Jr. and his minions can claim them for his evil deeds.

To do this, you must go against tough bosses crafted from different materials and enemies around the world and find a bunch of Smiling Flower collectables dotted around the map to open the way forward to complete your quest and restore balance to Yoshi’s world.

Yoshi’s Crafted World is your typical Yoshi platforming game that requires you to go from one side of the map to the other without dying in various themed levels. Along the way, you’ll have to solve small puzzles, take on hordes of enemies, and try to find a bunch of hidden collectables to help you on your quest.

The game can be beaten in about six to eight hours if you rush through every level as quickly as possible in your first playthrough, but where’s the fun in that?

Each level has a handful of collectables for you to discover. By collecting 20 red coins or finishing a level with a full health bar of 20 hearts, you’ll be rewarded with a smiley flower, which you need to access later stages. You can also find flowers hidden in each level on your quest to 100 percent.

The real genius that comes from this game’s use of collectables, however, is its use of setting. Collectables won’t only be found in the levels, but could also be hiding sneakily behind something in the background. As such, you need to really survey a world and take it in, trying to find presents and enemies hiding behind destructible cover.

For instance, in one of the opening few levels, you’ll notice a bunch of Shy Guy enemies with coins above their heads in the background behind bushes and all sorts of cover. You can’t reach them, however, so just aim your egg at one of these objects, and the game will do the rest to help you collect whatever they might be hoarding.

When you finish a level, you’ll also gain a special bonus mission for each one that will have you work through a level in reverse looking for adorable little Poochy Pups. Finding each one and getting to the end of the level in a set amount of time will get you a few extra collectables that could be vital in unlocking a new section of levels.

While going back through a level again might seem like a chore, the real benefit is seeing a new perspective of the level you might not have noticed before. The developers went all-in to make sure that the levels were fully designed and going through them in reverse allows you to see small sections of detail that breathe life into the world.

In the first level, for example, all the flowers that were seemingly flowing in the wind turn out just to be Shy Guys holding them up and moving them about. It’s these little details that really make you want to revisit every level to see things that you might have also missed while trying to find those final few pesky collectable trinkets.

There are also other levels that shake up the platforming formula by having Yoshi complete small mini-games. In one instance, you go into the level to pilot a giant Yoshi mecha trying to score as many points as possible by destroying everything in your path. In another, you are going through a level jumping through multiple rings to rack up a high-score.

These elements help to break the formula and after alternative ways of play so that players don’t get exhausted with the same game play for hours on end and are honestly a breath of fresh air.

Of the small number of gripes we have for the series, one of the biggest things we found ourselves doing was backtracking through levels multiple times to try and find one pesky collectable that eluded us.

Some of the title’s collectables are incredibly hard to find unless you know where you are looking and can be a chore to find at times, making any completionist incredibly salty in the long run.

The game can also come off as a bit hard to a casual player, with some of the later levels platforming sections a bit difficult, especially for those trying to get to the end of the level with all their hearts. Thankfully, there is a way around this though by using one of the many costumes in-game.

Costumes act as a form of armor for Yoshi, allowing you to take a small amount of hits in a level without losing any hearts you have gathered. If that didn’t exist, however, some players would have a hard time sooner or later.

Granted, all this nitpicks just come back to how we played the game. If you wish to storm to the end and not worry about collecting everything you are destined to have a good time. For the avid collectors out there though that hate missing collectables while they go through the game— prepare to be searching for hours if you don’t plan on cheating to find the way forward.

It’s hard to fault Nintendo and the team behind Crafted World much. The art direction is something we have hardly seen before and really brings this literal Crafted World to life. The details on every little thing are truly stunning, and how you can interact with the world around you gives players nearly an unlimited amount of options for how they can go through the levels.

Yes, this game has its fair share of gripes, and anyone looking to 100-percent complete it without looking for hints, tips, or tricks online will be severely frustrated. The game can also be brutal at times, but that doesn’t mean that the title doesn’t give you enough resources to aid you on your quest if you choose to use them.

Overall, Yoshi’s Crafted World is just another great title to be added to the Switch’s already-impressive library. It’s sure to appease fans looking for new games before Christmas when heavy hitters like the new Pokémon game and Animal Crossing come out, and it definitely shouldn’t be missed.

Bring on the next one. We’ve had wool, crafted materials, and a host of other art styles in Yoshi games now and we can’t wait to see what Nintendo comes up with next—Yoshi’s Clay World, anyone?

Disclosure: Our Nintendo Switch version of the game was provided by Nintendo.