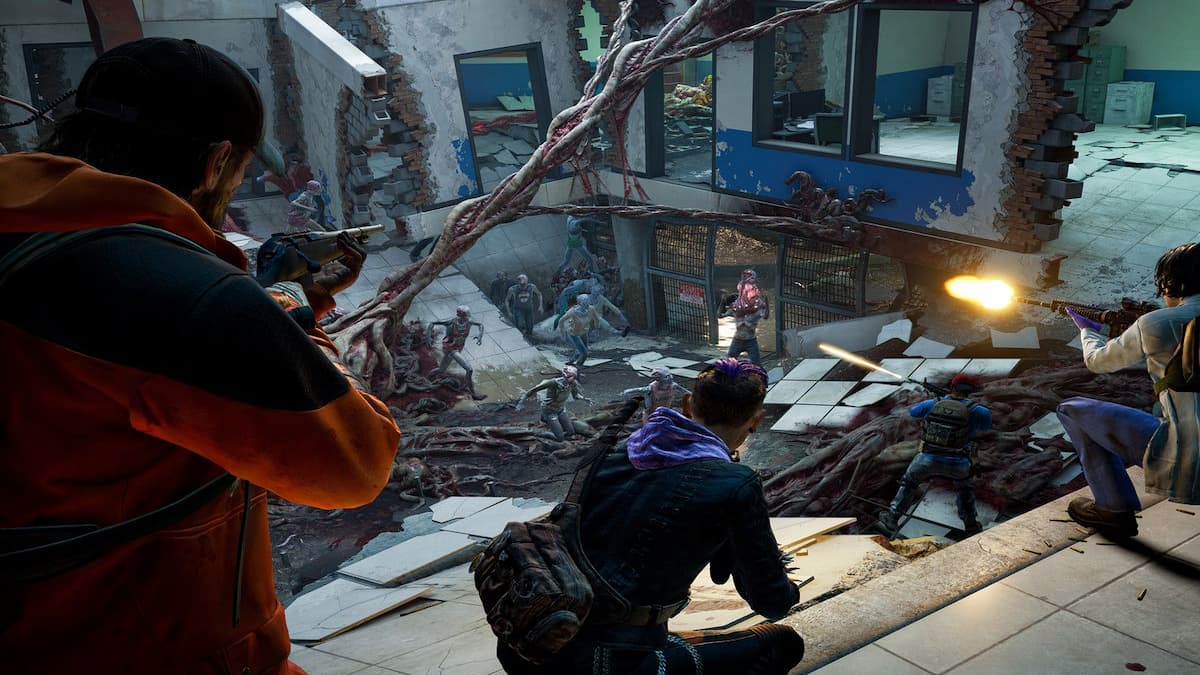 Since its unveiling in December, Back 4 Blood has been my most anticipated video game release of 2021. I was a massive fan of Left 4 Dead, and seeing the original team go back and focus on another cooperative zombie shooter, with more bells and whistles, had me immensely invested from the beginning.

Back in December, I was able to play the game during its technical alpha test, and I was pleased to find not only a fun, fluid Left 4 Dead-like experience, but that Turtle Rock Studios showed off how they were adapting the game for modern audiences. Now the early access open beta has only pushed that even further, allowing Back 4 Blood to step out of its predecessor’s shadow for a spot in the limelight.

Right off the bat, Back 4 Blood feels great to play. The weapon selection has been dramatically improved since the alpha, and it starkly outnumbers what we saw in Left 4 Dead. Shooting in the previous series was handled by hip firing, but now you can aim down your sights. While this is great for long-distance firing, players who prefer to hip fire can still rely on that as all the enemies will be charging toward you, and everything is pretty accurate.

My only complaint with this system is that while you can always add new attachments to your gun, you cannot drop attachments or swap them to a new weapon. This makes investing in a gun questionable since you have a chance to find something better in the game and cannot bring what you purchased with you. Should they incorporate something along the lines that Apex Legends has, where the better attachments automatically are put on your new gun, this would feel so much better.

At the very least, removing attachments without having another to replace them with would help players ensure they have the loadout they want. Take out the attachment issue, though, and weapons in Back 4 Blood feel just right.

As you fight your way through the levels in the campaign, you will likely be reminded of Left 4 Dead’s layouts. These linear levels act very similarly, but some new ideas are introduced. The concept is basically the same: fight your way through the undead and reach the safe room. In the beta, some objectives mix up the formula, including destroying nests to create a bridge to cross a river and destroying mine shafts to stop the Ridden from spawning. These are great implementations that I hope to see further experimented with when we get to play more acts at release.

In short, the one act and eight chapters we have access to now are exactly what you want to see from Back 4 Blood.

When I got access to the technical alpha, I thought the game already looked pretty good. The character and enemy designs were all on point and fit the world perfectly. Since that time, the developers have definitely focused on making the worlds look much better.

For starters, the brightness is handled much better. Outside of a corruption card making things harder to see, visibility is much better in this build of the game.

The birds have received the most noticeable upgrade for objects in the maps, but I have noticed some nice adjustments on the side. For example, items now have a chance to spawn inside cars. If you see something inside one, you can break the window and reach inside. This is such a nice inclusion that Left 4 Dead never had. Just this small detail helps the world feel bigger without adding more to it. It gives the player the idea that supplies could literally be found anywhere and helps to promote exploring.

Swarm is not the PvP Versus this game needs

While campaign mode feels excellent almost all around, I do have worries about Swarm, the Versus Survival mode that will take the place of PvP, and the only way you can play as the Ridden in Back 4 Blood. In short, teams swap between Cleaners and Ridden and try to survive as the humans longer than the other team in each round. As the round goes on, the Ridden get stronger, and a swarm of insects forces the Cleaners to huddle together in a small circle until they die. Think of a battle royale circle forcing players to come in or harm them.

Swarm mode is fine. That’s about all I have for it. The fact of the matter is, it’s not the Versus mode from Left 4 Dead that has teams competing to get farther in the campaign levels. That format is simply a lot more fun than what is here. Sure, Swarm matches don’t take as long, but there is a lot of sitting around and waiting for the Cleaners to scavenge, and then, within a couple of minutes, the round is over. The arenas do not leave much room for pulling off great team plays as the Ridden, and if anyone leaves early, they are not replaced, making the game completely unbalanced until it finishes.

Turtle Rock Studios has been very upfront about there being no plans to implement a campaign Versus mode like Left 4 Dead had, and I believe that is a terrible choice. Many fans enjoy that mode and keep coming back just for it. Swarm mode is a fine side mode, but if they do not implement something better to keep your attention on the PvP side, they are only actively harming the community.

They are banking big on the card system

If you follow Back 4 Blood at all, you have probably heard at least some talk about the card system Turtle Rock has implemented. Essentially, picking your cards before each round is choosing the perks you want to have, and playing and unlocking cards will help you create better decks to be even stronger. Some cards are just better than others, and honestly, there has not been a ton to choose from in either playtest I took part in. I expect there to be a lot more to play and experiment with when the game releases, but overall I think it’s a good inclusion.

On the opposite side from the card system, the Game Director will play corruption and challenge cards to make the experience harder for you. The Game Director is supposed to change up the experience every time you get into a game. Item placements, enemy spawns, and the overall toughness of those enemies will be handled by the Game Director. I love the potential for this, but honestly, so far, they have felt a little lackluster because I feel like I see the same ones over and over again on each level. Hopefully, more changes come with more cards coming out.

Regardless, I absolutely love the AI Director from Left 4 Dead. If the Game Director can pull off the same changes each time you play and add in even more alterations, I will  be head over heels.

A hub with promise for a lot of customization

Finally, there’s the hub. This area was not available in the alpha, but I was surprised to see it when starting up the beta. This area is called Fort Hope, and inside you can walk around but not do much, at least so far, in the beta. At the moment, you can talk to four people here: an army guy to start the campaign, a coach to start Swarm, someone to edit your card decks, and the Supply Lines lady to unlock more cards to cosmetics. Additionally, there is a practice range where you can pick up any weapon and put damage into targets.

I typically am not the biggest fan of hub worlds in multiplayer games. All of the options above can be handled in the menus with a quick press of the button, making this all feel very unnecessary. That being said, by looking around here, you can see that there are more things on the way when the game launches.

For instance, a couple of people will look at you and talk to you when you get close, but you cannot interact with them. I suspect Dusty at the Quartermaster to handle weapon cosmetics, and there are two people in the back by gym equipment that might hint at some character progression, surprisingly. Finally, a man sitting and writing on a clipboard says you will like something he has in store when you get close — no idea what he could be bringing. I still am not a big fan of Fort Hope, but we may see some pleasant surprises that come out of it.

Overall, I could talk about Back 4 Blood for hours, and I am just so happy to finally have a spiritual successor to Left 4 Dead. Not everything is perfect here, especially when you look at the PvP side of things, but Turtle Rock has put a lot of work into this game, and I cannot wait to see the full release. Here is hoping that the beta tests help prepare them to take down any online issues when the time comes, and they start looking at the community and taking into consideration what it has to say about the PvP side.