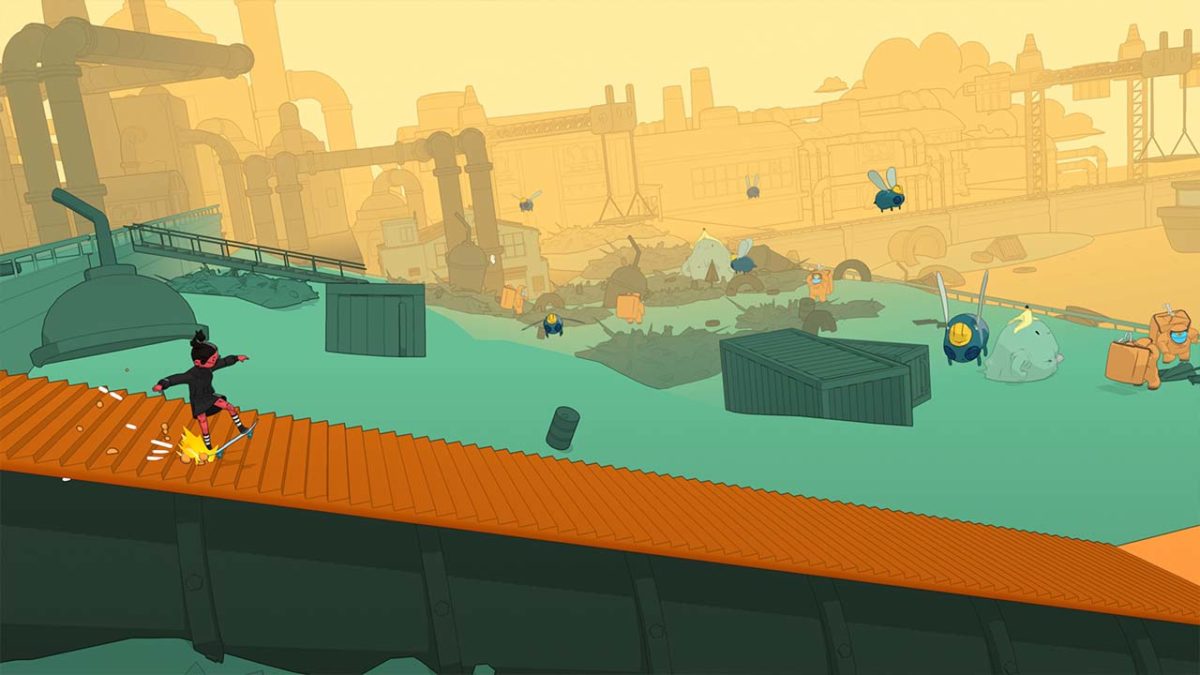 OlliOlli World is an action-packed skateboarding platform game. With lots of colors, heaps of content to unlock, and lots of tricks, players around the globe are loving it. We had the chance to sit with some of the senior staff who built OlliOlli World to get their thoughts on the game.

Naturally, being a skateboarding game, you’d expect the designers to be into skateboarding. Creative director John Ribbins and Roll7 co-CEO Simon Bennett had got back into skateboarding around 2018. During this time, Bennett said it “felt like the natural time to return to the OlliOlli series,” as many fans were asking for another installment.

Simultaneously, the team “had the artistic and creative hunger to put all the lessons” learned over the past few years into practice. It had been nearly a decade since the original OlliOlli game had released in 2014.

The creators of the game said that whilst skateboarding forms the basis of the game, it isn’t “obviously” a “literal” interpretation of skate culture. Instead, much of what is happening in the game is a “love letter” from the Ribbins to “the way skate culture changed from when he was growing up.” Ribbins was much younger than he is today and the culture of skateboarding has changed a lot. When he was a kid, it was very much a closed circle.

Bennett describes skating culture today as “a lot more open to diversity, and the skating world embraces people from all walks of life […] it’s no longer ruled over by the Skate Godz, or built around grinds that wrap buildings and climb tree.” Instead, skating culture today paints a picture of “joy and fun” for everyone. The team says this is the reason why OlliOlli World is so colorful and welcoming.

At its core, “OlliOlli World is a really fun action platformer.” The team encourages people to dive in and become “lost in the flow and challenge yourself.” Anyone should be able to pick up the game and find something that resonates with them.

Bringing in the celebrity talent

If you’ve been following the OlliOlli World news, you’ve probably seen Danny Trejo is an in-game character. Bennett said it’s still just a “wild” feeling to know they have Trejo in their game. The team said they were “looking for somebody zany and really fun” who fits the “wild and wonderful” cast of characters currently in the game. Trejo seems to have fit this bill. More celebrity talent is likely to come to the game, but the team wasn’t giving away any secrets.

The reviews from OlliOlli World have been pouring in from around the internet. The team members at publisher Private Division said they have been blown away by the “amazing reviews and previews.” Bennett said that “it’s so rewarding to see people loving on this game we’ve all been working on quietly for years!” According to them, they believe people are enjoying the overall “vibe.” It’s a “very chill kind of game,” as Bennett describes it.

The team believes the broader appeal compared to their first two games, along with a new art style, are what’s bringing new people to the game. Bennett said it’s tough to choose a favorite part of the game, but it’s probably the art style. “OlliOlli World feels like such an aesthetically pleasing space to be in; it’s unique, almost visually hypnotic. I love it.”