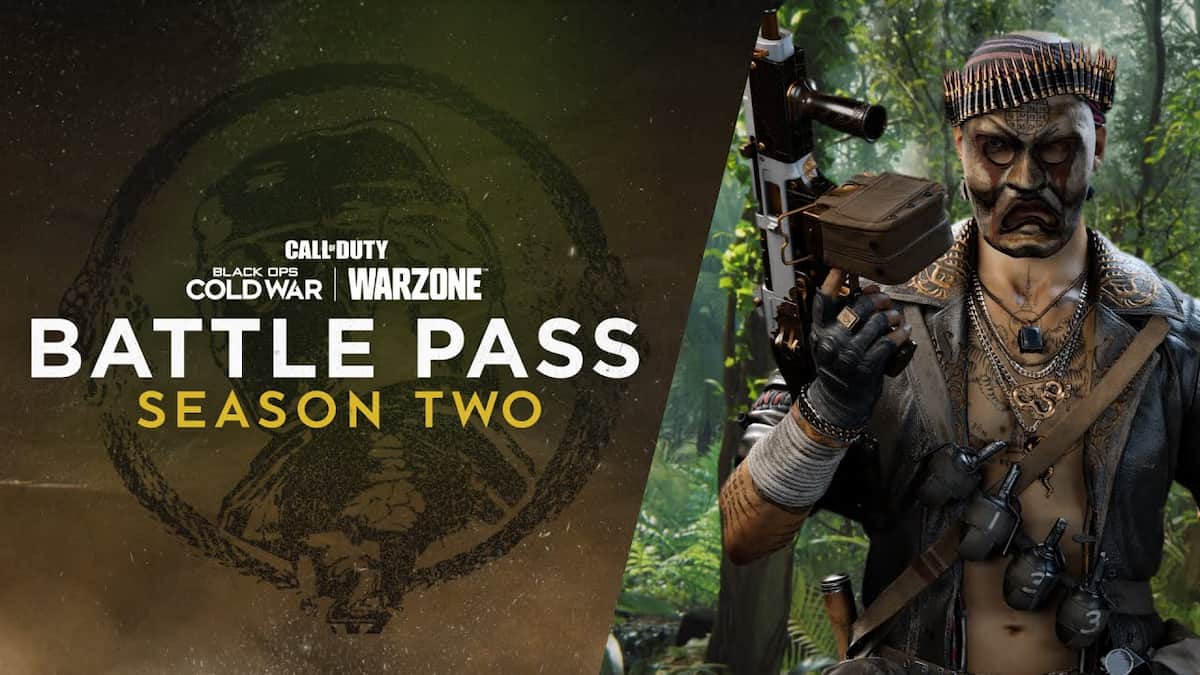 The second Battle Pass is finally here for Call of Duty: Black Ops Cold War, but it delivers many firsts for the franchise as a whole. Unlike last season, this time around, a color-changing skin makes its debut, and fans will see a light mix of exotic reticles through their tiered journey. With so much to offer between Tier 1 and 100, here are our rankings of the best items in the Season Two Battle Pass.

As only one of just three reticles, the best in the Battle Pass is a round trapping net that is centered our every scope’s central marker. Aptly named Wide Net, this design certainly helps record some hilarious headshots when enemies find themselves in your catcher. Unfortunately, it is only for Battle Pass owners but does unlock rather soon via Tier 47.

Not all of the best goodies need to be unlocked. Park, a beloved Operator that has been around since launch, has earned a Rambo-inspired makeover that is instantly rewarded upon buying the Battle Pass. Although this skin does blend in grassy areas well, an all-black Survivor skin can also be unlocked through her dedicated missions.

Songs like Billy Idol’s “Rebel Yell” and Kim Wilde’s “Kids in America” are perfect tunes for the average Warzone player, but it is not what hardcore fans will be playing. Instead, true series fans will be jamming out to the Black Ops II Mixtape, which features Jack Wall’s memorable “Adrenaline” and Zombies-theme “Damned 100AE.” This War-track set is made available after Tier 44 for all players.

If you haven’t had time to upgrade the MP5, the First Mate blueprint is an excellent choice to experience its potential. Thanks to its Serpent Grip Handle and 40 Round Speed Mag, the First Mate is seemingly the first to always shoot in combat and looks dazzling while doing so. This Legendary blueprint can be acquired at Tier 27.

The must-have Operator skin of the Season Two pass is seemingly Naga’s Warlord variant. Compared to his default outfit, this top-prize dawns a camper-friendly all-black jacket and one intimidating mask. This unique spin-off to the headlining Operator can be used when reaching Tier 100.

The Poison Dart SMG is one of the first blueprints compatible with the new LC10 and makes for a heavenly pairing. Users will come to find that the print’s Vandal Speed Loader and Bruiser Grip give it the extra aiming quickness and power it so desperately needs in its original state. The Poison Dart SMG will be rewarded to pass owners at Tier 100.

The legendary Samurai’s Creed blueprint may be the most important item this season, far be it the best. With the FARA 83 immensely slower than most fully-automatic weapons, leveling up this behemoth won’t come easy. Thankfully, this gorgeous gold and scarlet skin comes packed with five attachments that surprisingly boost its speed and accuracy to great depths. The Samurai’s Creed can be equipped after Tier 71.

Despite the MAC-10 SMG still managing to blow away audiences of both Black Ops Cold War and Warzone, the LC10 probably won’t garner the same reaction. Unlike its predecessor, this submachine focuses more on accuracy and ammo rather than the beauty of damage and speed. That’s not necessarily terrible, considering that’s what most ARs do. However, with an honorable handle equipped to aid its lackluster Aim Down Sight rate, the LC10 can still be a solid mid-range choice.

Another former Black Ops feature returning to the series is the Reactive skin — a gun design that alters its color based on player performance. As Black Ops Cold War’s first and only Reactive, users will witness the Vulture Exo skin go from cooler to warmer colors with every three eliminations made.

However, in this Black Ops title, it seems Reactives are going to be packaged with blueprints. In this print, those who get to Tier 95 will also own an AK-47 with one ridiculous boost in damage rate.

Considering the current state of assault rifles in Black Ops Cold War, it wasn’t hard for the FARA 83 to already debut as the best in the class. As a clear relative to the Galil, the gun provides a balance of attributes that mainly only Tactical Rifles have had. As long as players make a gun build that can make-up for its lack in accuracy, the FARA 83 will be one of the most dominant weapons in Multiplayer and Warzone.