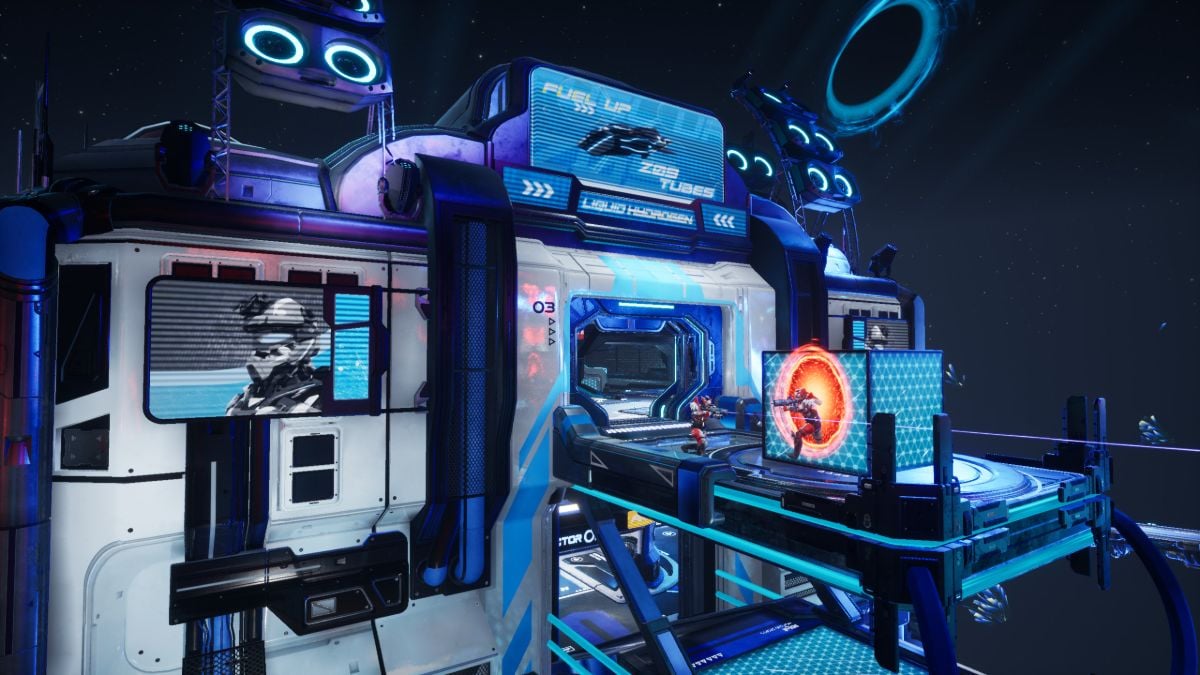 Splitgate is the latest FPS craze to hit consoles, but it’s hard to get up to speed with the number of arenas available in the game. Each map requires different tactics, and we’ve outlined the basics on how to overwhelm the competition. We’ve listed all the arenas in Splitgate and how to succeed.

The abyss is set in a ruins area with some technology throughout the map. Bridges intersect between short-range corridors, making this a shotgun-friendly map. It will be fun for those who love to blast faces off in their first-person shooters. However, while crossing the bridge, there are opportunities for opponents to use long-range weapons to take you out. The best strategy is to alternate between a long-range and short-range weapon for maximum success.

Set underwater in the ocean, Atlantis is a pristine cruise-like area. There’s a mixture of short-range and medium-range areas to please both kinds of players. The ballroom in the middle of the map is a key hotspot, so it’s best to avoid that area at all costs if you can; keep in mind, you can rack up the kills there if you’re really good. There are three to four floors on the map, so it is very vertical. Keep an eye on the minimap on the top left and listen for your opponents’ footsteps to get the jump on them.

This exclusive nightclub is pumping out the music, but the real party is the deathmatch happening around you. The middle section of the map has a small building, and then there are two wide areas for mid-range snipers to take advantage of. There are many stairways and about three levels of platforms, so watch out for attacks from above you.

Crag is one of the smallest maps in the game. It’s pretty much a square path of tunnels. Good luck to anyone who likes to snipe in Splitgate because the shotgun users will take kills like stealing candy from a baby. Running and gunning is your best strategy here.

Foregone Destruction is stairways, stairways, stairways. There are sharp corners to be aware of, so make sure you’re listening out for opponents and keeping an eye on the minimap for their exact positioning. There are also sneaky platforms underneath the arena. Place some cleverly placed portals on a busy area and then make a second portal around the sneaky platform. From there, you can get some surprise headshots from the view of the portal.

Helix is a fairly wide-open map set in a wintry city. It’s also one of the most vertical, with steep drops throughout. Use portals to the fullest extent for the best movement in Helix and get the jump on your opponents.

Inspired by Japanese forests, Highwind is one of the smallest areas on the map. In this treehouse-like setting, there are small corridors developed to be made for intense combat. The Splitgate website recommends you go in a pack. Going alone means certain doom as there are very few places to hide.

Splitgate goes close quarters on this farmland turned arena landscape. You’ll be able to get the upper hand if you can find the shotgun or plasma rifle in the vicinity. There is a tunnel section that you can walk around, which would be perfect for a shottie. Meanwhile, an assault rifle would be fantastic for mid-range battles outside. Snipers might have a tough time here as the map isn’t symmetrical, unlike most other maps in the game.

Fueled by lava, this research facility is a paradise for mid-range FPS gamers. The tightness of the outside and inside areas is bliss with a rifle or an SMG, as you can blitz through your foes like no one’s business. However, be careful of environmental lava hazards, in addition to the rail gun and the rocket launcher.

Taking on a Middle-Eastern flair, the Oasis map is a wide-open desert area primed for long-ranged combat. Sparsed throughout the map are tighter indoor areas that made the gameplay varied. It’s particularly fun with the Team Shotty Snipers mode with the map variety in mind.

The higher buildings and taller sandhills make for some verticality in the map. Weapons usually spawn in the center of the map.

Olympus is an arena in the sky, but you need to keep focused on your competition rather than looking at the clouds. The scale of height that contenders must face is enormous. You’ll have to keep an eye above your head for incoming sniping shots. Short-range weaponry is definitely not key here, so try to sharpen up on those long-range skills. Olympus is so whacky that you can get from one spawn point to another with your portal ability.

Pantheon is a map of interconnected bridges with small indoor areas throughout. On the bottom, there’s a simple pathway, but you need to look out for those who could snipe you at any moment. It’s best to stay at the same level as them to avoid getting wrecked by the other team, but at the same time, there are some amazing sightlines on the bottom section as well.

Stadium is the standard map you’d expect from an FPS. It’s for the purists out there. It’s symmetrical, there are sections for both snipers and short-range attackers, and it’s traditional in nature. There aren’t any surprises here, but it’s still a lot of fun to play in as pure skill is tested on this map rather than a gimmick. If you’re a Super Smash Bros. player, this would be the Final Destination of Splitgate.

All of the maps each have their own style and unique environments to explore. If you have an Xbox Series X/S or a PS5, it will likely look even better down the line with a native version for the game. To improve your game, you should change your controller settings as well.