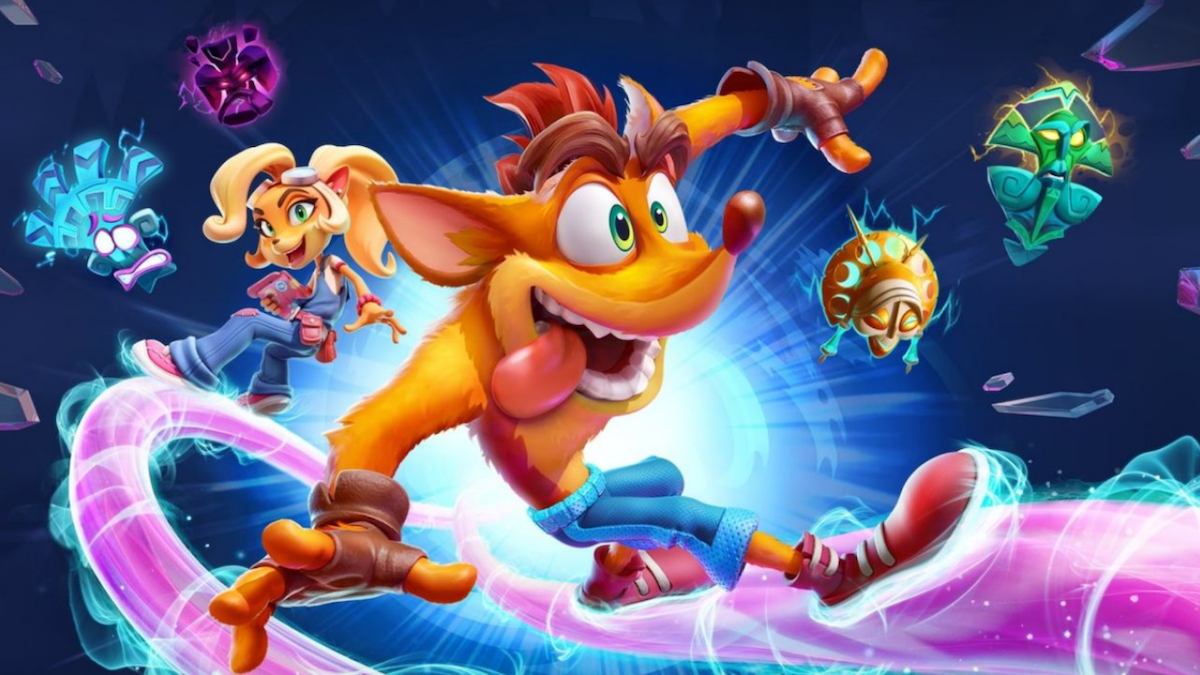 Every Crash Bandicoot game has to come with some fun boss fights to meet you throughout the game. Luckily for you, this guide is here to tell you about each one in Crash Bandicoot 4: It’s About Time so you won’t have to be taken by surprise when they pop up.

The first boss of the game takes place in the Hazardous Wastes. After taunting you in the build-up to this battle, the half-man-half-robot doctor will try to fight you once again, but this time in the context of a heavy metal concert with the help of his new creation, Rawk-It-Head.

It’s a simple fight — N. Gin will send out flaming minions at you, which you will need to hit to send them back into his giant speakers. Do this while dodging the electrified, spinning discs he sends at you, and once a speaker is destroyed, Crash or Coco will be able to run up and hit Dr. N. Gin. Just remember that the conveyor belt you’re on is slowly moving, so you will want to be constantly moving forward.

Just rinse and repeat until the kind doctor has been defeated.

Louise, the newest addition to the gauntlet of bosses in the game, is a big sea monster that you will encounter at the end of the Jetboard Jetty level in Salty Wharf. You will want to avoid running right into her tentacles or face, as they will lead to your defeat.

You will notice a bunch of sword-wielding rats riding barrels and floating right for you. All you need to do is lure these rats to run into the tentacles and you will begin to drop her health bar. You can even tempt a tentacle to strike another, as long as you have more than one present. Just keep doing this and you will send this creature back to the depths.

Dr. N. Brio will greet you in the Tranquility Falls dimension, right after you defeat Louise. He has a plethora of potions he has made to throw at you while he stands atop a platform.

The strategy is simple: dodge the clouds of gas that these potions emit and then spin the green goo monsters that will come out after his lobbing. They will fly up into his face and damage him. Do this enough and he will go into his second phase: he will go full Hulk on you, in which case you will need to dodge this hulking version of the Doc until he goes into a daze. When this happens, the ‘Akano will come to you, meaning you can use the Dark Matter Spin to knock him off the platform.

Just do this a few more times and the battle is won.

Dr. Neo Cortex, the arch-rival of our favorite bandicoot, is the next boss after going through Bears Repeating in The 11th Dimension.

He will start the fight off by shooting a barrage of missiles at you. Just run around to avoid these and wait until Punchbot Mark 2 comes out for you. Wait for it to become dazed and spin it. Then you’ll have to dodge some more attacks that Cortex sends out to you, similar to the ones N. Gin sent out of his drumming robot, and another Punchbot will come for you. Spin it and this will be followed by having to dodge the missiles and the electric obstacles until another Punchbot appears. Spin this one as well.

You will then enter the final phase. During this part, the platforms you are on will slowly start to disappear. Keep dodging his missiles until he presses all the buttons at once, and be on the lookout for the platform you are on to start shaking. If it does, get off of it as it is about to go away. He will keep doing this and the platform will continue to get smaller; just dodge the missiles and remember you can use Kapuna-Wa to slow down time if you need it. Eventually, the final Punchbot will come out and you just have to spin it.

The two failed N. Tropy attempts will team up to fight you in space.

You are going to want to use Kapuna-Wa a lot during this boss fight as you run through the platforms while dodging the slow-firing laser. Lucky for you, it is fairly inaccurate and doesn’t just target the platform you are on. Once you reach the end, both N. Tropys will chase you around the rim of their ship. Be sure to spin the yellow power sources and dodge the blue energy balls, while using Ika Ika to change gravity frequently. Near the end of the fight, the male N. Tropy will begin chasing you and you have to do it all again with increased difficulty. Do the same thing: spin the yellows, dodge the blues. After this, you have to do it one more time with the female N. Tropy chasing you. At the end of this step, spin the final power source and the fight is over.

The final boss of the game has you facing off with your nemesis once again, this time in Cortex Castle.

This fight is fairly similar to the first one, but at the beginning, Cortex will take away all four of your masks and use them himself. The first phase of the fight is basic: bounce on the Shoot-O-Matics three times to destroy them while dodging the yellow rings they attack with and the falling platforms. Once Cortex’s assistant appears, spin him and you will take off the first health bar.

This second phase has Cortex using Lani-Loli, and you will have to jump over the phasing platforms, destroy the Shoot-O-Matics, and spin the assistant when Cortex sends them out. This will be followed by him using the AnnihiLaser, so dodge these lasers and he will eventually use Ika-Ika, so you will need to dodge the lasers upside-down. Destroy the Shoot-O-Matics again and spin the assistant.

The next phase will have many platforms disappearing, and Cortex will use Kapuna-Wa. Sprint to the right and stay on the surviving platforms. Cortex will occasionally slow down time, but if you are paying attention, it won’t cause you too much trouble. When the leftmost Shoot-O-Matic appears, jump on it and destroy it, then run into the bottom-left corner. Wait until the cycle circles back around, then run to the Shoot-O-Matic in the top-right and jump on it. Then run to the assistant and spin it again.

This begins the final phase. Here, you will avoid lasers and destroy all four of the Shoot-O-Matics. Once they are all gone, you will have to fight four assistants, but you know what to do for those. Just spin them and dodge the lasers, and once the final one is defeated, the boss fight is over.