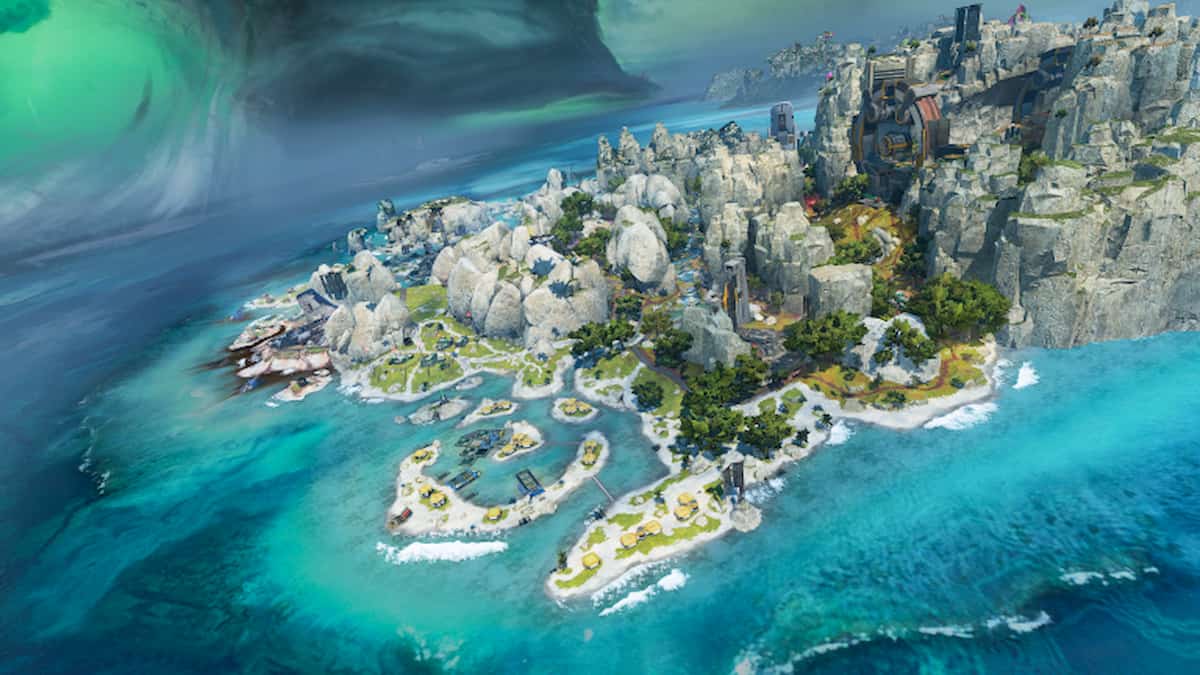 Along with Titanfall’s Ash joining the roster, Apex Legends’ Season 11: Escape will also introduce a new map into the rotation. The fourth map will reportedly go by the name of Storm Point and is bigger than any other map previously seen. That being said, there are 17 main locations for players to get accustomed to, and each varies widely from the other.

Related: All of Ash’s abilities in Apex Legends

Barometer may be one of the hottest places to drop in all of Storm Point, primarily due to it having what Electronic Arts calls “a honeypot of loot.” This area is located on the southwestern side of the map and is one of a few locations surrounded by water.

Despite the map displaying Command Center tucked between a mountain, this point of interest is inside the rock structure. It can be entered by dropping on top of the mountain and taking a series of zip lines from deep within.

One of the most spacious locations in Storm Point, The Antenna, sits near the center of the map. It features a high arching communications dish legends can climb upon, with many buildings sitting underneath.

Located along the northern corner of Storm Point, Checkpoint is bound to provide a haven for players, with it being circled by massive rock walls all around. Within it, there are two levels filled with lengthy buildings worthy of holding potential loot.

Like Crash Site in the Kings Canyon map, Lightning Rod separates itself from most of the map, sitting in the northern-most part of the Storm Point. However, it is the easiest to spot, with its skyscraper-tall rod being one the highest points on the entire island.

Aside from its large outer ring, Respawn has revealed the location holds a smaller room underneath that promotes up-close gunfights. Storm Catcher is found in the eastern section of Storm Point, not too far from the middle of the coast.

If you’re hunting down the safest place to land, North Pad’s tight, long trenches will let you roam with ease. Better yet, this location sits very far on the western end of the map and even holds an overarching tower to mow competition from a high distance.

Sitting near the bottom of the map, The Mill was revealed to bear two massive closed structures, both of which are said to hold “high-value” materials.

Like Airbase before it, Shipfall allows players to venture into a large abandoned spaceship for coverage. At each end of the ship, players will also discover groups of buildings with additional loot.

Like Barometer, Cenote Cave may end up constantly being full of opposing squads. This is because it is one the largest points in Storm Point, along with it holding some of the rarest loot.

Placed above the center of the map, The Wall contains a large building stuck between some of the tallest rock structures in Storm Point. Of course, players will be able to exit this location and make their way to either North Pad or Command Center.

Far into the northeast, legends can discover the Storm Point’s sole redeploy ballon within High Point. Although it is ways away from most locations, Respawn has hinted that there are hidden tunnels connecting this location to other points on the map.

Thunder Watch is one of the smallest places in all of Storm Point, but it certainly appears to hold enough landmarks to find top-notch weapons and shields. In addition, one of Storm Point’s few Gravity Cannons lies at its center for easy travel to nearby mountain tops.

In the heart of Storm Point, Cascade Falls stands in between the many islands and larger land masses. Although it’s unknown how popular this POI maybe, its developer anticipates it to be a battleground.

Launch Site bears a wide-open space for players to lurk along the southern coast. The actual site, in particular, features a control building with supposedly enough crates to handsomely arm multiple squads.

If you’ve taken a glimpse at this map’s location and wondered how in the world you’ll survive, you’re not alone. Fish Farms is by far Apex’s riskiest place to drop, with it stranded by water in the southeastern corner. Thankfully, a Trident is available to use for traveling above its deadly body of water.

Lastly, Gale Station is a smaller area for legends to sit when coming from Fish Farms safely. It is said to have a short supply of crates to open, but the developer has warned the quality of its gear should not be underestimated.