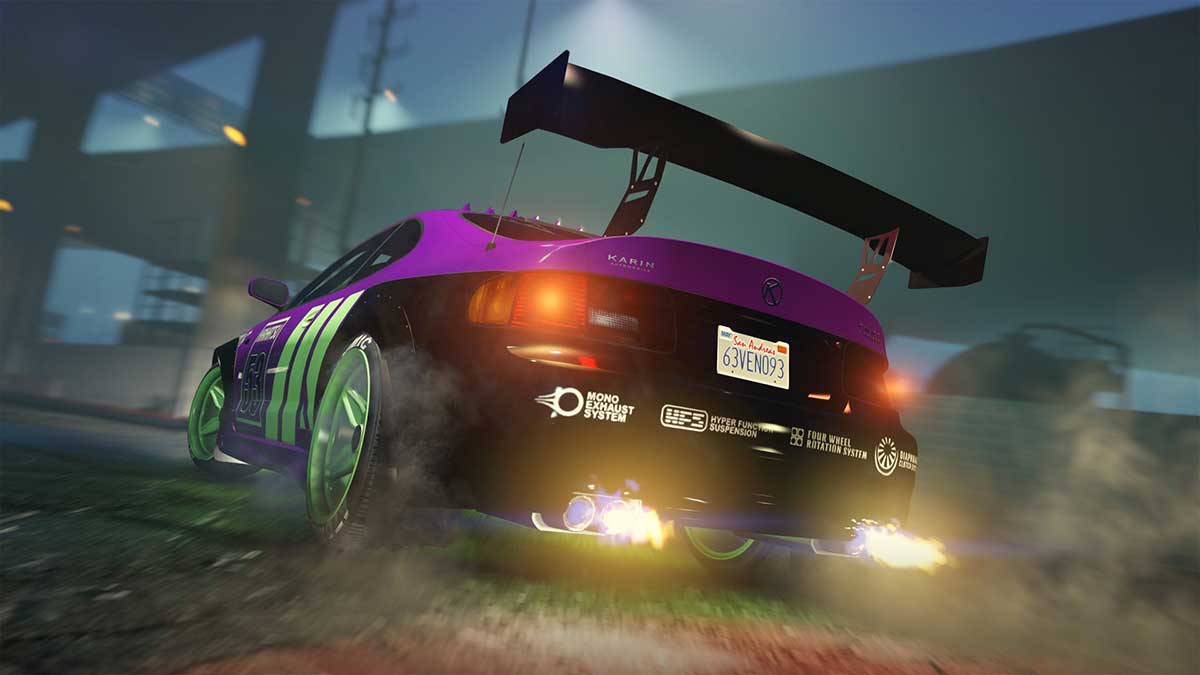 GTA Online: Lost Santos Tuners is finally here, bringing with it a decent chunk of new content for players to race their way through. The one thing we’re all concerned with is the new cars, though. This list covers every new vehicle that’s been added to the game.

At the time of writing, only ten of these new cars are available in the game, with the remaining five plus two bikes coming at some point over the next few weeks. This list will be updated as each new vehicle is released into the game.

The Karin Calico GTF is a reasonably priced new vehicle for this expansion. You’ll have to purchase it from Southern San Andreas Super Autos. The vehicle is a callback to classic 90s cars and looks like it can handle whatever you throw at it, street races, drift events, or just a quiet Sunday drive.

This one is another you purchase from Southern San Andreas Super Autos, not the prettiest car in the expansion. It’s a much more mechanical drive that looks as though it could just as easily smash anything it hits as blow up if it gets knocked in the wrong way.

The Annis Euros is available from Legendary Motorsport for a reasonable price, and it looks brilliant. It’s nothing like the sorts of hypercar that you’ll see in Forza Horizon 4, but it’s the retro equivalent. Expect speed and power with absolutely no braking power from this lime green blur.

Don’t let Dom Toretto find out about this one. You can purchase it from Southern San Andreas Super Autos at a fairly low price compared to the others in this expansion. It’s certainly a car that’s meant for rough rides and modding over speed and showing off. Still, who needs speed when you’ve got family?

Another Legendary Motorsport exclusive. This vehicle packs a tonne of power into a tiny space, though that does make it almost impossible to handle. If you’re looking for something that can squeeze in more donuts than the average Los Santos police officer, this is it.

Another classic from Southern San Andreas Super Autos. Pick this vehicle up if you like your retro racer to come with a sense of style. But, of course, the soft top is always the way to go if you’re heading out for long drives or rallies with friends. Don’t expect a lot of power out of it, though.

If you’ve ever wondered what a pickup truck race car might look like, head over to Southern San Andreas Super Autos. It’s priced appropriately but could still show you a good time if you’re trying to get ahead of the competition using dirty tactics in a nighttime street race.

The Tailgater is another Legendary Motorsports offering. It’s a car that you should know what you’re getting into when you buy it. Tailgaiting is the act of driving so close up another car’s backside that you remove a chunk of wind resistance. If that sounds like your driving style, this is probably the perfect new car for you.

The Jester RR might be one of the most dangerous cars on offer with Legendary Motorsport. Expect zero braking and maximum speed. This car means business, and that business is getting to the finish whether you get whiplash or not.

The final car in the first ten added with Los Santos Tuners is available from Southern San Andreas Super Autos. This car is an old banger, but it can pull you through a race and back again. It’s probably only appealing to those with a soft spot for the 80s, but it’s worth exploring even if you don’t.

Yet to be added

The following are lists of the cars and bikes that are new to GTA Online with Los Santos Tuners but have yet to be added to the game.