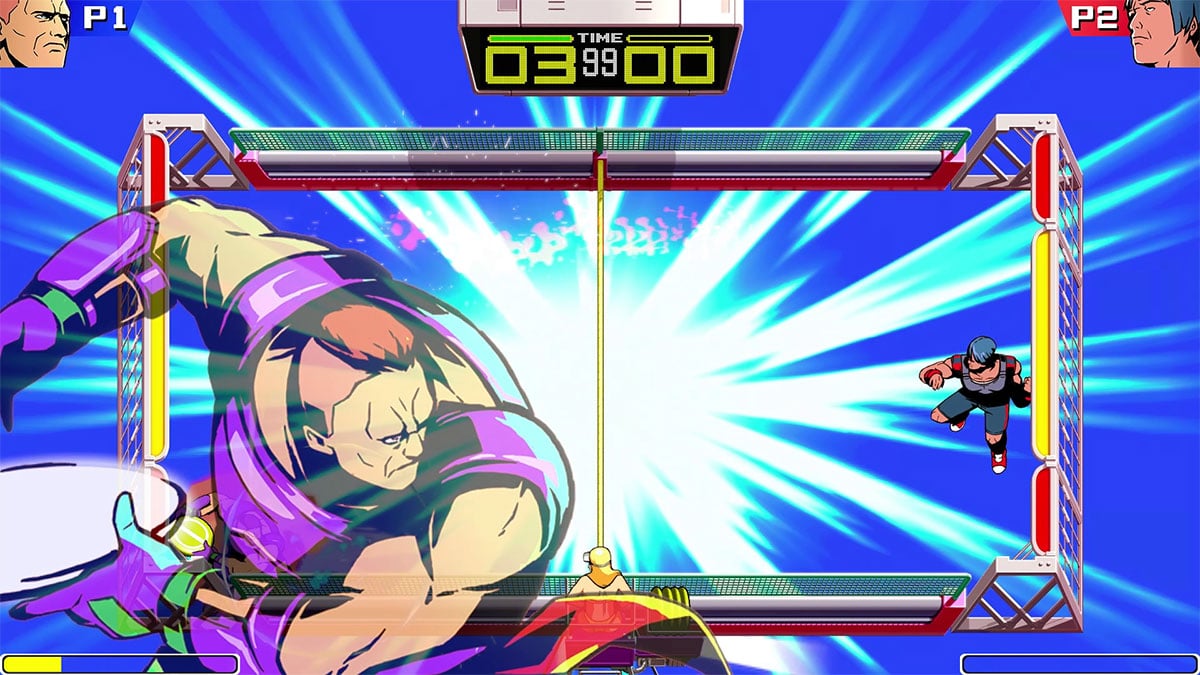 Every character in Windjammers 2 has their own Power Disc shot. Once you’ve learned how to play the game and selected your character, you’ll want to know what their ultimate move looks like. Each pattern is different, but they all serve the same purpose of firing the frisbee at the goal in a tricky way. Below is a list of each character’s special shots.

J. Raposa. The Brazilian’s shot rides the top or bottom edge of the arena before snapping to the opposite edge and moving toward the goal, curving up slightly toward the end. When defending against this one, note which edge the disc clings to at the start, then move toward the opposite edge to catch it. Using the shot closer to the middle of the field gives your opponent a lot less time to get there.

H. Mita. Mita’s shot widely curves up and down as it moves toward the goal, as a distracting amount of green energy pulses around it. This is one of the best Power Disc shots in the game, as it makes it hard for your opponent to see where the actual disc is in the middle of that green mess. You’ll need to really focus on catching it if this move gets used against you.

S. Miller. This is similar to J. Raposa’s Power Disc shot, but without the shift — it slams into the top or bottom edge before hurtling toward the goal, staying on a single trajectory. This is a great choice to use when facing Raposa, as its resemblance to hers will likely trip up your opponent. It’s also a great choice for sending to the opposite edge of wherever you and your opponent are standing. To block it, just stick to the side where the disc first moves.

S. de Lys. The French lady’s special shot is all about timing. It makes the disc pause for a brief moment before rocketing toward the goal in a zigzag pattern. Using this at different spots on the field varies how much zigzagging will actually happen before hitting the goal, but generally speaking, it’s better to use from the back. Stopping it requires a snappy movement as the disc nears the goal.

L. Biaggi. Even though he’s one of the faces of the game, the Italian’s trick shot is, unfortunately, one of the easiest to stop. It sends the disc forward in a whirling pattern, and while it looks cool, it’s easy to catch simply by moving in time with the circular motion of the frisbee. Your best bet is to use it closer to the middle of the field to give your opponent less time to react.

J. Costa. Another of the game’s mascots and another Power Disc shot that’s rather simple. It sends the disc toward the goal in a similar zigzag to S. de Lys, but unlike her move, this one has no false start and a thinner spread. You’ll want to fire it from the top or bottom of the screen when your opponent is at the opposite edge; otherwise, it can be easily blocked by positioning oneself in line with where Costa initially threw.

G. Scott. The American’s ultimate throw is nearly identical to J. Costa’s, but it zigzags in a much wider pattern. You’ll want to use this from the center of the field to get the maximum spread from the throw, as the only way to stop it is to quickly snap up or down in time with the zigzagging.

K. Wessel. This is one of the trickiest moves in the game — it travels forward while snapping at 90-degree angles up and down. Fire it from the center of the field to get the maximum spread on this pattern, but don’t use it too close to the center net to ensure you get the full movement. It’s easy to stop if your opponent is close to or in line with you, but otherwise, it requires some serious hustle and timing to catch at the right angle.

H. Max. The Canadian has the highest power ranking in the game, and his ultimate move is a bit wonky. It starts similar H. Mita’s, curving up and down, but it curves up at a much smaller angle near the goal. This is a good one to use closer to the middle net, as it can easily ping-pong right around your opponent. Otherwise, the best defense against it is to wait near the middle of the goal and step up or down to grab the frisbee.

S. Ho. China’s Windjammers 2 representative has the trickiest Power Disc shot in the whole game, and it even echoes his heritage. When the disc is released, it moves forward with a firework attached to it. It then teleports twice in a burst of sparks, shifting to either the top or bottom of the screen, then vice versa, on its way to the goal. Blocking this one is really difficult, as you need to pay attention to where it first teleports, then move to the opposite edge to block it. Just be sure not to use this shot too close to the middle of the court; otherwise, you’ll only have the space for the disc to teleport once.

Disc Man. Once you’ve unlocked Windjammers 2’s secret character, you can use his Power Disc shot too. It fires in a wide zigzag pattern that leaves behind a trail of bubbles, complete with a goofy sound effect. The bubbles can be a pretty distracting visual, so if you come up against Disc Man in an online match, be prepared to keep a close eye on the disc to catch it when thrown like this. When using the shot yourself, throw from the center of the field to get the widest spread on the zigzag.