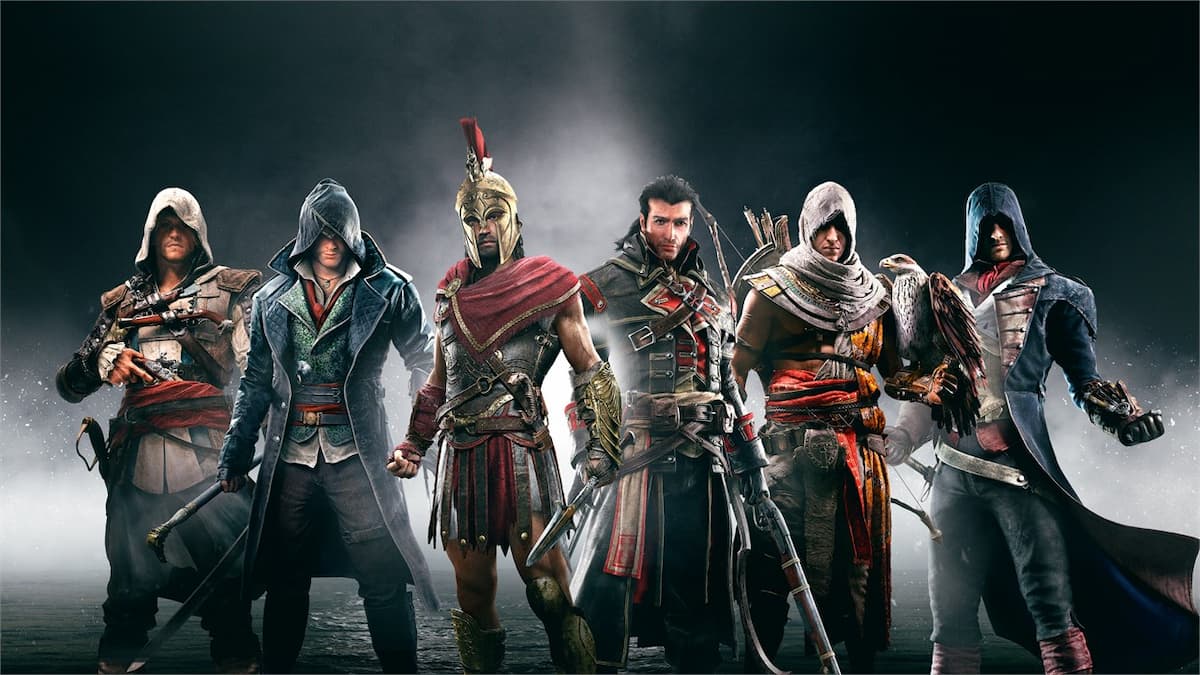 The Assassin’s Creed games make up what is undoubtedly Ubisoft’s most recognizable franchise. Running since 2007, Assassin’s Creed has seen double-digit mainline releases, multiple spin-offs, and even a theatrical release themed around the games. Needless to say, this series will continue to put out content in some form for the foreseeable future. Before that comes though, let’s focus on the mainline games from the past. Here are the Assassin’s Creed games ranked from our favorite to least favorite.

Odyssey is the second Assassin’s Creed game that features the series’ shift to a more RPG style. This game is set in ancient Greece, where you play as either Kassandra or Alexios and fight to take down the Cult of Kosmos. Interestingly, a large majority of this story has little to nothing to do with the Assassins and Templars, only referencing them in the current-day portions. The main story takes place before either organization existed.

Odyssey has one of the best Assassin’s Creed protagonists in Kassandra, a great story and missions, beautiful scenery, and it balanced the RPG and action gameplay better than any other game in the series. For us, it is undoubtedly the best in the franchise.

Assassin’s Creed II was such a massive leap forward from the first game and set the series up to become as popular as it has become. It begins and ends with the game’s protagonist, Ezio Auditore da Firenze, who became one of the most beloved video game characters in the 2000s. The game is set in the Italian Renaissance, where Ezio’s father and brothers have been framed and executed. From that point, Ezio joins the Assassin Brotherhood and hunts down all responsible for the deaths of his family members.

Assassin’s Creed II was revolutionary compared to the simplistic gameplay that was in the first game. The environmental playground was much more fun, and the gameplay had been tweaked to be more fluid.

The immediate follow up to Assassin’s Creed II, Brotherhood took Ezio to Rome, where he needs to rebuild the Assassin Brotherhood’s presence to fight against the Templars. For the most part, this game is very similar to the second main entry, the big difference coming in the reliance on building up your followers and using them in battle. It helped make Brotherhood stand apart from the previous entry and was a fun inclusion.

Origins takes place in ancient Egypt where you play as Bayek of Siwa, who is hunting down the Order of the Ancients following the death of his son. For the developers’ first try at creating a much larger world, they really knocked it out of the park. Wherever you went, there were missions that didn’t make you feel like you were wasting time, and the Egyptian environment was a nice switch up for things.

Black Flag was the first Assassin’s Creed game to have a universally beloved protagonist not named Ezio. This game takes place in the Caribbean during the height of piracy. You play as Edward Kenway, a pirate who kills an Assassin and takes his clothes to infiltrate and become one with the Brotherhood. From there, he sets out to set up a republic for the sea’s pirates to be free from governing bodies.

Black Flag is not the first Assassin’s Creed game to feature naval combat, but it was the first to make it feel worth the investment. The pirate elements in this game are excellent, but everything else — story, gameplay, and characters outside the pirates — are a little forgettable.

Syndicate is the final game in the series to feature the “traditional” Assassin’s Creed formula. You play as the twins Jacob and Evie Frye as they make their way to London to help establish a Brotherhood presence. While there, they become integrated with the local gangs and meet a lot of Templar resistance.

The worst thing about Syndicate was that it was more of the same at the time of its release. The most significant change in gameplay was a new grappling hook to scale up buildings quickly, but other than that, players were desperately ready for a break from the Assassin’s Creed games. Regardless, this is a quality game with a good story, likable protagonists — including the first playable female Assassin — and fun gameplay.

Valhalla is the third RPG title in the Assassin’s Creed series and follows Eivor, a Viking looking to build a new settlement under their brother, Jarl Sigurd. Throughout this game, Eivor interacts with Odin to help put emphasis on the decisions they make, but it takes a long time for any of that to pay off. The most significant addition to the gameplay compared to past games is the ability to raid other settlements for resources.

Compared to Origins and Odyssey, Valhalla has the weakest protagonist and overall story. That being said, this is the best-looking title to date, being the first to have a version on the PlayStation 5 and Xbox Series X.

Assassin’s Creed: Unity takes place in Paris during the French Revolution. You play as Arno Dorian as he is introduced into the Assassin Brotherhood after being accused of murdering his adoptive father. While Arno has an ancestral history in the Brotherhood, his adoptive family are Templars.

Unity received a lot of hate upon its release because of the myriad of bugs and stability issues at launch. That being said, for the first release exclusively on PlayStation 4 and Xbox One, this game had a fun environmental playground with some much-needed adjustments to the parkour system. If you missed Unity because of its issues at launch, we highly recommend giving it a try now.

Revelations is the final chapter of Ezio’s story set in Constantinople, where he is hunting down a weapon the first protagonist in the series, Altair, had hidden away. Ezio is still great, and the gameplay here is very familiar to the other two games starring him. The most significant change is one of Ezio’s hidden blades being replaced with a hookblade that lets him zipline across the area and pull enemies towards him.

Revelations was a good send-off for Ezio but didn’t nearly reach the heights of his other two games. Seeing Altair and living through his memories was a nice touch, but at that point, it had not been necessarily a long time since we saw him, so it did not feel nearly as memorable as it might if they were to do it today.

Releasing the same time as Unity, but only for the PlayStation 3 and Xbox 360, Rogue was another ship-focused game that saw you play as an Assassin-turned-Templar named Shay Cormac. This game came at a time where a lot of these Assassin’s Creed games were focused on showing how corrupt the Brotherhood could be, so playing as a Templar at this point is not as surprising as you might think.

Rogue did not really light the world on fire and maybe is the most forgettable game in the series, thanks to releasing the same day as Unity. It does provide a slight look at Haytham Kenway before his journey to America in Assassin’s Creed III, if you are interested in that character, and a reference to Arno from Unity. Still, primarily, this game isn’t that important in the grand scheme of things.

Assassin’s Creed III introduced Haytham Kenway and his son Connor, or Ratonhnhaké:ton to go by his indigenous name. The game starts with Haytham arriving in America after the events of Rogue and revealing his Templar alliance along with a relationship he gets into with a Native American woman. Years later, you take control of Connor, who seeks to become an Assassin after the Templars attack and destroy his home village. The rest of the game focuses on Connor becoming more ingrained with the events of the Revolutionary War alongside George Washington and the conflict of working both with and against his Templar father.

To put it simply, Connor is one of the worst protagonists in the Assassin’s Creed series, and the environment in this game is not fun to traverse. There are little to no parkour sections, with a majority of the upper ground relying on you to climb and jump between trees. There isn’t much here to recommend someone to go back to.

This is the game where it all started. The first Assassin’s Creed stars Altair Ibn-La’Ahad, who works to gain back his honor after foolishly ruining an attempt to retrieve an artifact by trying to kill a Templar head. Until you reach the end of the game, that is essentially the whole story. There isn’t much to it, honestly, and the gameplay is highly repetitive. There’s a reason Ubisoft has never remastered this title compared to the many others they have. There simply is not a lot that would be enjoyable to revisit.